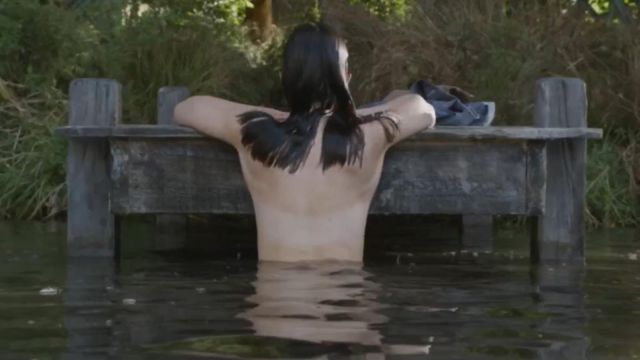 The slasher genre has died off in recent years as horror became increasingly mainstream and safe with its violence, but A24 had no issues releasing the divisive film X.

The Ti West-directed film sees a group of young people drive out to the middle of nowhere in Texas to film an adult video, only to slowly realize a cruel cate would await them. Starring queen of the eyebrow-less Mia Goth, it saw fans completely unsure of what they’d seen, and the debate continues to rage on.

A supposedly meta-slasher film that tries to subvert the tropes by falling into the tropes, X still has horror fans talking on Reddit.

The film hinges on Goth playing both the main character and the villainous serial killer, with her putting on huge amounts of makeup and prosthetics to look as if she’s a harsh wind away from death. Thematically, it’s absolutely sound and there are big proponents of West’s vision.

What is horror if not the “virtue-less teenagers” getting their comeuppance from an anti-sex figure, which is displayed painfully obviously in X. Staying heavily on the theme of youth being wasted on the young, the sex is essentially an afterthought here to many.

West has done the homage to horror many times before, and some audiences are starting to get a bit sick of it. As articulated by one comment, why watch the homage when you can just watch the infinitely better originals they’re referencing? West’s strength throughout these films is definitely his cinematography and way of going about his themes.

X has now spawned a prequel titled Pearl, which follows the origins of the serial killer and what made her the way she is. Pearl and X are only available to rent, with them purchasable on Amazon Prime Video, Apple TV Plus, and YouTube.