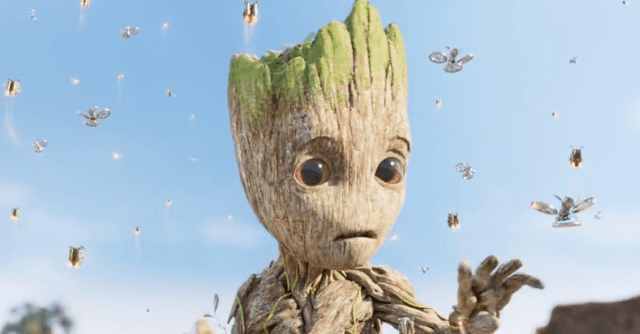 Baby Groot returned to our screens this week for the animated miniseries I Am Groot, which may have lasted all of five seconds, but Marvel fans appreciated it all the same for offering up more of the adorable infantilized sequoia. The talking tree’s toddler form has been a huge hit with audiences, ever since debuting as a sapling at the end of the first Guardians of the Galaxy and playing a much bigger role in Vol. 2.

But there’s something we’ve always wondered about Baby Groot that creator James Gunn has now finally cleared up. One fan was left curious by an allusion to Groot’s self-sacrifice in the first film in I Am Groot, suggesting Baby Groot shares his adult version’s memories. Gunn declared, however, that this definitely isn’t the case as they are essentially two different beings. Having said that, Baby Groot has probably been told about his “father” by the Guardians.

“He does not (in the same way I don’t remember what my father did – OG Groot is not his “self”),” Gunn explained. “But I’m sure he’s been told the heroic stories thousands of times by his galactic parents.”

Gunn’s comments remind us of something that he’s always maintained about Baby Groot, but which fans often forget: Baby Groot isn’t just Adult Groot reborn but is a new, if related, life form grown out of his remains, very much like a clone. So just like a clone doesn’t have the memories of the being it shares genetic material with, Baby Groot doesn’t remember Adult Groot’s life.

Chronologically speaking, we most recently saw Groot 2.0 in Thor: Love and Thunder, where he was still a teenager. He’s expected to have grown out of adolescence by this December’s The Guardians of the Galaxy Holiday Special and next May’s Guardians of the Galaxy Vol. 3. As for I Am Groot, that’s either set during Guardians Vol. 2 or else simply not part of MCU continuity, according to Gunn himself.