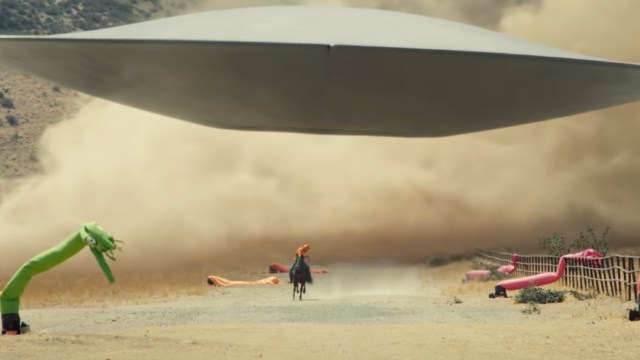 Jordan Peele‘s Nope may have worked perfectly well as a stand-alone sci-fi thriller that won over fans and critics alike, but there may be an expansion to the world set up in the film in the works, if a recent tease by Peele is any indication.

Something eagle-eyed fans have spotted on the Nope IMDb page is the fact that there is a mysterious character — who was ultimately cut from the finished film — called Nobody, played by Michael Busch, which has spurred fan theories and speculation. Addressing the Nobody character, Peele told The New York Times,

“The story of that character has yet to be told, I can tell you that. Which is another frustrating way of saying, I’m glad people are paying attention. I do think they will get more answers on some of these things in the future. We’re not over telling all of these stories.”

The remark certainly seems to hint that a Nope sequel could very well be on the way. And although one could interpret the first film as a stand-alone story, there are other indications it may be a more open-ended story than what it initially appeared to be, as We Got This Covered previously reported.

For instance, Brandon Perea, who plays Angel in the film, mentioned in a recent interview with SyFy Wire that he convinced the filmmakers not to kill off his character as originally intended, even though a viewer could draw such a conclusion upon initial viewing. What’s more, the person who helped design the film’s creature, John Dabiri, has also hinted in a separate interview with Thrillist that the extraterrestrial may have survived the events of the movie, despite appearing to bite the dust by accidentally ingesting a balloon at the end.

All of these revelations certainly make us want to go back and watch Nope again to see if there’s any hidden sequel bait we missed that would make even the most iron-willed space manta ray hungry for more.