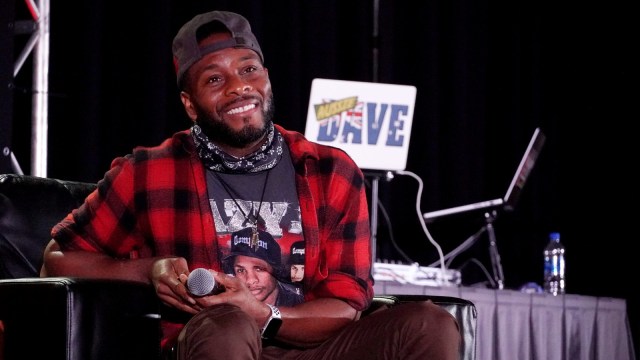 Kenan & Kel star Kel Mitchell discussed his new children’s book, addressed whether a Mystery Men 2 might ever happen, and recounted some memories involving his longtime friend, Kenan Thompson, including how the pair narrowly escaped getting out of trouble after they took an unauthorized studio tour in a golf cart at a recent Q&A panel he hosted at Rose City Comic Con in Portland, Oregon.

Mitchell recently made a cameo at the Emmys where he reunited with host Thompson, which set the Twittersphere on fire. That appearance apparently wasn’t a one-time fluke, as Mitchell confirmed he’s “still really good friends” with Thompson. Mitchell said he even visited Thompson in New York at 30 Rock, where Saturday Night Live is filmed, while promoting his new children’s book, Prank Day.

“He was on his way to LA to go do the Emmys. But we stay in contact all the time. I’m super excited for him.” Mitchell added he thinks it’s “super cool” Thompson got to host the award show.

‘Prank Day’ was inspired by classic adventure movies from the 1980s

Mitchell’s new book, Prank Day, imagines a world in which a series of April Fool’s Day pranks suddenly come to life. Mitchell explained that having kids and being a fan of ‘80s fantasy movies inspired the book, which was illustrated by Santy Gutierrez

“I have kids and I love reading books to them. And also too, I grew up watching like Back to the Future and you know My Science Project and all those type of movies, 80s movies. I just wanted to do a book and a project that had that same adventure, like you don’t know what’s going to happen at the end type of thing. And so yeah, came up with this great idea and it just expanded from there.”

Aimed at 8-12 year-olds, the laugh-out-loud novel follows the misadventures of Chase, a kid who coordinates a series of epic pranks on the first day of April. On April 2nd, he is horrified to find the “tricks become reality in hilarious and disastrous ways,” forcing Chase to own up to them. The book’s synopsis continues:

“How will he set the world right again, catch the eye of his crush Zoe, and keep her from getting flattened by the refrigerator running all over town?”

If you want to get a taste for Prank Day, Mitchell also released an animated short from the book on his YouTube channel, which you can check out below:

Prank Day is currently available on Amazon or wherever you like to buy your books.

During the panel at Rose City Comic Con, Mitchell made a special shout-out to fans of Mystery Men, the comedy film about misfit superheroes he starred in alongside Ben Stiller, Janeane Garofalo, and William H. Macy, among many others.

“You know, Ben Stiller said he wanted to do a [Mystery Men] 2, so I don’t know, we might have to do it. I have to suit up,” Mitchell said.

When asked how much of the first Mystery Men film was improvised, Mitchell said “Probably like 100 percent.”

“They were like my big brothers at that point. And you know, big sisters, with Janeane Garofalo. And I just had a blast with that film. You’re talking about so many great comedians, it was like an all-star cast to be on. And everybody wanted to up each other on the jokes. And so we have so many bloopers and stuff that didn’t make it into the film, that it’s like super super hilarious, they really need to put that out like on a DVD or something.”

Mitchell also teased that he has an upcoming Christmas movie coming out this Holiday season called All I Didn’t Want for Christmas, in case you’re dying to see him in a film while we wait for Mystery Men 2 to hopefully one day be made. Mitchell called the Holiday film “super fun” and that he’s “super excited about that.”

When Mitchell was asked about a story the panel moderator heard about involving him, Kenan Thompson, and a golf cart, Mitchell recounted a hilarious anecdote where the pair almost ended up getting into a bit of trouble from Universal Studios security due to taking an unauthorized backlot tour. Surprisingly, some of the duo’s famous characters from an All That sketch are also part of the story.

“Kenan and I, we took a golf cart at Universal Studios, right. We took it to the backlot of Universal Studios — not supposed to do that, right. So…and we’re riding around and we see the tram, like the tour tram going by and we’re looking at everything that all the tour people see. Like we see the Psycho house, we see Jaws, all that stuff. But we’re on the wrong thing, which is a golf cart. And we get to the Jaws part and it’s water coming around. All of the sudden we see lights, security is coming after us now. And security comes and they’re like ‘yo, hey! You can’t be here!’ But here’s the kicker, though, we were dressed as Mavis and Clavis. So I’m like hey, me and Kenan talked and was like, ‘yo, stay in character. We’re two old men and didn’t know what was happening.’ So we were like, ‘Ahh, I don’t what’s going on here, I just took a wrong turn!’ And we got out of it, you know. Gotta stay in character.”

Kel Mitchell opens up about his struggles with anxiety and depression

Mitchell is now a youth pastor and has published a book about his spiritual life called Blessed Mode, for which he also created an accompanying Christian-themed rap song of the same name. When asked by the panel moderator how he got in touch with his spiritual side, Mitchell explained how he went through some struggles in life.

“A lot of different ups and downs in my life, right. And I think we all deal with that, just adulting. And then ‘adulted’ within the limelight as well. But just dealing with a lot of different things that I got breakthroughs with, with depression, anxiety, all those different things. And the Lord was always with me. God was always with me. So I would be doing everyone a disservice if I didn’t let them know how He got me through, you know?”

You can catch Mitchell in MTV’s Deliciousness, where he stars alongside Tiffani Thiessen, Angela Kinsey, and Tim Chantarangsu, as the comedic actors give their hilarious hot takes on funny food-related clips from around the internet. Mitchell called the show, which is in its third season, “the best gig ever.”