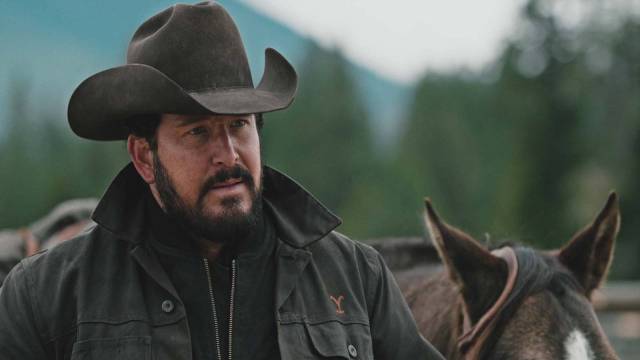 Hey all you Yellowstone fans, we hope the start to your work week is as smooth as the pickup lines Teeter hurls at Colby any chance she gets! As always, we’ve taken a dive into the big Yellowstone news stories of the day, and we’re mixing the new and the old, the future and the past. Denim Richards gave an interview where he shared a bit about the backstory he’s got in his head for Colby, as Finn Little shared another beautiful image from the Yellowstone Dutton Ranch.

Yellowstone‘s official YouTube also shared an incredible video about the most dramatic Dutton family meals. While there were a lot of laughter and drama to be had, the video also focused on an essential part of the continuing storyline. Rip Wheeler is the backbone of the Dutton family, not just as John Dutton’s right-hand man. So let’s sit down, grab your favorite Yellowstone-inspired drink, and buck into today’s stories.

Denim Richards sat down with Chatting With B for an exciting interview where fans could tune in and ask the actor questions about everything from his personal life to his role as Colby on Yellowstone.

When a fan question from Reddit was featured, our ears perked up immediately. It’s the kind of question that is so exciting to get an answer to, because the actors and actresses are allowed to give some of their own insight into the characters we know and love.

Richards was asked to describe what he thinks would be an excellent backstory for Colby.

“I think an interesting storyline for Colby, I mean — to even try to throw anything into the ring because Taylor does such a great job. I think if you were like saying like, selfishly, if you add something for your character, I think it would be interesting to see if the place that I left the place that I left before I got to Yellowstone, if that place would ever come after me on the Yellowstone to try to bring me back.”

He went on to say that he imagines that Colby was working with someone very close to him before this, but that things were taking a different direction than what Colby wanted, so he had to make a choice for himself.

“So I kind of imagined Colby’s storyline that he was working with his dad and that his dad owned a mini Ranch, but I think that his dad wanted him to be like him and Kobe wanted bigger, and so I think he just left. I’m waiting to see I think Kobe is always waiting to see if his dad is ever going to come and force him to come back to their smaller ranch and see what that interaction would be like and navigating that.”

As big fans of Colby, we’d love to see something like that happen on the ranch, especially if the relationship wasn’t severed because of something tumultuous brewing under the surface; if it was just a matter of him wanting something bigger — what would it look like if his dad came to get him? What would happen when the other ranch hands had to look after one of their own?

Rip Wheeler is the glue that holds the Duttons together

We shared this with you last night, but we had to mention it in today’s round-up just in case you missed it; the video Yellowstone‘s official YouTube account shared yesterday of the most dramatic Dutton family meals, a feast of everything fans of the series love so much. It’s also a critical nod to Rip Wheeler’s power in the family, as the final scene in the video highlights.

The series is heavy on drama, and for almost 20 minutes, you’re given a seat at the table to witness it firsthand. One of our favorite scenes is most definitely the brunch with John, Summer, and Beth, a breakfast John said he couldn’t have imagined even in his wildest dreams.

Another stand-out meal full of Dutton drama? When John asks Beth, Rip, and Carter to join him at the table. As usual, Beth’s topic of mealtime conversation isn’t exactly good for the senses — although it is good for the prostate, as she says several times, and when she’s questioned about her behavior, she storms out.

Rip excuses himself and confronts Beth; she tells him it’s the fantasy of a fake happy family at a big table that she can’t stand, and he immediately offers her a solution. They can have supper at another table — the one in the room they’re now standing in, as a matter of fact.

When the meal resumes at the smaller table, everything is safer somehow. Beth is noticeably more at ease, and the smiles and laughter that fill the room aren’t of a false-hopeful family, but a real one. Beth thanks him, and the look that Rip gives her at that moment — it’s the look people dream about; it’s a reminder that she’s home with Rip.

It’s a sweet moment, full of usual Dutton sass and drama, of course, but it’s a nod to the way that Rip Wheeler isn’t just a ranch hand; he’s the glue that holds them all together.

Finn Little is giving fans a look at the beauty of the Montana skyline with a new behind-the-scenes snap at the Yellowstone Dutton Ranch.

Little’s peeks into the daily life of our favorite Yellowstone characters are valued by fans who always hope to be part of the series. As everyone from local hat-makers to cast members are aware, fans want to be part of the Yellowstone Dutton Ranch. They hope to exist in a realm where they can be a John or a Beth, a Rip or a Colby — they want to know what it’s like to be that powerful and confident.

We might not get to live on the ranch, but we do get a fascinating look at what it would be like, and fans don’t take that for granted. Little’s picture is a clear sky above a stunning backdrop, and it’s enough to slow you down for a moment so that you can take it all in.

If you’re missing the ranch, you can watch the first four seasons of Yellowstone streaming now on Peacock, and don’t fret; the wait for Yellowstone‘s fifth season is almost over. There are only 54 days until the two-hour season premiere, which will be intense.