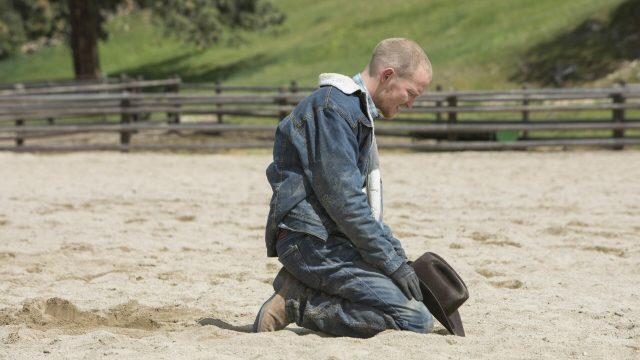 Happy Wednesday, Yellowstone fans; it’s another busy day in Taylor Sheridan’s universe ahead of the season five premiere on Nov. 13. With just a few days left until we see the next chapter for the Dutton family, we’re looking back at what got us here. From the promise John Dutton made to his father so many years ago to the new career path he’s embracing to keep it, the story is only growing more layered and complex by the episode. Gil Birmingham, who breathes life into Chief Thomas Rainwater, talks about the importance of Native American stories Yellowstone tells as Jefferson White pays homage to fans and the recognition they give to the series. You know the drill from here, everyone; grab your Yellowstone-loving bestie and your favorite drink because we’re riding in!

Gil Birmingham spoke with San Antonio Magazine about playing Chief Thomas Rainwater on Sheridan’s hit series and how he’s always felt a pull to the genre of a good western project.

Of course, season five is changing things for everyone in the series, including Rainwater and his people, who have been walking a path resembling friendship with John Dutton. Friendship might be a strong word, but Rainwater and Dutton certainly grew to become something more than frenemies, especially in recent seasons.

However, John’s new position of power is changing some things for everyone, and everyone must make hard choices.

“It’s more convoluted in a way that’s going to put people in positions to make very difficult choices. That’s either legally, morally, ethically or physically. There’s a lot of moving parts, and some new characters that come in are really going to push it to another level.”

Another level sounds exciting, and it will be, but Birmingham has already said that he’s unsure of the future of his relationship with John Dutton. Likely because Rainwater still has his people to think about, and their connection with the land is of the utmost importance.

“One of the most important aspects of any indigenous person and their identity is the connection to the land. That’s a main theme of Yellowstone.”

Continuing, Birmingham says that he’s always been a fan of westerns but that there isn’t always the proper perspective or portrayal of indigenous people.

“I’ve always loved Westerns. But, as a native person, I’ve always had a different perspective about the portrayals of indigenous people. They were always shown in such a marginalized way.”

Yellowstone is a series that changes that. Like Birmingham says, it pays honor to the story and the honesty of Native American voices and the struggles they often face where land and their freedoms are concerned in this genre of storytelling.

Jimmy is one of those characters you can’t help but adore, and Jefferson White says the feeling is mutual. White and Wes Bentley talked about Yellowstone being snubbed during awards season, but they said that the love fans show for Yellowstone says it all.

The New York Post shares the following quote from White, paying homage to the fans and the power of their adoration for the series.

“I hope this season does get awards because I love these actors, and I think they are doing amazing work. I hope that other people recognize that, but also, it really is true that the fans’ response to it is the recognition that these actors deserve, and we are so lucky to have that.”

We have to agree with White, we certainly hope this next season is the one where the series and their hard work are finally recognized in an award setting, but if not — they know that viewers worldwide are constantly singing their praises.

“I Want to be Him” is the sixth episode of Yellowstone‘s fourth season, and it packs quite a story. We see Lloyd explode again in this episode, smashing Walker’s guitar and further showcasing that love (and lust) can make people do crazy things.

Lloyd is established and beloved, someone fans adore, and this arc for his character was heartbreaking to watch. Someone with a less painful arch is John Dutton, who got close to a particular woman we met in the last episode.

Her name is Summer, and Beth is ready to kill her when she walks out into the kitchen and sees a woman in her father’s shirt. It doesn’t get any better when she realizes that it’s not a stranger in their home but a visitor of her good ol’ dad’s. Beth isn’t on board with this fiasco, and Summer even tells John that Beth is a little old to be getting jealous of women her father brings home.

It’s more complex than that, but we have to admit; we did love seeing someone other than family try to make it through an awkward meal at the table with Beth. The girl doesn’t understand the importance of a peaceful meal and isn’t planning on taking a lesson on it that morning.

More awkward family conversations take place when Jamie confronts his biological father about being responsible for the attacks on the Dutton family. Garrett Randall doesn’t take too kindly to the conversation and tells Jamie that the Duttons aren’t his family and that he doesn’t plan to stop trying to kill them until the job is done — talk about an unfortunate turn of events.

Of course, Jamie hears the message his father is sharing and realizes that he will have to pick a side soon, even if it’s the last thing he wants to do. Now, he feels he’s been wronged by two fathers, which does a number on him.

The scene that truly broke our hearts happens in this episode, and it goes back to Lloyd and Walker. After things get unruly between the two again, Rip steps in and lays down the law once and for all by breaking Lloyd’s hand. Yes, he doesn’t just hurt his pride and ego; he threatens his livelihood and ensures that Lloyd will have a heck of a time trying to be a ranch hand for the foreseeable future. Is it finally enough to break this high school-level fight between Lloyd and Walker? We sure hope so.