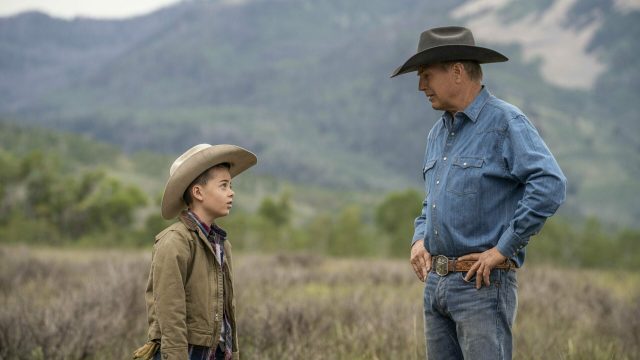 Paramount’s number one series, Yellowstone, is sharing a highlight reel for one of the most beloved characters in the series ahead of season 5, and it’s an emotional ride. That’s right; we’re wishing you all a happy Tuesday as we get a little choked up about Tate Dutton’s growth across the series’ history so far. In addition to a video that put us right into our feelings, fans are talking about a specific Dutton bond in season 2 that has changed almost as drastically as Tate over the course of the episodes. Which characters have been on the most dramatic journey together so far? The answer is easily Beth and Jamie, siblings who once relied on each other that now mix about as well as oil and water. So from the heartwarming to the heartbreaking, here’s a look at the exciting news in the Yellowstone universe today. You know the drill, let’s ride in.

Tate Dutton gets a highlight reel

Tate Dutton is the latest Yellowstone character to get a highlight reel, and his is quite an emotional one. We know, as a character, we’ve seen him grow up a lot throughout the last four seasons — but we didn’t realize how much until we watched the video. Tate is a character that has always seemed wise beyond his years, full of light and laughter, but he’s walked a hard path.

One of the most challenging and devastating pieces of the Dutton puzzle happened to Tate when he was kidnapped due to the enemies of John wanting to get back at him. We saw a different child after that experience, as is to be expected, but it led him down a path of growth and courage. Tate had to fight through fear and battle demons, and he was lucky enough to come out on the other side because of the people who loved him so much.

John, Kayce, and Monica Dutton all give life to Tate in their own ways, loving him through tragedy and turmoil in addition to giving him life lessons and adventure to help him through experiences that are both blessings and curses.

We love Tate and his tenacity, and we can’t wait to see what his future looks like in season five and beyond.

Fans are looking back at the history between Beth and Jamie

A Reddit thread is looking back at the tumultuous relationship between Beth and Jamie and how it seemed to be less painful in earlier episodes, specifically across season 2 of Yellowstone.

Now that’s not to say that the two were the best friends for as long as we’ve been tuning in, but they did share a different dynamic before the series began, before Jamie made a choice for Beth, and before she allowed herself to be in love with Rip Wheeler.

So how do those things coincide? Well, it’s a long story, but it’s worth a read. Beth and Jamie were close when they were younger, so close that she knew she could trust him when she needed to make a life-altering decision. At a young age, she found out that she was pregnant and asked him to help her “take care of it.” Jamie agreed, but he took her to a health clinic on a reservation so as not to get their “name” involved. The office assistant found out who the family was and told Jamie he should take her somewhere else, but he refused; she then said Beth would be sterile after the process.

Jamie didn’t tell Beth that part of the equation when he told her to come inside, and that’s been a point of frustration in their bond, to say the least. They’ve also been at odds because of the personal frustration they cause one another in the struggle for power and admiration.

A fan pointed out that Beth seemed more kind to Jamie before and that she had advice for Kayce, too. Kayce and Beth have never had the trouble in their bond that she shares with Jamie, but they’ve caught each other on a bad day, too. That’s normal with sibling relationships, however, and you can tell they care for one another.

With Jamie, there’s less space for wiggle room, especially if he’s doing something that she sees as going against the family.

As the trailer for season 5 shows, Jamie and Beth will have to work together next season — and we can’t wait to see what that relationship will look like as John takes on his new role as Governor of Montana.

“Only Devils Left” is the title of the fourth episode of season 2, and it’s as fitting as ever. A quote within the episode brings the title to life, but it’s also the constant truth in every scene and piece of the action.

“All the angels are gone son, there’s only devils left.”

There’s a battle raging at the Yellowstone, and that idea itself isn’t newsworthy, but it is essential to take note of. The fight is multifaceted, as usual: outsiders are trying to bring a great demise to the Dutton family as the family itself is facing off against one another. Beth is hell-bent on causing pain for Jamie in any way she knows, as Kayce is torn between missing his wife and honoring his father.

We also see Kayce getting to work alongside his father, which is helping to curate that divide in his heart. For as much as he tries to avoid his life at the ranch, he’s good at it. He fits into the role well; it’s as if he was born to help carry on the legacy of his name and his family’s work. In fact, he was sort of born to do it.

Other pieces are in motion here, but those seem to be the most important. The Dutton family is constantly in a fight, and there’s always a devil ready to throw in their hand. Here’s hoping they’re strong enough to fight against the evil, and to do so together.