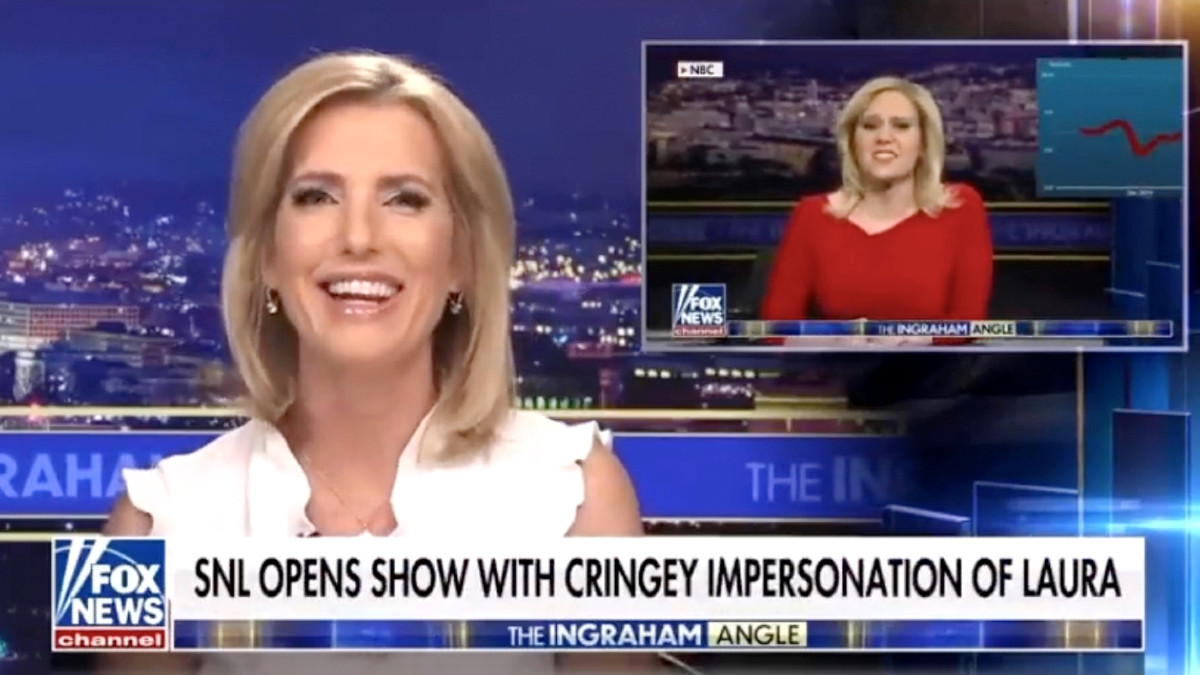 If the saying goes “imitation is the best form of flattery,” then it was clearly lost on Laura Ingraham, who tore into Kate McKinnon Monday night. Ingraham called attention to McKinnon’s impersonation featured in the cold open on last weekend’s Saturday Night Live by attempting an impersonation of McKinnon impersonating her.

In the SNL sketch from this past weekend (which we concede was hardly flattery), McKinnon spoofed Ingraham’s trademark bombastic delivery while exaggerating the failures of the Biden administration — claiming, among other things, that gas now costs $19 per gallon and “the Green M&M’s been canceled just for being a whore.”

Perhaps another saying Ingraham could acquaint herself with is “don’t feed the trolls,” because, on Monday night’s The Ingraham Angle, the 58-year-old tried to go full McKinnon, and it didn’t go well. At best, she appeared deranged, and at worst, she appeared to be having a stroke.

“The reason I like Kate McKinnon and I have so much respect for her as a talent, she’s so even-handed in her political commentary,” said Ingraham, while smiling vapidly and bobbing her head around. “But seriously, think of all the low-hanging fruit provided by Joe Biden and Nancy Pelosi, little Petey B [referring to White House press secretary Jen Psaki] on a daily basis. I mean, I think this is kinda comedy gold, don’t you?”

Well, the difference, which always seems to evade Trump and his sycophants, is that Saturday Night Live is a comedy program, whereas Fox News is presented to viewers under the guise of news. If Laura Ingraham did care about reporting legitimate news, there’s plenty to be found between an ongoing global pandemic and a Senate investigation into a former sitting president who allegedly attempted to incite a coup and overthrow U.S. democracy.

Not that McKinnon needs defending, but after the clip started making the rounds, plenty of others jumped into the fray to slam Ingraham for the cheap impression.

“Laura Ingraham is spitting jealous of Kate McKinnon,” tweeted writer Tara Dublin, who also added a tidbit about how Ingraham inserted herself into the Jan. 6 debacle.

Writer and comedian Danny Gallagher pointed out that McKinnon may actually have tricked Ingraham into doing the most accurate Laura Ingraham impression ever.

“In a world full of Laura Ingrahams, be a Kate McKinnon,” tweeted The USA Singers.

In case you missed McKinnon’s skit, check it out: