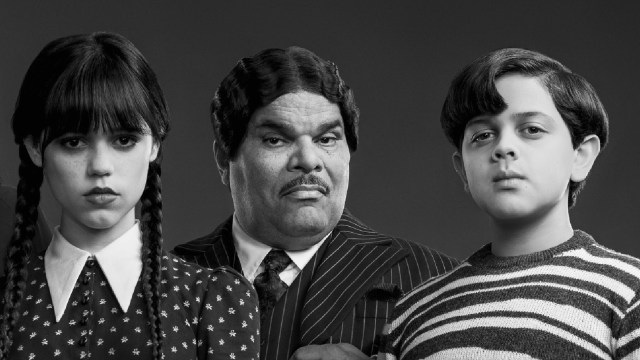 Fans of Luis Guzmán are coming to the actor’s defense after his first look as Gomez Addams was revealed for the upcoming Netflix show Wednesday.

Though the actor looks quite a bit different than Raul Julia, whose portrayal of the character in the 1990s The Addams Family duology of films remains iconic to this day, many fans pointed out that Guzmán arguably more closely resembles the original The New Yorker comic strips by Charles Addams than any other live-action adaptation that has come before.

“I love Raul Julia’s version but here it’s more faithful to the original comic strip,” one fan wrote. And when you see the side-by-side images, it’s pretty hard to disagree.

Another commentator questioned why people were “complaining” about Guzmán as Gomez when the actor clearly “looks like the actual OG Charles Addams Gomez!”

Another fan said Guzmán looks “by far the most accurate version of Gomez Addams.”

In the original Vanity Fair article where the first look images were unveiled, they even said the Tim Burton-helmed show “hewed closer to the original design of cartoonist Charles Addams that first appeared in the pages of The New Yorker.”

Clearly, some were put off by Guzmán’s casting in the show. However, many found such a backlash — in and of itself — to be far more distasteful.

“Gomez looks like the original cartoon strip again and if you don’t think Luis Guzmán is hot (which I’m seeing in the replies), that’s a you problem,” one Twitter user wrote. “I love this 😍.”

Another commentator said they predicted “some boring ass haters” would show up after Guzmán’s casting announcement, about which they were sadly correct.

Another Twitter user indicated they were simply “happy for” Guzmán that he landed the role, regardless of the show’s success.

Wednesday is expected to premiere on Netflix later this year.