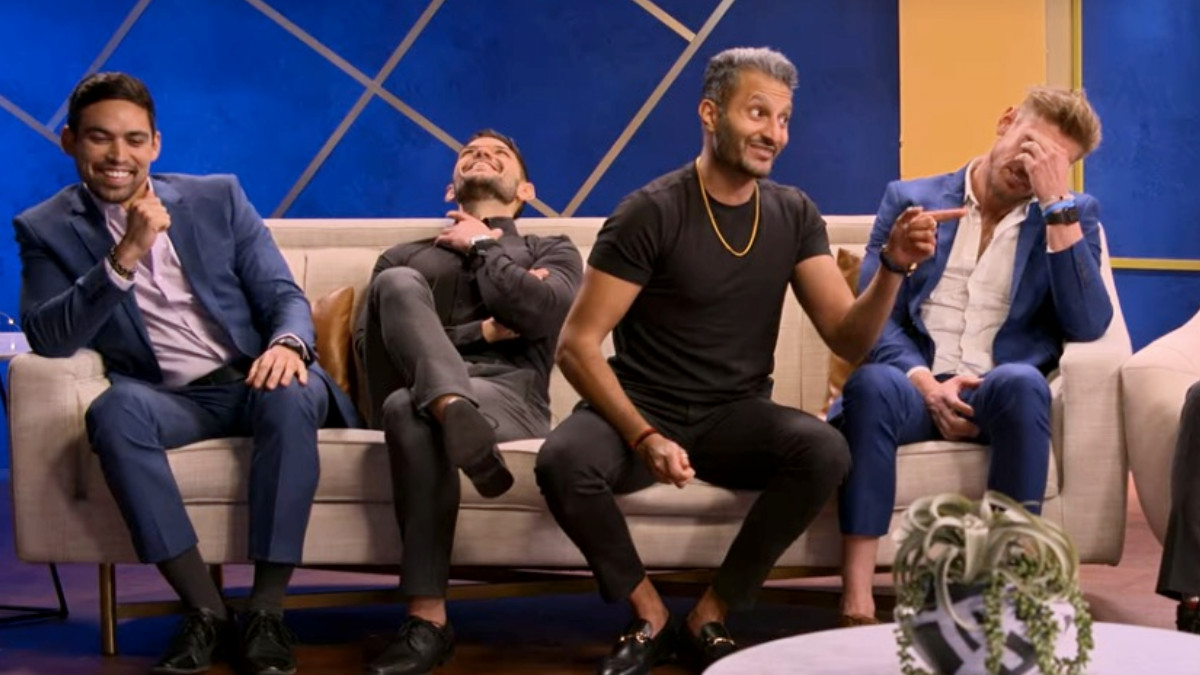 Warning: Major spoilers ahead for Love is Blind season 2 and its reunion special.

The second season of Netflix’s hit dating show Love is Blind wrapped last week, and of the six couples featured, only five made it to the altar, and of those five, only two ended up going through with it. In other words, there was a ton of drama to unpack, and the reunion special, released on Friday, more than delivered the goods.

But one cast member, in particular, who did not do himself any favors on the show, only proceeded to dig a deeper hole in the reunion.

Abhishek “Shake” Chatterjee quickly became the villain on the reality dating series for seemingly not understanding the point of the show, by asking the various women in the pods questions about their size, physical fitness, and whether they were small enough to pick up and put on his shoulders. Yet, incredibly, Chatterjee became engaged to a gorgeous Indian woman named Deepti Vempati, despite his apparent preference for leggy blondes.

Unfortunately, their engagement was doomed to fail after Shake repeatedly told just about anyone who would listen that he didn’t find himself attracted to Deepti. And thankfully, the 32-year-old information data analyst had the good sense to walk away from the altar.

So perhaps sensing that he was unliked going into the reunion, Shake came out with guns firing. Within a minute into the special, Chatterjee stated that he was nervous about how he was going to be edited, yet made no attempts to adjust his behavior accordingly. Throughout the first 30 minutes of the reunion, the 33-year-old veterinarian and house DJ repeatedly interrupted and talked over his fellow castmates, attempting to insert himself into drama where there was none.

“You came here for all the wrong reasons,” 32-year old Jarrette Jones told Shake at one point. “And you know that. Everybody can see how shallow you are.”

“Bro, we all have our preferences,” Shake responded, alluding to the type of women he typically goes for. “I won’t apologize for that.”

But when hosts Nick and Vanessa Lachey gave Shake a chance to defend himself, it did not … go well.

When asked by Lachey why, exactly, someone so evidently shallow would go on a show called Love is Blind, Chatterjee inexpiably compared getting married to making a “huge purchase,” to the shock of the others. Vanessa, in particular, seemed visibly disturbed by his remarks.

“Marriage, think of it as the ultimate purchase, then, if you will,” Shake started off, extremely questionably. “The ultimate commitment, if you will. Before you make this type of commitment, you have to read the fine print on that. So where we’re in a situation where the stakes are so big, I wanna make sure this thing works.”

“And for me, that meant I knew there was at least a certain physical body type to get me in the ballpark,” he continued perilously. “I’m not talking about she has to be five-two, this, this, this, this. I’m talking about I want this shit to work. If I were to marry somebody and, you know, there was a big weight discrepancy, it would be very hard for me to get past that.”

“I want this shit to work,” he repeated, adding a very Trumpian: “Nobody wanted it as bad as me.”

The entire time Shake was talking, the camera panned across the faces of his fellow podsters, who reacted with a mix of confusion, horror, amusement, and perhaps most of all, weariness. At one point, Deepti laughed and appeared to mouth, “Is this a joke?”

When Shake finally, blessedly, stopped talking, Vanessa pointed out matter-of-factly: “I think you were on the wrong show.” She added that there are plenty of reality dating shows based on looks, and that the point of Love is Blind is opening your heart to a bigger commitment.

“Because at the end of the day, what if she’s mangled in an accident? What if she gains weight? What if she loses her hair, legs, and her arms? Are you not gonna love her anymore?” Vanessa grilled him. “I hope to god if I’m mangled, knock on fucking wood, this man stands by my side. And I know he will, because he loves me for me.”

“So the problem I have, Shake, is that you sat there and berated every single one of these women physically, and then went through the process with this beautiful soul over here,” Vanessa continued. “All because you wanted someone to fuck. Not fall in love with.”

After some continued heated back and forth, Shake demonstrated why he’s the ultimate king of not understanding the assignment.

“We all have our physical preferences. Every woman here is beautiful. I think you’re all beautiful. I’m not attracted to all of you. Unfortunately, the only one I’m attracted to is Vanessa,” he said, of the woman who had literally just berated him for the previous five minutes.

At that point, we can safely assume that 32-year-old realtor Shayne Jansen spoke for everyone when he made this face.

At any rate, this certainly explains the behind-the-scenes feuding ahead of the reunion.

On a lighter note, however, later in the episode, Deepti was given a nice moment when 29-year-old construction worker Kyle Abrams — who had ultimately went for “freelance hair stylist” Shaina Hurley — admitted that he proposed to the wrong woman.

“The biggest regret is I should have asked Deepti to marry me. That’s what I learned the most. I fucked up,” said Kyle, gesturing towards the beaming Deepti. “I should have tried harder for you. I mean, I love her so much, she’s the best. And I wish I saw what was right in front of me. And I do — that’s why biggest regret. I’m sorry.”

Do we stan? Oh, you know we do. In the meantime, Shake has unfollowed nearly all of his season 2 castmates on Instagram, so it seems there is no love lost in either direction.