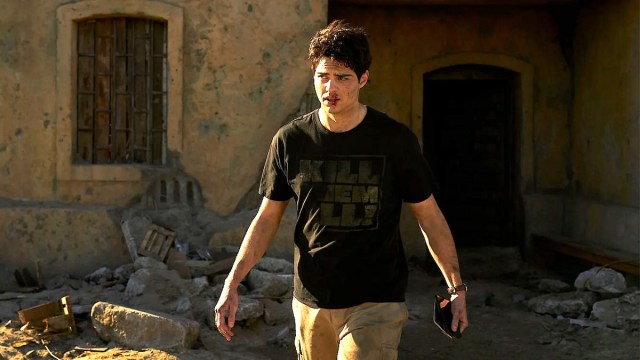 Netflix has shared the very first sneak peek at Noah Centineo’s lawyer-turned-spy Owen Hendricks in new series The Recruit. In the photos, the To All The Boys I’ve Loved Before actor can be seen bloodied in bruised as he navigates the world of the secret services’ underbelly.

At the Netflix Tudum convention, which took place Sept. 24, Centineo shared some insight on this new challenge as a member of the CIA. “My new show follows an unsuspecting lawyer as he’s pulled into a high stakes thrill ride through the world of international spy networks,” he said.

The actor skyrocketed to fame as teen heartthrob Peter Kavinsky in 2018’s To All The Boys I’ve Loved Before, and has mostly worked in the romance genre ever since. The Recruit is his first big step away from that trajectory as a leading man.

Centineo plays “a 24-year-old, fresh out of law school, who doesn’t even have time to figure out where the bathrooms are before he’s pulled into a high-stakes case,” as showrunner Hawley puts it. Hendricks must step right into action after a former asset of the CIA Max Meladze, played by Haddock, threatens to expose agency secrets if they don’t clear her name.

The executive producer says the show enters the world of espionage through a fresh perspective by centering its narrative around an operative who is just starting out.

The Recruit arrives to Netflix on Friday, Dec. 16.