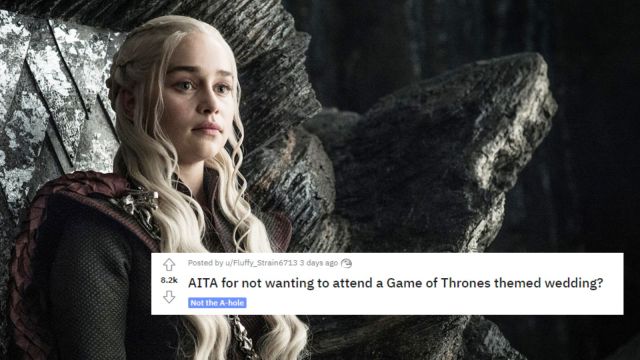 We all have that dream wedding, whether that may be the traditional one in a church or religious institution or a themed/destination one. However, there should be a line when it comes to weddings, at least to the point where it’s not too much of a hassle or an inconvenience to the guest. And that is the case for this Reddit user, who feels torn as to whether or not they’re the asshole for deciding that they no longer want to attend a Game of Thrones-themed wedding.

Reddit user u/Fluffy_Strain6713 shared their dilemma in r/AmITheAsshole, where they were invited to a Game of Thrones-themed destination wedding. According to OP, they were cool with dressing up and even traveling to the event. They also don’t mind their friend and fiancé being hardcore Game of Thrones fans.

The only thing that made them change their mind was the fact that the entire ceremony and reception was going to be spoken in High Valyrian (the fictional language from the show). Even the speeches and toast were expected to be in said language. They talked to their friend about it but the ‘future bride’ was upset for her changing her mind and gave her resources to learn a language OP is not interested in.

Luckily for OP, plenty of Game of Thrones fans who saw the post are on their side. Some joked about the idea of it being a wedding based on the hit fantasy show and how they expect to see a ‘red wedding’-type of situation, similar to the show.

Others agreed with OP and that they have the right to back out if they’re going to be forced to do something they’re not interested in. At the same time, they don’t think that ‘Lexi’ is a bad person either as themed weddings are quite common. They also suggested to OP that if they do go, they don’t have to say anything as they’re not obliged to do so.

Some also wondered if any of the other guests would be speaking High Valyrian, considering that learning a new language is difficult enough as it is. Let alone, a fictional one.

However, some started to poke holes in OP’s post as they didn’t believe that everyone was expected to speak the language. So they’ve begun to give ‘alternate solutions’ to help OP give a valid reason as to why they no longer want to attend the event.

Some were trying to figure out what makes High Valyrian different from learning Norwegian or another foreign language. Some Reddit users pointed out that what makes the two situations different is due to cross-cultures between the couples and their families. Hence why it makes sense why those languages would be acceptable. They also argued that you can use the language if you visit another country.

Learning a fictional language that not many people understand or wouldn’t use is completely different.

Most people thought OP is not the asshole and they have the right to decline and not attend the event. They can’t be forced to speak another language they’re not interested in. But what do you think? Does OP have legs to stand on when it comes to canceling their plans to attend their friend’s wedding? Or should they make a Duolingo account and start learning?