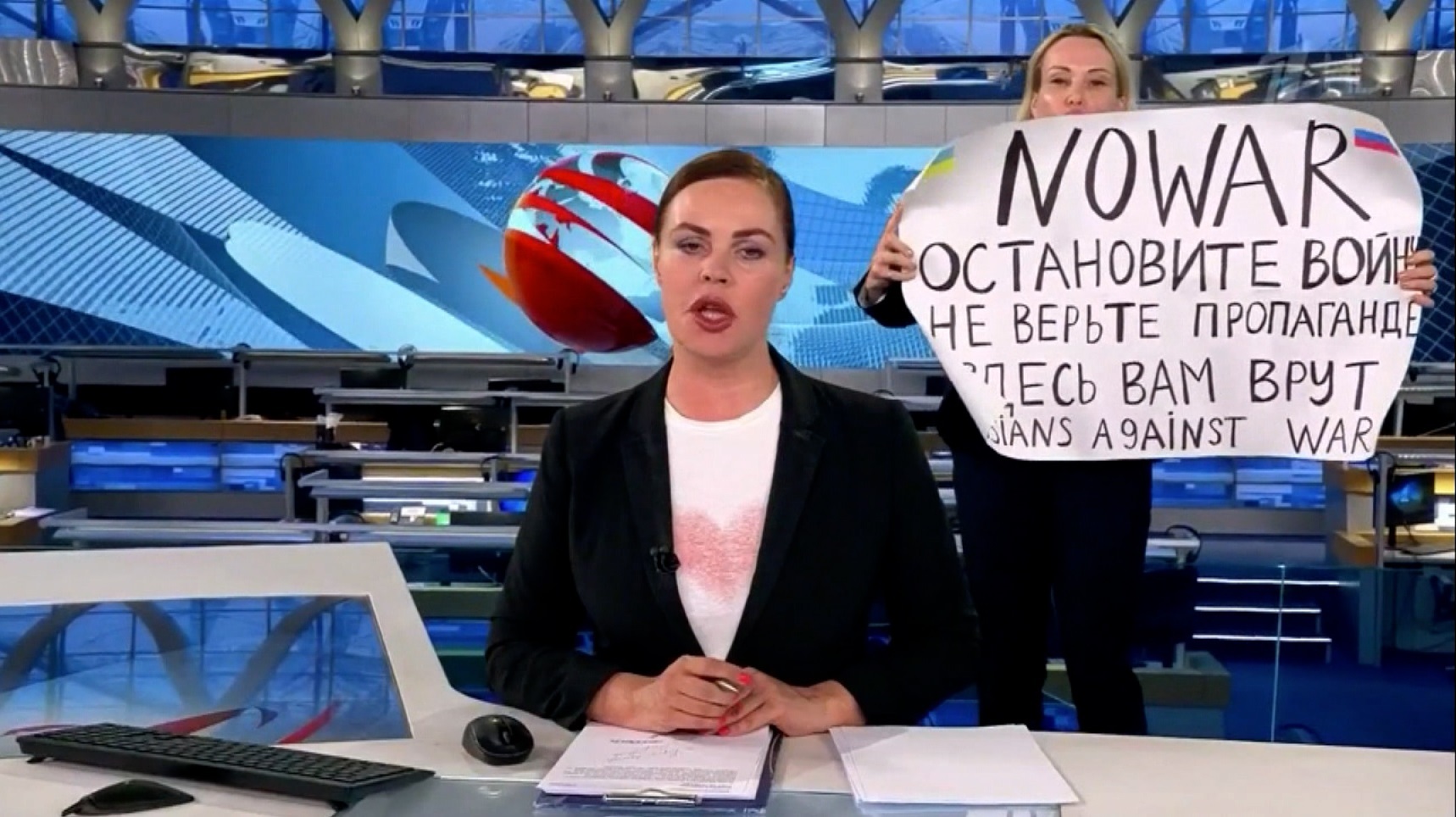 In a bid to protest against Russia’s ongoing invasion of Ukraine, a Russian journalist Marina Ovsyannikova interrupted the Channel One evening newscast to condemn the war.

The Russian journalist rushed in front of the cameras during the evening newscast, with a handmade sign which read:

“No war. Stop the war. Don’t believe the propaganda. Here they’re lying to you. Russians against war.”

As seen in the video below, Ovsyannikova continued to stay in the background thus prompting the news anchor to read louder before the evening news feed was replaced with pre-recorded footage.

Her protest was later posted on social media.

Ovsyannikova was later identified as an editor for the Russian-state broadcaster Channel One. Prior to her protest, she released a pre-recorded video stating that she’s ashamed for working for Channel One and spreading ‘Kremlin propaganda.’ In her message, she also called out Russia’s president Vladimir Putin for the “aggression” taking place in Ukraine and requested fellow Russians to stand up and protest against the government.

“What is going on in Ukraine right now is a crime. And Russia is the aggressor. The responsibility for this aggression lies only on one person and that person is Vladimir Putin… Unfortunately, I have been working at Channel One during recent years, working on Kremlin propaganda. And now I am very ashamed. I am ashamed that I’ve allowed the lies to be said on the TV screens. I am ashamed that I let the Russian people be zombified.

We were silent in 2014 when it all started. We did not take to the streets when the Kremlin poisoned Navalny. We just silently watched this anti-human regime. And now the whole world has turned its back on us. The next 10 generations of our descendants won’t be able to wash away the shame of this fratricidal war. We Russians are thinking and intelligent people. It’s in our power alone to stop all this madness. Join the protests. Don’t be afraid. They can’t arrest us all.”

Russian news agency Tass has reported that Ovsyannikova has been detained and the incident is currently being investigated. Ovsyannikova may face 15 years behind bars according to a new Russian law as the country cracks down on anti-war protestors. So far, more than 14,000 people have been arrested, including elders and children.