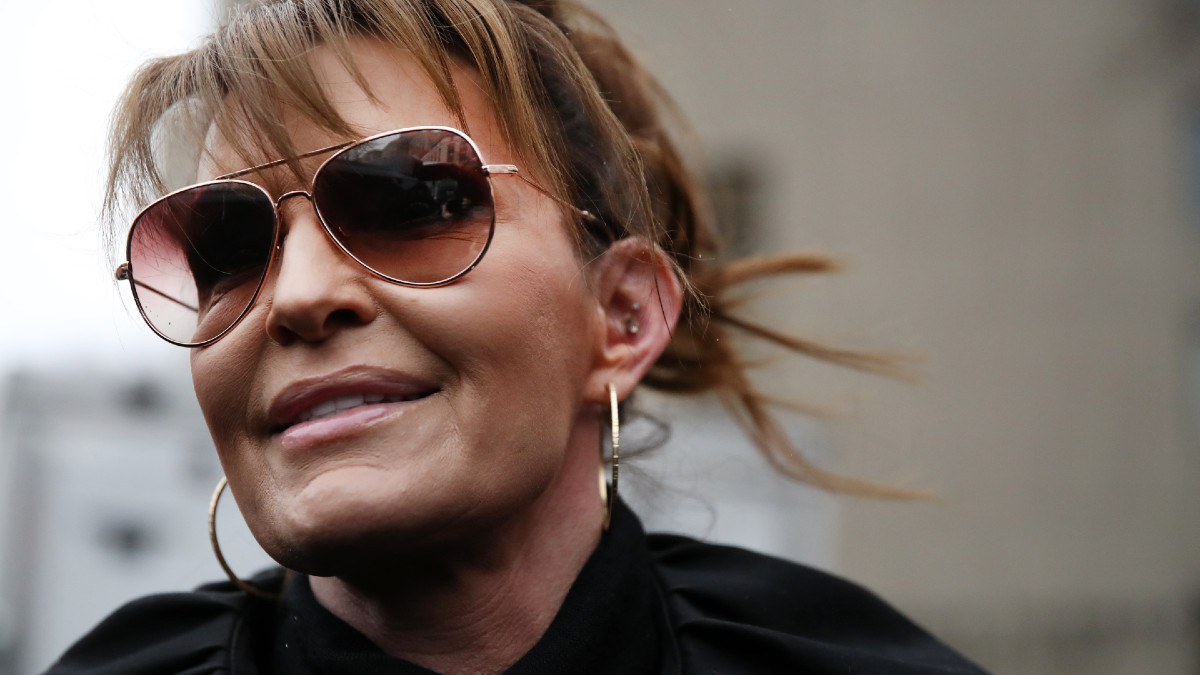 Sarah Palin has been in New York City over the past few weeks, where a federal court heard her libel case against the New York Times over a 2017 editorial which she claimed damaged her career as a conservative political commentator. The case was eventually dismissed, and to add insult to injury, an unfortunate photo of Palin outside the Manhattan courthouse where the trial was held has gone viral.

Now, we will concede that making fun of someone’s looks isn’t nice. But in the case of the 2008 candidate for vice president, maybe it’s okay to make an exception just this once. After all, it’s not a stretch to connect the rise of Palin and her folksy brand of defiant ignorance directly to the current state of the Republican party — and the United States, by proxy — which is currently being held hostage by a former reality TV president and congresspeople like Marjorie Taylor Greene, who make Palin look nearly hinged in comparison.

Wearing a black coat that looked like something straight out of Gargamel’s closet and large tinted shades, Palin was looking more haggard than usual — blame the stress of the trial, the lighting on that particular February day, and so on. As such, people on Twitter began comparing the 58-year-old to four-time Academy Award nominated actor Willem Dafoe.

“Sarah Palin’s transformation into Willem Dafoe is almost complete,” wrote the Twitter account for The USA Singers, along with the photo in question.

Another user suggested that Willem Dafoe should sue Sarah Palin for defamation. “Willem Dafoe is looking funky these days,” tweeted an antifa account.

Another user claimed that the comparison was unfair, sharing a side-by-side photo of Dafoe’s Boondock Saints character dressed in drag, and stating that “he wore it better.”

But Dafoe isn’t the only comparison being made. “Imma tell my grandkids this was Steven Tyler,” tweeted the Liam Nissan parody account, with the same image.

“Give Steven Tyler a break,” wrote yet another user, making an even less flattering comparison to the puppet from the classic “Wayland Flowers and Madame” comedy routine.

Ouch. That one has got to sting even more than her maligned lawsuit. On Tuesday, all of nine members of the jury reached a unanimous verdict in favor of The New York Times, despite having no prior knowledge that the judge had planned to dismiss the case regardless of their verdict.