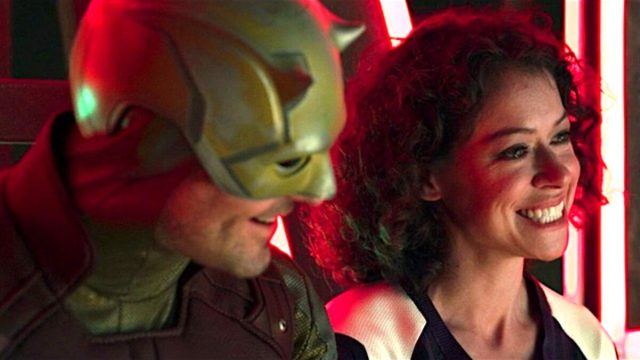 Fans were ecstatic to see the return of Charlie Cox’s Daredevil to the MCU in the She-Hulk: Attorney at Law series. The inclusion of the character had fans worried prior to his debut but most seem to be happy with the usually gruff characters’ chance to have a little fun, wink wink, in the more light-hearted series. Now, She-Hulk‘s director wants to see a little more of the adorable pairing in Daredevil’s upcoming Disney/Marvel solo series, Daredevil: Born Again.

Matt Murdock made his appearance in episode eight, apologizing for arriving late (to both the on-screen judge and the fans who sat at home who had been waiting for him all season) and then proceeding to have the most adorable chemistry with Jennifer Walters. The pair were able to discuss both aspects of their lives thanks to their unique position of being both lawyers and superheroes which brought them close together, very close indeed.

To fans’ surprise, we saw Matt once more when She-Hulk forced the writers to bring him back for her own gratification, taking him along to a family barbecue in one of the most normcore scenes we have ever seen the tortured superhero vigilante ever endure. The two seem to be in a relationship of sorts, but will this last going into Daredevil: Born Again? She-Hulk director, Kat Coiro, certainly hopes so, or at least is looking forward to the series repaying the favor by having a She-Hulk cameo.

Speaking to ComicBook the director said, “I loved She-Hulk and Daredevil’s chemistry. Daredevil has his own show and I think those legal worlds are definitely going to collide.” It may be that perhaps the show finds a way to include Jen on a legal matter, one that requires a little brute strength. The Daredevil: Born Again series will definitely have a very different feel to She-Hulk, but if he can enter her world then surely she can enter his, it’s not as if Tatiana Maslany can’t do gritty and dark, hello Orphan Black.

Coiro hopes to see more of She-Hulk and sees scope for the character to grow within the MCU, “I love the idea of Nikki and Pug and Jen having their own law firm. I love the idea of her going to space. You know, now where she’s got a relative who’s got family out there. So I think the possibilities are endless and I think only Kevin (Feige) knows.”

That last statement is one of the fundamental truths of the MCU, as it stands only Kevin Feige, the man not the AI machine, understands the plan for the studio and its characters moving forward. Perhaps we will see a slightly grittier She-Hulk rekindling her relationship with Daredevil down the line, but at this stage, who knows?