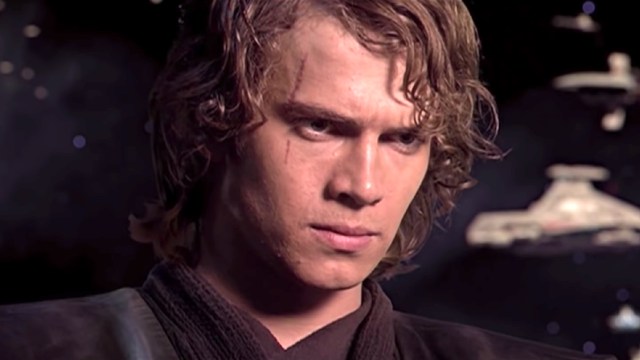 Much is often said about how the filmmaker had a long-term vision in place for the sci-fi saga. Some key things were devised on the fly, like Darth Vader being Luke’s father, but in other ways, it’s absolutely true. And this fascinating breakdown of Anakin’s origins makes clear that Lucas mapped out the Prequel Trilogy long before he made it.

The Star Wars Archives: 1995-2005 features a transcription of information that the creator shared about Anakin’s backstory during a conference meeting for Return of the Jedi in 1981, at which director Richard Marquand, producer Howard Kazanjian and writer Lawrence Kasdan were present. And while there, Lucas explained to his colleagues how he planned to eventually bring the origins of Vader to life, as you can see below.

“Anakin Skywalker began hanging out with the Emperor, who at that point nobody knew was that bad, because he was an elected official. He was a politician. Richard M. Nixon was his name. He subverted the senate and finally took over and he was really evil. But he pretended to be a really nice guy. Luke’s father gets subverted by the Emperor. He gets a little weird at home and his wife begins to figure out that things are going wrong and she confides in Ben, who is his mentor.

On his missions through the galaxies, Anakin has been going off and doing his Jedi thing and a lot of Jedi have been getting killed – and it’s because they turn their back on him and he cuts them down. The President is turning into the Emperor and Luke’s mother suspects that something has happened to her husband. She is pregnant. Anakin gets worse and worse, and finally Ben has to fight him and he throws him down into a volcano and Vader is all beat up.

When he falls into the pit there is hardly anything left of him by the time the Emperor’s troops fish him out of the drink. Then when Ben finds out that Vader has been fished out and is in the hands of the Empire, he is worried. He goes back to Vader’s wife and explains that Anakin is the bad guy, the one killing all the Jedi.

Mrs. Skywalker has had the kids, the twins, two little babies who are six months old or so. The Skywalker line is very strong with the Force, so Ben says, “I think we should protect the kids, because they may be able to to help us right the wrong that your husband has created in the universe.” Ben takes one and gives him to a couple out there on Tatooine and he gets his little hideout in the hills and he watches him grow. Ben can’t raise Luke himself because he’s a wanted man. Leia and Luke’s mother go to Alderaan and are taken by the king there, who is a friend of Ben’s. She dies shortly thereafter and Leia is brought up by her foster parents. She knows that her real mother died.

I think you can make Ben take the blame for Vader. “I should have given him more training. I should have sent him to Yoda, but I thought I could be as good a teacher as Yoda. I wish that I could stop the pestilence that I’ve unleashed on the galaxy.” His burden is that he feels responsible for everything that Vader has done.”

It’s startling how similar this breakdown is to how things unfolded in the prequels, which Lucas didn’t end up making until the late 1990s/2000s. The Emperor’s manipulation of Anakin is present and correct, as is the political satire that comes with Palpatine’s rise to power, not to mention Obi-Wan Kenobi’s status as Anakin’s mentor and Luke and Leia being twins.

The biggest difference, of course, is that Padme Amidala – not named in Lucas’ description – ended up dying in childbirth in Revenge of the Sith. At this point, the filmmaker imagined her living on for at least a few months after her children’s birth, watching over Leia on Alderaan. This somewhat explains the line in Returns where Leia mentions vaguely remembering her mother, which has always bugged fans.

Though the quality of the prequels will forever be debated by Star Wars lovers, you have to hand it to George Lucas, as he always knew what story he wanted to tell with them.