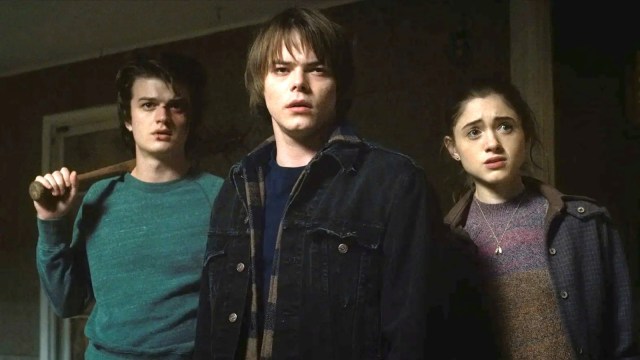 At the time of filming Stranger Things, young adult actors Natalia Dyer, Charlie Heaton and Joe Keery were 21, 22 and 23, respectively. Despite Dyer’s Nancy Wheeler and Heaton’s Jonathan Byers both being 16 and Keery’s Steve Harrington being 17 in the series, the triple-threat needed to pass as minors.

Now, Dyer is 27-in comparison to Nancy Wheeler being 18/19 give or take; Heaton is 28 and also playing an 18/19-year-old and Keery is 30, attempting to pass as 10 years younger. Unfortunately, genetic makeup isn’t on their sides, because they definitely don’t look the part to play late teens. Along with Dacre Montgomery’s Billy Hargrove and Joe Quinn’s Eddie Munson, Stranger Things Reddit are debating which actors could potentially pass the teen test.

So, what exactly was the verdict from our dedicated Reddit fans? Well, the majority agree that Dyer, Heaton and Keery performed exceptionally well as Nancy, Jonathan and Steve, especially during the first season — where the characters are at their youngest. However, it appears that Billy wasn’t as convincing as the rest, especially given his jacked physique and forward advances toward promiscuous older women like Mrs. Wheeler.

Another perspective feels that Dyer’s Nancy Wheeler is the youngest-looking out of the teens, but as the series progresses, some makeup and wardrobe changes make her look much older than she is. Again, whether this was intentional or not, who knows?

As for Jonathan, he has been named “the oldest-looking young person” that some Redditors have ever seen. Arguably, he does look like a 40-year-old man from certain angles, but maybe the Stranger Things crew didn’t give him the most flattering lighting. Plus, Heaton spent a lot of scenes with Noah Schnapp, who looked incredibly young by comparison and might have aged him even more.

Although she wasn’t included in the original post, Maya Hawke’s Robin Buckley has been named as an early-twenties actress who could pass as a senior year high school student. The daughter of Uma Thurman and Ethan Hawke is only 23-years-old in real life, whereas Robin was around 18-years-old in Stranger Things 3, making her around 19/20 as of Stranger Things 4. Hawke is actually the closest in age to her character out of all the twenties actors.

Ironically, despite Joe Keery being 30, his name has been tossed around as well, mostly due to Keery possessing a “baby face” that makes him look younger than he really is. There isn’t really a clear winner in this debate, but it seems like Joe Keery, Maya Hawke and Natalia Dyer are the victors — if there even is any victors.

After the exciting cliffhanger reveal of Volume One with Jamie Campbell Bower’s 001 as Vecna, Stranger Things fans are on the edge of their seats, awaiting Volume Two when it drops on July 1. Netflix, if Steve, Nancy or Eddie die, we’re sharpening our pitchforks and torches and coming for you.