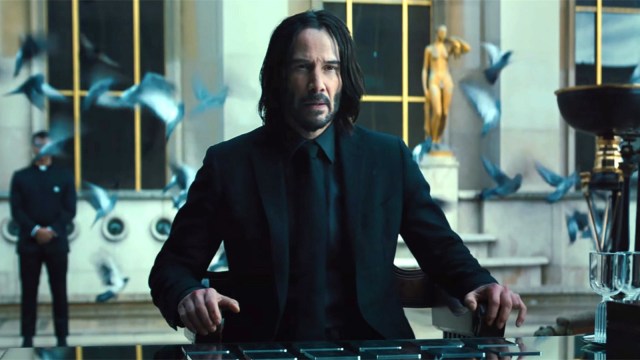 It is yet again coming down the wire for John Wick. A bit of viral marketing featuring an hourglass dropped today in what seems to be a countdown to something on the horizon for the fourth installment in the wildly successful Keanu Reeves-helmed action franchise.

Both Collider and the movie’s official Twitter accounts have posted links to a Twitter Broadcast countdown site as well as a phone number that allows whoever signs up to join a text service that allows them to become an “esteemed member” of the John Wick online community and receive a “classified John Wick: Chapter 4 update” when “the sand runs out” according to the texts.

While the marketing attempt could be any of several things, the best money is on it being an early look at the film’s first trailer. Lionsgate released a “sneak peek” several months ago but the film has yet to receive an official trailer although some online sources are predicting that one should drop tomorrow.

According to Collider, the film’s synopsis states: “John Wick (Keanu Reeves) takes on his most lethal adversaries yet in the upcoming fourth installment of the series. With the price on his head ever increasing, Wick takes his fight against the High Table global as he seeks out the most powerful players in the underworld, from New York to Paris to Osaka to Berlin.”

The fourth chapter of the action series was originally scheduled to be released in May of 2021 but has been subjected to multiple delays caused by COVID concerns. The film was further delayed to avoid opening against Top Gun: Maverick.