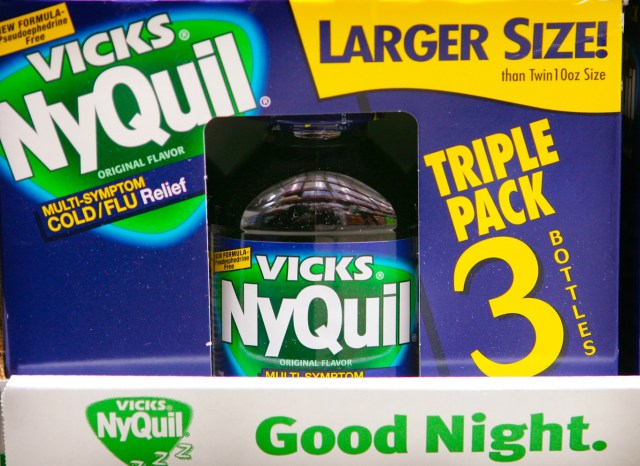 How do you know when a TikTok trend is getting out of hand? When the government has to get involved. Case in point: the Food and Drug (FDA) administration was recently forced to remind people that boiling NyQuil to cook chicken is a bad idea.

It all started with a challenge on the social media site to saute chicken breast in the sleeping medication, and while most people think it’s a joke that doesn’t mean someone isn’t dumb enough to try it. Here’s what the FDA said:

“The challenge sounds silly and unappetizing — and it is. But it could also be very unsafe. Boiling a medication can make it much more concentrated and change its properties in other ways. Even if you don’t eat the chicken, inhaling the medication’s vapors while cooking could cause high levels of the drugs to enter your body. It could also hurt your lungs.”

CNN also picked up on the warnings and put Dr. Tara Narula on air to talk about its dangers.

“It’s hard to believe that this is even a thing. I think parents need to understand that this is going on first and foremost. They need to keep their medicines, whether it’s over the counter or prescription, out of reach and locked from kids in the home.”

This is by no means the first time kids made the news for doing dumb things. There was a whole thing about millenials eating Tide Pods for fun, although was anyone actually doing it? Hard to say. The FDA also warned about an earlier TikTok challenge that told people to ingest a lot of the allergy medicine diphenhydramine until they hallucinated.

The FDA said it felt the need to issue the warning because of “news reports of teenagers needing to go to the emergency room or, in some cases, dying after participating in this challenge and taking too much medication.”

So what do you do to protect your kids? Keep drugs away from them first of all. The FDA says locking them up is also a good course of action.

“Sit down with your children and discuss the dangers of misusing drugs and how social media trends can lead to real, sometimes irreversible, damage. Remind your children that overdoses can occur with OTC drugs as well as with prescription drugs.”

The FDA also said if you have a question about a medication “call your healthcare provider or pharmacist or the FDA.” The FDA’s Division of Drug Information (DDI) exists to answer questions about prescriptions as well as over the counter drugs.