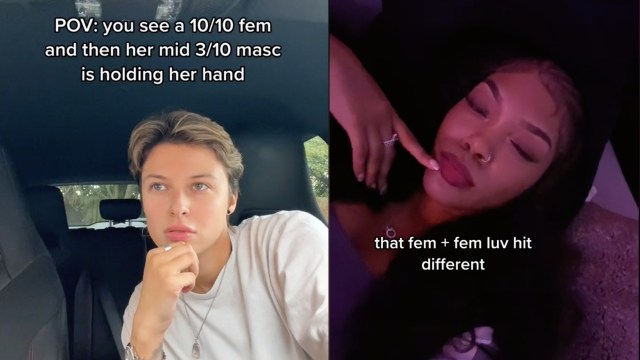 A new TikTok trend is sparking controversy across the app, and it’s not hard to see why.

TikTok gives visibility to a huge number of oft-neglected groups, elevating conversations to the forefront and, in many cases, creating a more accepting environment. LGBTQIA people find plenty of cozy niches on the app, where they can find like-minded folks to follow and enjoy. It’s a haven of sorts for plenty of people, but TikTok can also have a hugely negative impact.

Take the Depp vs Heard trial in April. While opinions on the trial remain split online, a huge amount of support for Johnny Depp erupted on TikTok during the trial’s run. In tandem with Depp-positive material, a slew of anti-Heard content arrived on TikTok “for you” pages, and quickly turned TikTok’s opinion against the Aquaman star.

In a far-removed, but similarly negative, recent TikTok trend, support for a problematic opinion has been on the rise. The trend promotes the general opinion that fem lesbians are superior to butch lesbians via a range of videos. Many of these appear to lean into the exceedingly tired idea that feminine women are more attractive — and thus have more worth — than less-feminine women, and quickly sparked backlash among lesbian creators.

In the most watered-down, straightforward way, lesbians are largely viewed as belonging to one of two camps. It is important to remember that far from all lesbians consider themselves along these lines, but in an age where people sometimes claim that using pronouns is a challenge, it is sometimes simpler to identify oneself within clear-cut bounds. Thus, a perception has arisen that all lesbians are either butch/masc or fem. Butch or masc lesbians are typically characterized by their more masculine choice of attire and short haircuts, as well as more muscular frames. Fem lesbians are essentially the opposite, sporting long hair, plenty of makeup, and a generally conventionally feminine appearance.

In the real world, very few women find themselves fitting tidily in either camp, but that’s not the concern of the internet. Instead, a portion of TikTok is busy leaning into the extremely outdated opinion that fem lesbians are superior to their masc counterparts. Videos praising fem lesbians and generally putting down mascs have been on the rise in recent weeks, and criticism of this damaging trend is just starting to take off in response.

Lesbians — masc, fem, and everything in between — have been taking to social media to criticize the new “fem love” trend on TikTok. Several posts to Twitter take aim at the same video, posted to user @Saskia Jesson’s account. The video simply sees the creator smoldering out her car window, accompanied by the caption “POV: you see a 10/10 fem and then her 3/10 masc is holding her hand.” The video appears to put far more worth on the fem half of the relationship, and in the process puts down her masc partner.

Responses to the TikTok are also included in the majority of critical tweets, a necessary addition that helps to display how much support @Sasika Jesson’s viewpoint has. Numerous commenters support the idea that “fem for fem” relationships are superior to fem/masc or masc/masc relationships, and people on Twitter are not amused. Praising or complimenting someone is one thing, but is it really necessary to put someone else down in the process?

Twitter user @herbertmidwest joined several other viewers in vocally criticizing the video, noting in a tweet that this insistence on “repeating the feminist wave of the 70s and hating butches and masc is nothing more than misogyny and homophobia.” A number of other users followed in suit, adding notes that TikTok is promoting “a weird corruption of feminism” in its contempt for women who don’t fit a predetermined and outdated ideal of femininity.

The trend reaches much farther than a single video, but @Sasika Jesson’s upload provides an excellent example of this concerning trend. A search through lesbian TikTok makes it clear that fem is on the rise, with a huge number of videos throwing their support behind fem/fem relationships. While not all of these videos make a mockery of the masc half of the restrictive lesbian categorization system, their celebration of supposed femininity as superior rings clear. User @devilast perhaps put it best, writing “bro y’all from the same team, why you degrading?”

The trend isn’t likely to set lesbians back a huge amount, but the people pointing out its problematic nature are not wrong. These types of videos are nowhere near as damaging as Andrew Tate’s viewpoints, for example, but they do lean on similarly sexist origins, whether or not they realize it. The entire motivation behind the trend appears to be rooted in poorly-concealed sexism and low-key homophobia, albeit sexism and homophobia that the majority of creators don’t even realize they’re taking part in.