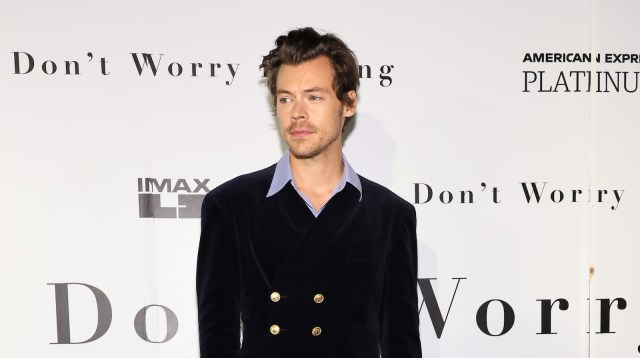 My Policeman director and some of the film’s stars sat down for an interview on Wednesday with E! News to discuss the upcoming film and what they thought of co-star Harry Styles.

The movie is set to be released in theaters this Friday, Oct. 21, and will also be available on Nov 4 on Amazon Prime Video.

Styles plays the titular role, a policeman named Tom who ends up being a part of a love triangle in 1950s England involving him beginning a romance with a man named Patrick during a time when homophobia was prominent in society and homosexuality was illegal in the UK.

The movie is based on the book of the same name by Bethan Roberts, who ran down the street swearing out of extreme jubilance when she got the news that Styles was cast as Tom.

Director of the film, Michael Grandage explained Harry’s role by saying, “He understood how Tom doesn’t want to give anything away about himself because he’s a policeman at a time where the law is against him. So those two component factors made him shy, made him insular.”

Grandage praised Styles’ ability to understand the character, adding, “That’s a very difficult thing to play. So Harry knew that playing his card close to the chest is gonna be quite a difficult acting challenge and that everybody else places something on Tom. That’s the way the story works and that’s why he was right for the part.”

Grandage also praised the scriptwriter, Ron Nyswaner, as he explained how he felt when he first read the script. “It’s very rare you read a script straight through and know the moment you close it that you want to do it….and that happened with this.”

David Dawson, who plays the younger Patrick in the film, explained that Grandage had him, Emma Corrin, and Styles get to know each other for three weeks prior to filming in order to create some real chemistry. Dawson further explained, “Moving forward, Harry and I promised that we would continue to check in with each other throughout this process, which I greatly appreciated.”

Gina McKee, who stars as Marion, summed up what they all thought of Harry himself, saying, “Harry is an amazing person.”

As for the movie itself, it has only a 44% approval score on Rotten Tomatoes based on 52 critic reviews.

Michael Grandage gave the best explanation of the meaning of the film, saying, “If a lot of young people can engage with this film then they will see a time that existed in my lifetime when the law meant that you weren’t even allowed to be yourself. I hope they will become advocates for why we need to continue to move forward, not backward.