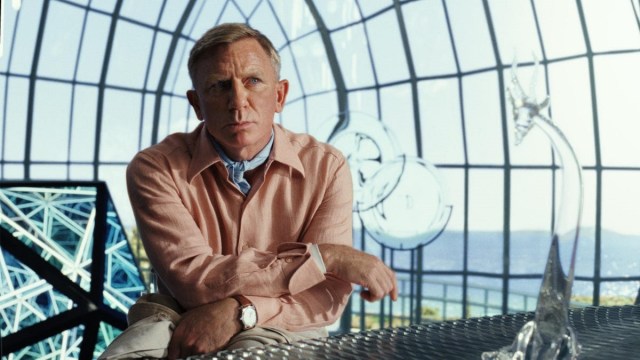 via Netflix
Review of: Glass Onion: A Knives Out Mystery

With 'Glass Onion,' Johnson and Craig have created a sequel that not only earns its keep, but promises that any subsequent installments in the franchise will deliver both reinvention and all the comfort and intrigue of the classic whodunit that filmmakers come back to time and time again for a reason.

Glass Onion: A Knives Out Mystery, the sequel to Rian Johnson’s 2019 whodunit, reunites audiences with the detective Benoit Blanc (Daniel Craig) for a delightful ride that makes the case for the franchise’s staying power.

The southern detective who found himself on the east coast is having a rough time with the pandemic when we first see him languishing in the bath, hoping for something, anything to pique his interest. It’s clear that Blanc gained a certain level of acclaim since we last saw him, but he’s desperate for a mystery challenging enough to keep him occupied, as he tells his video chat support group for bored geniuses that provides some truly legendary cameos. Somehow, Blanc is a world-famous detective who does not have a podcast.

As if dropped from heaven itself, a curious box appears at his doorstep to lead him to his next adventure that can only be opened by a series of puzzles (or a hammer if that’s more your speed), like Hellraiser minus the gore. He’s not the only person to receive one, though. One by one, we meet the main players who first have to figure out how to open the damn thing in their own homes, and we find this seemingly ragtag crew has deep roots.

Claire (Kathyn Hahn) is a politician publicly presenting herself as a diehard environmentalist and privately just interested in power. Kate Hudson does her best work in years as Birdie, a model turned fashion editor turned public pariah turned sweatpant entrepreneur. It’s a thrill to see Hudson show off her comedic chops and be willing to poke fun at herself as the founder of an athleisure brand called Fabletics. Duke (David Bautista) is YouTube famous for men’s rights advocacy and is joined by his girlfriend, a Taurus named Whiskey played by Madelyn Cline, who holds her own in a cast of heavy-hitters. Leslie Odom Jr. plays a scientist named Lionel, while Andi (Janelle Monáe) is estranged from the group, but shows up anyway and connects with Blanc.

Together, they refer to themselves as The Disruptors, which you should see as the red flag that it is. Inside, there’s an invite for their annual trip to solve a pretend mystery together, but this time around, it’s not so pretend. Miles (Edward Norton) is an ungodly mix of Jack Johnson and Elon Musk, and he hosts the crew on his private island in Greece where his hospitality includes all hard kombucha from Jared Leto’s brand you can drink. No one, Blanc most of all, seems quite sure why he’s there, but it’s clear he’s an icon to the group of amateur detectives.

We learn that the cadre of old friends is now bound together by their respective cancellations. “It was a tribute to Beyoncé,” says Birdie more than once. But they’re also each kept afloat in some way by tech giant Miles’ billions, and this group of alphas doesn’t do well with the power imbalance. “Disruptors recognize each other,” says Miles, but the camaraderie has its limits and as the story twists, it’s clear that betrayal is nothing new in this crowd.

The movie is joke-dense in a way that tricks you into thinking a line is just in there for a laugh, but of course, they’re all clues. The sequel is lighter and funnier than the original, which occasionally felt a bit heavy-handed while pitting the haves vs. the have-nots. Glass Onion doesn’t stray from the class commentary (as one would hope a movie taking place primarily on a billionaire’s private island would), but is more successful in getting the message across without veering towards the preachy.

In addition to Hudson’s fantastic performance, Monáe deserves props as the heart of the movie, giving a sly, understated performance that will keep you guessing. It’s not an easy tightrope to walk, but she pulls it off. As the loner of the group, she’s the only one in the group of affluent narcissists who remembers that actions have consequences. Craig, meanwhile, soaks up the sun in linen as a charming observer. Although he’s a lighthouse for the audience, the movie is truly an ensemble effort and is treated as such, with each key player given the opportunity to show audiences their ugliest selves.

With Glass Onion, Johnson and Craig have created a sequel that not only earns its keep but promises that subsequent installments in the franchise will deliver both reinvention and all the comfort and intrigue of the classic whodunit that filmmakers come back to time and time again for a reason. It’s pure fun, and it’s clear Johnson reveres the genre enough to cleverly break the rules.

Glass Onion: A Knives Out Mystery

With 'Glass Onion,' Johnson and Craig have created a sequel that not only earns its keep, but promises that any subsequent installments in the franchise will deliver both reinvention and all the comfort and intrigue of the classic whodunit that filmmakers come back to time and time again for a reason.