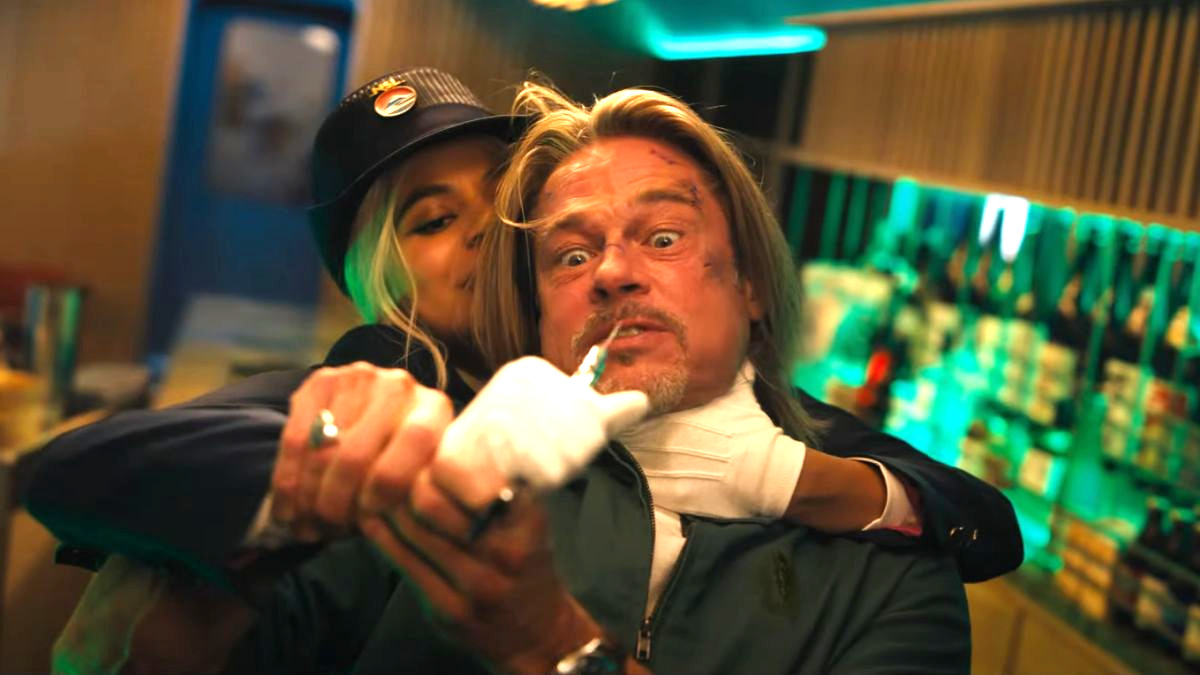 via Sony
Review of: Review: 'Bullet Train' is all over the place, but that's kind of the point

Stuntman-turned-filmmaker David Leitch’s entire career feels as though it’s been leading up to Bullet Train, with the precision-engineered stunt choreography of John Wick and Atomic Blonde being bolted onto the absurd heightened humor of Deadpool 2 and the ludicrous blockbuster sheen of Hobbs & Shaw. It’s a very messy movie, but in an era where big budget studio-backed summer flicks are increasingly uniform and homogenized, that’s intended to be a compliment.

No stylistic stone is left unturned, then, and while the 126-minute length is a touch on the excessive side, you can’t help but admire the giddy delight and gleeful enthusiasm on display from Leitch and his cast, which elevates a nonsensically-plotted and largely superficial story firmly into the territory of big, dumb fun. Make no mistake about it; Bullet Train is all style and no substance, but sometimes that’s all people want (and/or need) to be entertained.

The plot is set into motion through exposition, with Brad Pitt’s laid-back assassin Ladybug tasked with a seemingly simple job to retrieve a mysterious briefcase from the titular mode of transport. Naturally, everything that could go wrong does go wrong, but it’s impossible to predict from scene to scene how and why it’s going to happen, such is the scattershot nature of virtually everything that unfolds after the doors close.

Once on board, it doesn’t take long for Ladybug to realize he’s not the only contract killer on the train, and every single one of them has a personal stake in either retrieving the briefcase, or tracking down the unseen mastermind who somehow managed to dupe them all into looking for the same MacGuffin in the same place at the same time.

There’s Cockney “twins” Tangerine and Lemon, played by scene-stealing MVP Aaron Taylor-Johnson and a questionably-accented Brian Tyree Henry, the latter of whom turns his lifelong love of Thomas the Tank Engine into Bullet Train‘s single and most notable recurring thematic motif, just to give you an idea of what we’re dealing with here.

Andrew Koji (once again being criminally underutilized by an action-heavy production) is looking for the person responsible for putting his son in hospital, while Joey King’s unassuming Prince (ironic given she recently headlined The Princess) has ulterior motives of her own, and it doesn’t take long for everyone to figure out she’s not the shy, unassuming schoolgirl she’s passing herself off as.

Pitt brings the right amount of aloof charm to the central role, tying things together the best he can as the central figure in a story that comes perilously close to going off the rails on numerous occasions, while it’s refreshing to see him back in action hero mode for the first time in what feels like forever, and he acquits himself very well on that front, too.

There are flashbacks, flash-forwards, non-sequiturs, splash panels, information dumps, cameo appearances, blood geysers, swords, knives, guns, and plenty more besides, but Bullet Train has no intention whatsoever of fleshing out any of its main characters beyond Ladybug. Even then, his shades are filled in by therapist-approved soundbites and telephone interactions with Sandra Bullock’s handler.

Nobody gets a real name, but they do get helpful introductory montages that establish who they are and how they factor into the plot. The script from Zak Olkewicz bends over backwards while simultaneously tying itself in knots to try and make sense of how the aforementioned Ladybug, Tangerine, Lemon, and Prince factor into the story, but we haven’t even mentioned Bad Bunny’s Wolf, Zazie Beetz’s Hornet, Logan Lerman’s Son, two A-list celebrity guests as Pitt’s rival hitter Carver and a comic relief train passenger, or even Hiroyuki Sanada’s wizened sage Elder and Michael Shannon’s grizzled Russian samurai White Death, who end up interlocking a narrative that covers decades of convoluted storytelling that ultimately brings us to the final act.

The set pieces are as crisp and clean as you’d expect from the 87North team, while the CGI ranges from unconvincing to inconsistent. The fight scenes are lean, mean, efficient, and brutal, while the dialogue is largely one-note. Many cast members make an impression as idiosyncratic and eccentric assassins, but others are reduced to platitudes or given too little screentime to make a mark. The completely fitting essence of Bullet Train is that it moves at such a relentlessly rapid speed without letting up, that plenty of innocent bystanders like a cohesive screenplay, three-dimensional characters, and any sense of structure or pacing are left behind on the platform.

The influences on display range from Leitch’s own back catalogue to Quentin Tarantino’s Kill Bill Vol. I via early Guy Ritchie crime capers and even Looney Tunes cartoons, and when Bullet Train sings it’s often a blackly hilarious and knowingly absurd slice of demented action goodness. When it doesn’t work, self-indulgence begins to creep in, almost as if the creative team deliberately set out to make something that would be fondly remembered as a cult favorite in the years to come, but that’s a sentiment that can only be earned, not cultivated.

That’s Bullet Train in a nutshell; there’s always too much going on, and not all of it lands as intended, but it’s hard to be mad when Leitch has decided that he’s going to give a bottle of Fiji water and a venomous snake a backstory. It’s completely unnecessary and it adds absolutely nothing to the movie as a whole, but the director is having his cake and eating it, too, so the best thing to do is turn your brain firmly to its “off” setting, sit back, and go along for a ride that makes next to no sense if you think about too hard, but delivers plenty of bang for its buck at every turn.

Review: 'Bullet Train' is all over the place, but that's kind of the point