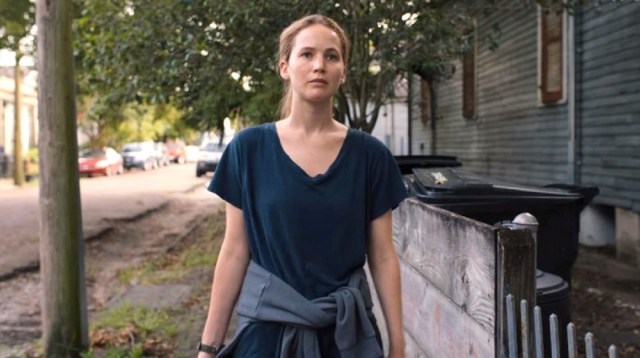 Understated but no less powerful for it, Causeway will remind audience what Oscar winning actors can do.

Disability in cinema often comes with an Oscar promise attached, as actors automatically jockey for recognition of their work. Rarely is that performance stripped back to its bare bones to reveal the person beneath dealing quietly with their struggle instead of on a cinematic soapbox. Thankfully, Lila Neugebauer’s Causeway achieves just that aided in no small measure by Jennifer Lawrence on solid form.

Pictured in close-up as a car sits out of focus, Neugebauer introduces the audience to Lynsey (Jennifer Lawrence) in silence. Detached, disorientated, and withdrawn – it is a low-key moment amongst many in the opening ten minutes which sets the tone and directorial intent. There are no hints of a film star here, as Lawrence exhibits post-traumatic symptoms alongside restrictive motor movement.

Holed up in a halfway house for recovering army veterans, her full-time caregiver Sharon (Jayne Houdyshell), shows patience and tenderness as Lynsey slowly makes progress. A montage of physiotherapy sessions, dignity-stripping toilet trips, and tutorials in basic bathroom skills follow, revealing an actor unconcerned with appearances. This is a return to Winter’s Bone territory for an actor who has successfully conquered mainstream action flicks and arthouse indie fare.

Here the character requires a degree of honesty on the screen which few leading ladies are prepared to offer. There are no scenery-chewing monologues, no ostentatious emotional arcs, and even fewer examples of Apple financing. Causeway is just a film with some powerful things to say about people connecting.

Returning to her hometown from a tour of Afghanistan with a serious brain injury, Lynsey needs time to re-adjust. With four different types of medication designed to keep any post-traumatic tendencies at bay, her only human contact comes through Doctor Lucas (Stephen McKinley Henderson) and car mechanic James (Brian Tyree Henry). Her mother Gloria (Linda Emond) plays a minor part in conversations on occasion, but in the main their on-screen time is limited.

What starts out as a business arrangement following some car trouble soon blossoms into a tentative friendship between Lynsey and James. He is an amputee who lives alone following an acrimonious break-up while she comes to him with her own unique set of emotional baggage. Together, they find common ground, nurture a connection and finally begin to trust each other.

This is where the heart and soul of Causeway resides, as Lynsey and James share recollections in an effort to alleviate their loneliness. Away from prying eyes, she is afforded some privacy as a pool cleaner, sieving leaves and cleaning filters to earn money. It is there in a backyard chit-chat while the residents are out of town, that their relationship comes to a head.

It is one of the few moments throughout this film that voices are raised, as their dynamic changes in an instant. Words are exchanged, feelings are voiced and equilibrium is lost for a moment as these two people cross the line. In a movie primarily defined by silence, it allows both actors an outlet for pent-up emotions, not only confirming their odd-couple chemistry, but revealing how much they need each other.

There is an eloquence in the journey these people take to experience that epiphany, which is reassuringly simple in its execution. Causeway is refreshingly free of pretension or overly complex character arcs, which means that the central performances are more powerful for it. Brian Tyree Henry matches Jennifer Lawrence moment by moment in their scenes together, imbuing James with an understated tenderness tinged with regret.

One kind gesture has burdened him with a lifetime of looking back, forever dwelling on choices made in haste but repented at leisure. On the flip side, Lynsey seeks salvation in solitude perpetually disconnected from others, holding them accountable for her life choices. A military regime gave her purpose and direction when nothing else would. This is why, in her opinion, this small town is something she needs to escape from.

Beyond the staggering central performances from both Jennifer Lawrence and Brian Tyree Henry, there is also the small matter of Stephen McKinley Henderson. The veteran stage actor, revered ensemble player, and scene-stealing thespian offers so much with so little as Doctor Lucas. He not only adds gravitas to his portrayal as Lynsey’s physician but reminds audiences that great actors are borne not made.

This is a fact any awards committee should be aware of come 2023 when Oscar nominations are first mooted and Jennifer Lawrence gets mentioned. In truth, Apple and A24 executives should really start drafting their Causeway campaign slogans now.

Understated but no less powerful for it, Causeway will remind audience what Oscar winning actors can do.