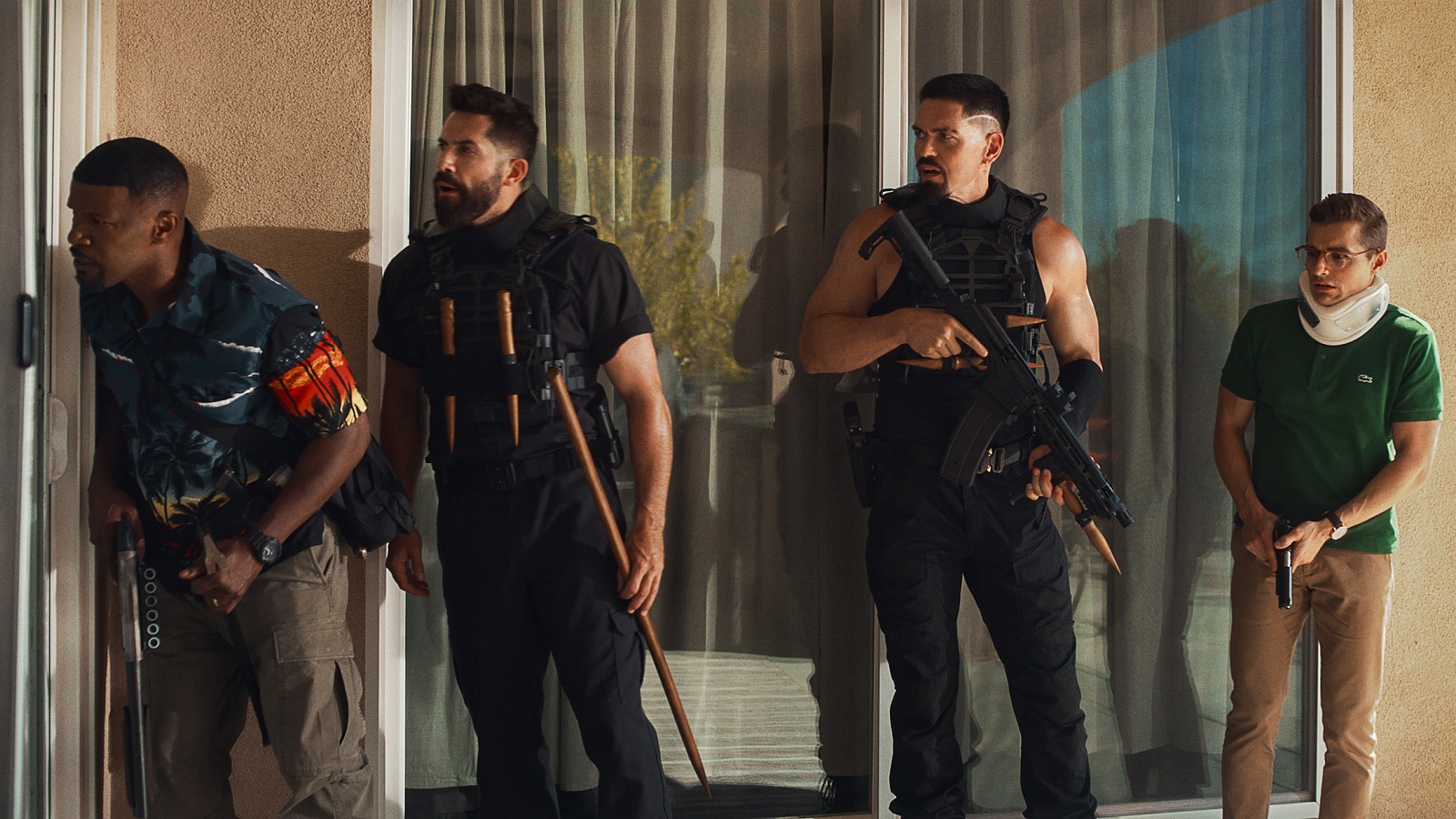 'Day Shift' just about gets by on its impressive action sequences, but everything else about the vampire horror comedy feels more than a little lacking.

Last August, Jamie Foxx headlined Netflix blockbuster Project Power, which took the standard trappings of the superhero genre and attempted to spin them into something new, with the end result becoming one of the platform’s most-watched original movies ever. Almost exactly one year to the day later, the Academy Award winner is back to take center stage in Day Shift, which attempts to do pretty much the exact same thing with the vampire flick, but your mileage may vary on how successful he’s been second time around.

There’s plenty of intriguing talent attached to the film on either side of the camera, with first-time feature filmmaker J.J. Perry hoping to follow in the footsteps of John Wick‘s Chad Stahelski, Deadpool 2‘s David Leitch, and Extraction‘s Sam Hargrave in making the jump from stunt coordination to directing, while the aforementioned Stahelski is also listed as one of the producers, the script is co-credited to John Wick: Chapter 3‘ and Army of the Dead‘s Shay Hatten, with Wick, Atomic Blonde, Nobody, and Bullet Train production company 87Eleven involved, which is quite the assembly of action experience.

As you’d imagine, then, the set pieces are comfortably the standouts of a muddled genre-bender that relies too heavily on superfluous plot beats and largely unfunny attempts at comedy, wasting a stacked ensemble cast in the process. However, it ticks enough boxes to serve as entertaining enough Friday night viewing, even if it’s very unlikely anyone is going to be talking about Day Shift a month from now.

Perhaps the most far-fetched thing about the entire film (which revolves around an underground cabal of vampire hunters attempting to thwart an underground takeover by the hordes of the bloodsucking undead) is that the cool and composed Foxx plays a dude named Bud Jablonski, who finds himself in dire need of cold, hard cash to prevent his estranged wife and daughter from upping sticks and moving to Florida.

Bud needs $10,000 quick, so he calls in a favor from Snoop Dogg’s Big John Elliot to get him back in the good graces of the vampire-hunting union, run by Eric Lange’s mulleted Mike Seeger. However, Dave Franco’s Seth is assigned to keep an eye on the reckless slayer of garlic-fearing creatures to ensure he won’t be welcomed back into the fold.

Inevitably, things take a turn for the complicated when a seemingly-innocuous kill ends up capturing the attention of Karla Souza’s real estate mogul/vamp Audrey, who also wants to buy up as much property in the San Fernando valley as possible in order to stealthily have her underlings dwell right under everyone’s noses, utilizing a widely-banned form of sunscreen so that her minions can emerge during the daytime.

If you’re thinking that’s an awful lot of plot for a 114-minute actioner that’s largely been built and sold on the back of odd couple comedy, Foxx getting back into his heroic groove, and Snoop Dogg wielding a massive Gatling gun to mow down reams of vampires, then you’ll be shocked to hear that we haven’t even mentioned Natasha Liu Bordizzo’s neighbor with a secret Heather, Peter Stormare’s pawn shop owner Troy, or Scott Adkins and Steve Howey as a pair of ass-kicking freelance sibling hunters.

That’s the largest problem with Day Shift as a whole; the choreography, grisly violence, and body horror is as exhilarating and impeccably-staged as you’d expect from someone with director Perry’s background, and he’s got a bright future ahead as an orchestrator of crunching onscreen violence, but virtually every fast-faced and hard-hitting beat is immediately followed by scene upon scene of tedious exposition, or detours into subplot territory that the movie could have comfortably done without.

We’ve all seen the “doting father trying to do what’s best for his family before they get kidnapped by his enemies as a result of the secret profession they never knew about” setup a thousand times before, but throwing fangs and an aversion to silver into the mix doesn’t make any of Day Shift feel particularly new. There are a couple of good gags, but when the recurring jokes are largely restricted to Franco peeing his pants and the bylaws of the union being tossed back and forth, it grows tiring real quick.

There are neat twists to established vampire lore peppered throughout, but none of it is presented as being as interesting or engaging as it should be; there are multiple different species of vamp, fangs are removed postmortem and sold for cash, non-union kills have to be remunerated on the black market, each breed has its own strengths and weaknesses, and so on, but it’s all just window dressing for another gun-heavy sugar rush of contorted bodies, blood splatter, and decapitation.

Had the story been trimmed down significantly, with several elements being either stripped back or removed entirely, then Day Shift would have been an unqualified triumph. As it stands, though, it’s got more than enough about it to keep Netflix subscribers happy for a couple of hours, while also leaving the door wide open for a sequel should the viewership numbers live up to expectations.

That being said, in the grand scheme of things it’s a missed opportunity to throw action, comedy, horror, and vampires together into the cinematic blender and come up with something completely new, exciting and fresh. Instead, it’s a comforting soup of flavors you’ve tasted before, of which you’ve definitely had better.

'Day Shift' just about gets by on its impressive action sequences, but everything else about the vampire horror comedy feels more than a little lacking.