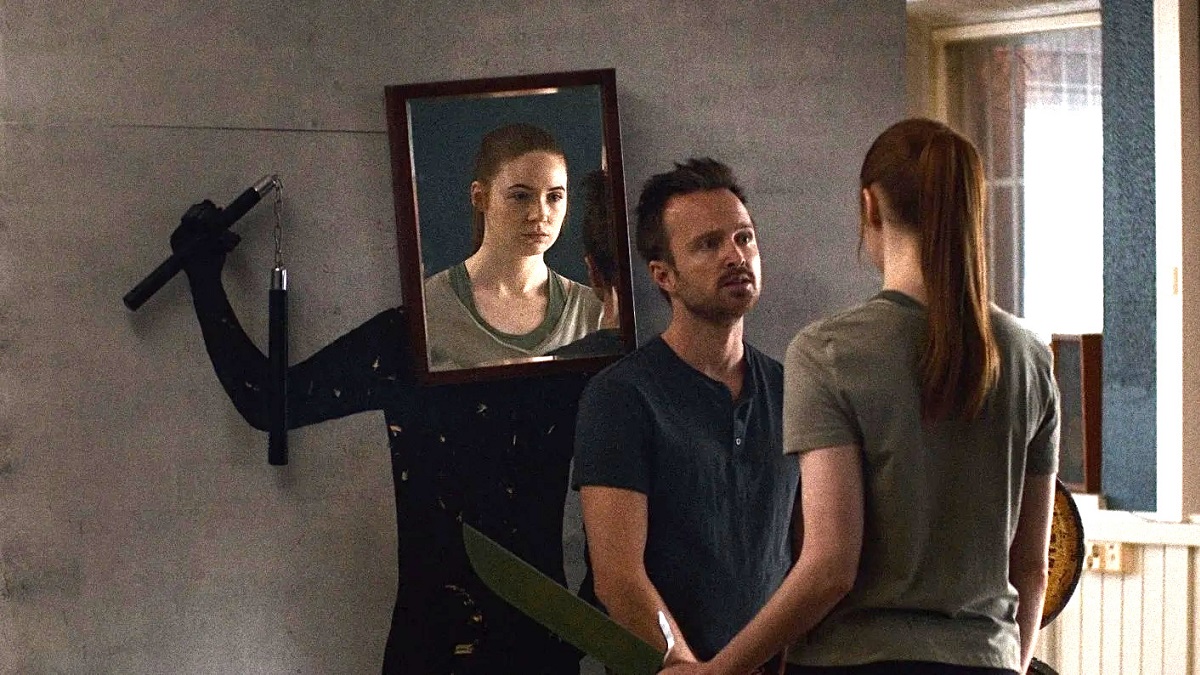 Review of: Review: 'Dual' is a melodrama held together by Karen Gillian on powerhouse form

This searing social satire on identity in contemporary culture features a career-best turn from Karen Gillian on powerhouse form.

When it comes to human cloning, there have been numerous cinematic journeys undertaken over the years. Blade Runner is perhaps the most famous, while others with a more contemporary edge include The Island and Swan Song. However, writer and director Riley Stearns has taken a more grounded approach to the concept in his latest film Dual.

Headlined by Karen Gillian and featuring Aaron Paul, this present-day take on the idea introduces televised death matches early on, as trained participants take on their clones in government-approved combat. This low rent Hunger Games segue feels appropriately indie in budget, giving Dual its own cinematic identity from the outset. However, the direction soon switches to delve into the realms of relationship drama.

By focusing on Gillan’s Sarah and her relationship with Beulah Koale’s Peter, Dual soon turns into an awkward character study, with smatterings of social commentary. Satirical adverts extolling the virtues of owning your own clone are mildly amusing, but lack subtlety. On a broader level, everyone in the movie’s universe seems incapable of having a sincere conversation, preferring instead to focus on superficial stimuli, rather than directly engaging with each other.

As a couple, Sarah and Peter barely spend any time together, making interactions unwieldy, and intimacy almost impossible. With stilted conversations and bland responses, it’s clear that this is a relationship on its last legs. Devoid of passion and lacking a sense of direction, her terminal diagnosis ironically injects some essential momentum into proceedings. As these two people get by on emotional autopilot, seemingly incapable of expressing anything close to a feeling, Dual dives into darker waters, exploiting the revelation of Sarah’s condition for dramatic effect.

Gillian is consistently excellent in her duplicitous role, introducing a variety of individual traits which makes each persona distinct. By treading a thin line between unassuming and inventively cunning, each incarnation seamlessly interacts, making these two versions of Sarah somehow more human. By detaching herself and forming a blank canvas, Gillian is able to imbue each facet of her portrayal with an inhuman quality. It’s a behavioral quirk which only becomes more pronounced over time, providing Dual with the propulsion it needs throughout.

In the past, many actors have attempted to perform opposite themselves onscreen and come unstuck, while technology has never made the conceit completely seamless. Exceptions to the rule include Tom Hardy in Legend, while Will Smith’s Gemini Man only confirmed that superior visual effects are nothing without a good story. Dual addresses the two-sided elephant in the room by allowing any bells and whistles to support the narrative, rather than overpower it through the use of needless computer-generated distractions.

Another crucial element worthy of note is Aaron Paul, who has been very selective in his career choices post-Breaking Bad. As Trent, he plays a combat trainer who systematically prepares Sarah for her own battle royale. In these sequences, both Paul and Gillian maintain a deliberately cumbersome chemistry, which complements the tonal choices that have come before, whilst adding a subtle comedic edge.

However, when circumstances change and Sarah goes into remission after 10 months of preparation, another crucial twist occurs, one which changes everything. In that final third, Dual delves further into what it means to be human and what identity really represents in contemporary society, doing so by honing in on some brutal home truths.

Having been created and tasted a little bit of life, Sarah’s double wants to stick around, meaning that someone has to die. A decision which is seemingly made easier by the fact that Peter is attracted to her, while even Sarah’s mother finds this version more appealing. In terms of making a point, this particular element of Dual cuts deeper than most, as nothing stinks more than family favoritism.

Needless to say, this epiphany is not the last on the list from a film with big ambitions. It is so much more than just a staggering central performance from Gillian, with solid support from Paul and others. In the final minutes when all those pennies start to drop, audiences will be left pondering much more than merely the ethical arguments on the surface.

As Sarah considers the life she’ll lead going forward, trapped by routine and responsibilities that no longer feel so attractive, there is more than a modicum of regret simmering beneath the surface. In the final frame, realization turns to blind panic, when she understands that just being human comes with its own set of problems.

Review: 'Dual' is a melodrama held together by Karen Gillian on powerhouse form

This searing social satire on identity in contemporary culture features a career-best turn from Karen Gillian on powerhouse form.