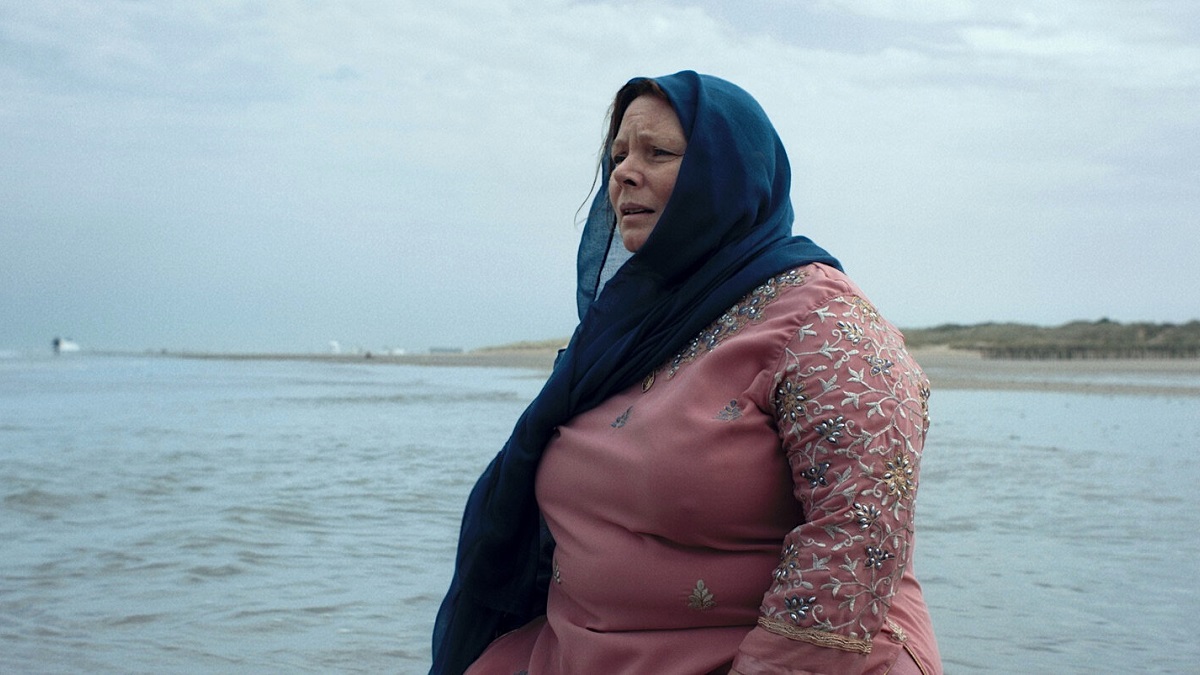 In After Love, there is is this recurring image of the White Cliffs of Dover, hauntingly bright covered with lush green grass, upon which Mary – played by Joanna Scanlan – often stands, almost as if she were their continuation. It’s a silent presence throughout, overbearing for its scope, and blinding for its color, and it is a tangible personification of grief.

After Love‘s story unfolds after Ahmed, Mary’s husband (Nasser Memarzia), dies suddenly in the first minutes of the film. As Mary deals with the shock, she discovers, among Ahmed’s belongings, vestiges of an entirely secret life led by her husband. She travels across the English Channel to Calais to meet Genevieve (Nathalie Richard), the woman Ahmed had been seeing for years, only to discover the two also shared a son. On the ferry, Mary looks back at the cliff where she used to stand as she waited for Ahmed to come home, it starts violently crumbling down, and no one else seems to notice.

Afraid of the inevitable confrontation ahead, Mary accepts it when Genevieve mistakes her for a cleaning lady she had contracted, and spends weeks helping Ahmed’s hidden second family pack up their home to move somewhere else. From the unassuming position she finds herself in, Mary gets to infiltrate the home and discover its secrets in ways the truth would never allow her.

Mary connects with Ahmed’s son, Solomon (Talid Ariss), as the last remaining extension of her husband, after she catches him in bed with his boyfriend. They bond over the link he craves and she can provide to Muslim and Pakistani culture, through food and a simple conversation in Urdu. In a lot of ways, they are both coming of age together – Solomon as he attempts to conjugate all the different, opposing sides of himself to form his core identity, and Mary as she comes to terms with the destruction of her own.

There’s a lot of generosity in the way Mary and Genevieve connect, too. The former develops not scorn but sympathy for “the other woman,” and the evolution of their relationship is subversive, gutsy, and incredibly surprising.

Every night, when Mary returns to the bed and breakfast she’s staying at in Calais, her private journey is uncovered and laid bare, sometimes literally, as she grapples with what this new found information means for her faith, her selfhood, and her body at the most visceral level. It’s a sensible, incredibly respectful, yet never cowardly, exploration of middle-aged womanhood by debuting director Aleem Khan, who took inspiration from his own mother to create the character. Like her, Mary also converted to Islam after marriage, and assimilated the culture.

You can feel After Love‘s deeply personal essence at every corner. The characters feel incredibly human and lived-in, and despite its subject matter, the film never dips into the melodramatic. When it all reaches a boiling point and Mary feels forced to confess, it’s loud and emotional, but never excessive. At times, the protagonist can come off as stiff or phlegmatic, but the brief moments of release and introspection that Khan allows for, end up defining the narrative he creates.

What transpires is a tale about compassion, identity, and, above all, the cliff-sized grief that crushes you when a significant part of your life ceases to exist. However, After Love is less about the people that pass than it is about the legacy they leave behind, the ripple effect that all their actions have on those around them, that reverberate long after they’re gone. It’s a story about learning to be okay with the enormity of life and the very small part you play in it, after all.

From BAFTA-nominated director Aleem Khan, and BAFTA-winning actress Joanna Scanlan, this visceral exploration of grief offers one of the most honest and generous representations of middle-aged womanhood in recent memory.