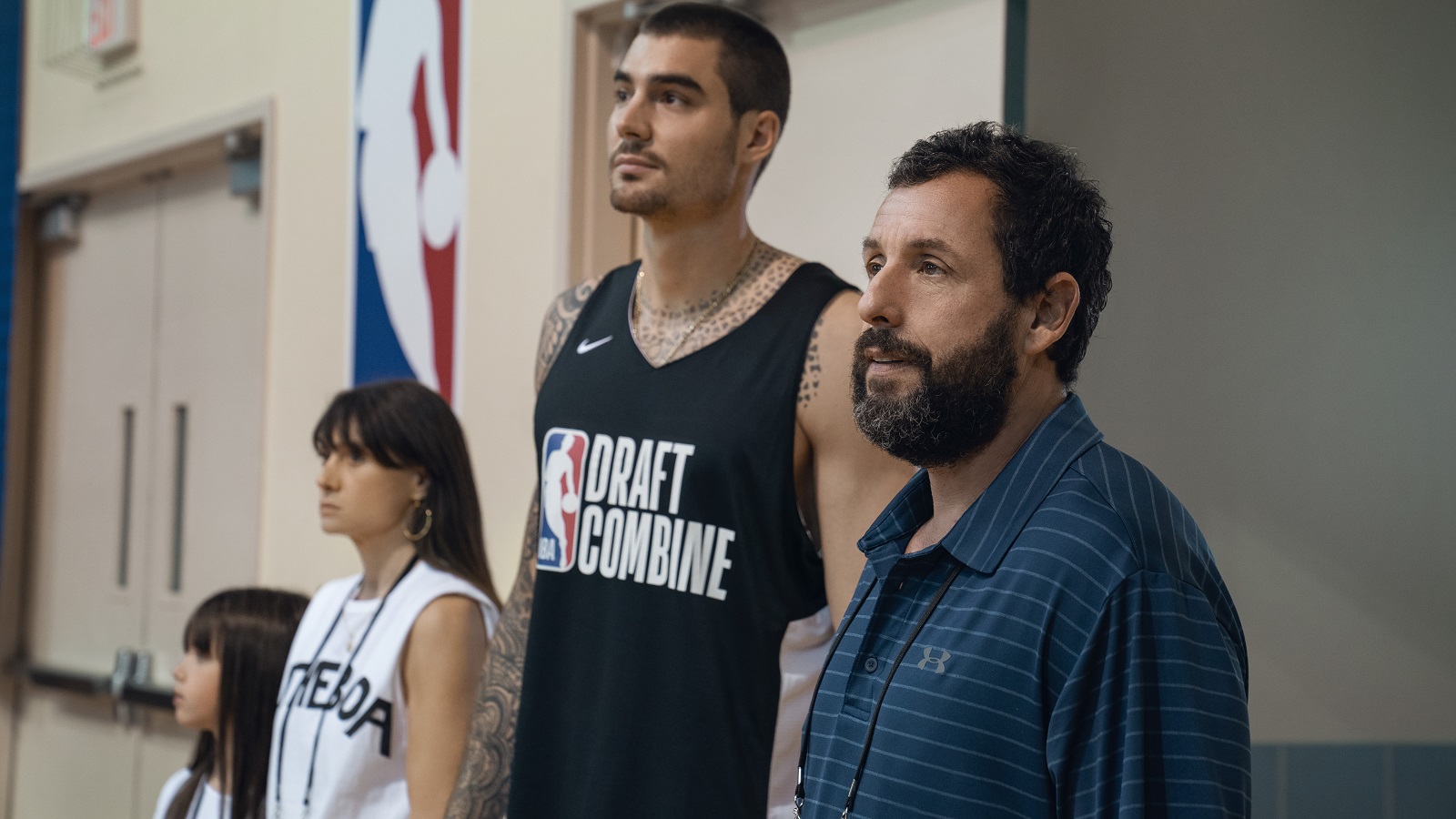 via Netflix
Review of: Review: 'Hustle' ditches the Adam Sandler formula for what might be Happy Madison's best yet

It might be formulaic to a fault, but winning sports dramedy 'Hustle' is arguably Happy Madison's best-ever feature.

Adam Sandler’s partnership with Netflix has proven to be hugely beneficial for both parties, with the actor and producer arguably establishing himself as the platform’s biggest draw since he took his Happy Madison outfit exclusively to streaming. The only downside is that none of the movies to emerge as a result have been particularly good, at least until Hustle premieres on June 8.

Having relied on largely the same formula since the mid-1990s, most viewers assume they know what to expect from a Sandler star vehicle. The cast, crew, and creative team will have collaborated with him at least a handful of times before, the setting will be an excuse to jet off to a glamorous location or two, the protagonist will be a petulant man-child, and the humor will be broad to the point of crassness.

However, Hustle is none of those things, which is why it comes as both a complete surprise, and a total breath of fresh air. Perhaps venturing outside of his wheelhouse to further explore his underrated dramatic side in Uncut Gems (which ironically wasn’t a Happy Madison joint) has lit a fire under Sandler, because Jeremiah Zagar’s basketball dramedy might very well be the best film the company has ever lent its name to.

Don’t get us wrong, the narrative is entirely predictable and hits every single one of the beats we’ve become conditioned to expect from a redemptive sports story, but that doesn’t make it any less enjoyable to get to that point. Those expecting standard Sandler fare may be disappointed, but if this is the direction the 55 year-old is planning on taking his career in the future, then we’re fully on board.

Sandler’s former collegiate basketball standout Stanley Sugarman is the living embodiment of someone who dedicated their life towards trying to salvage whatever was left of their wasted potential, with a car accident robbing him of his lifelong dream. He’s spent his entire professional career as a scout for the Philadelphia 76ers, who’ve spent decades sending him around the world to seek out the latest can’t-miss prospects, which has had a hugely adverse affect on his personal and familial relationships.

When Robert Duvall’s mentor Rex Merrick is succeeded by Ben Foster’s son Vince as owner, Stanley finds himself more frustrated than ever. During a routine trip to Spain, he accidentally stumbles upon street-level sensation Bo Cruz (played by NBA star Juancho Hernangómez), and winds up staking his entire reputation and a great deal of his own money on the unproven youngster’s ability to make it in the big leagues.

With the setup out of the way early, Hustle instantly settles into a groove that’s as familiar as a warm embrace. There’s triumph and adversity in equal measure, strained interpersonal dynamics, fallouts, setbacks, arguments, and more than a few montages, but Zagar’s stylish direction and a fantastic central Sandler performance will keep you engaged from the first to last minute. On absolutely no level does the film break any new ground whatsoever from a storytelling or visual perspective, but that doesn’t mean it isn’t a hugely effective piece of understated cinema.

Taylor Mateme and Will Fetters’ screenplay is admirably economical, too, wisely assuming that everyone will be well acquainted with the broad strokes of an archetypal journey from A to B via a road paved with obstacles, but it would nonetheless be a huge disservice to Hustle to simply label it as “Adam Sandler does Jerry Maguire“, even if that’s effectively what it is when boiled down to the core.

There’s still plenty of humor, though, and one or two classic Sandler freakouts to appease the diehards, but it’s always organic to the events unfolding on screen, as opposed to being shoehorned in for the sake of wringing as many laughs as possible from seeing the actor in his oversized shorts get schooled by a man a foot taller than he is.

Sandler, Hernangómez, Duvall, Foster, Anthony Edwards, Kenny Smith, Queen Latifah (unfortunately wasted as the one-note wife, but still charismatic and charming enough to make it work), and others might be embodying fictional figures, but there are literally dozens of NBA-adjacent figures who either cameo or play supporting roles as themselves, lending Hustle a tangible air of reality that heightens the tension and dramatic stakes, even if the endgame is entirely predictable.

There are of course numerous gags revolving around titties and bodily fluids (this is still a Sandler flick, after all), but they’re used to inform scenes of either locker room talk or exchanges between longtime buddies, rather than aiming for the lowest common denominator as has been Happy Madison’s previous remit, while Sandler has never been more self-deprecating as Stanley. It’s as if he’s finally broken through the looking glass of self-awareness, with the role simultaneously embodying what we’ve come to expect from his starring turns while painting it in newer, more subtle shades than ever before.

Hustle leans into and embraces the biggest and most blatant of tropes, yet always (and very deliberately) pulls away at the last second. Stanley and Bo end up as the firmest of friends, but they don’t walk into the sunset together. Everything builds towards the latter’s final shot at professional basketball stardom, but there’s no “big game” sequence or last-minute buzzer-beater. In oxymoronic terms, it’s believable fantasy; it takes place in a world just outside of our own, but everything is presented as true-to-life.

It isn’t anything you haven’t seen a handful of times before, then, but that’s exactly why Hustle works so well. It’s a 117-minute blanket of comfort that delivers precisely what you want to see from an underdog sports story, and never tries too hard to be anything else. At the center of it all is Sandler, who hopefully uses the end product as the platform to move away from his stale routine and outdated screen persona to give us more knockout, understated, emotionally-driven, but still undeniably impressive tour-de-forces like this.

Review: 'Hustle' ditches the Adam Sandler formula for what might be Happy Madison's best yet

It might be formulaic to a fault, but winning sports dramedy 'Hustle' is arguably Happy Madison's best-ever feature.