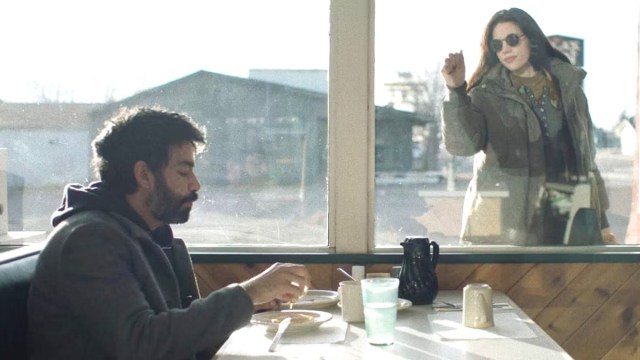 via Magnet Releasing
Review of: Review: 'Next Exit' asks big questions on an existential road trip towards the afterlife

Writer and director Mali Elfman's 'Next Exit' might revolve around the biggest question of all, but it's the standout performances from Katie Parker and Rahul Kohli that comfortably carry a road trip odd couple comedy with a hefty existential twist.

What happens after we die is one of the biggest unanswered questions in the history of humanity and civilization, as well as being one that’s never going to be definitively answered… at least, as far as we can predict. The chin-stroking conundrum serves as the heart of writer and director Mali Elfman’s feature-length debut Next Exit, although not quite in the way you would think.

That becomes abundantly clear in the very first scene, in which we witness a child interacting with the spirit of their deceased father, all part of an experimental new scientific process known as Life Beyond, pioneered by Karen Gillan’s Dr. Stevensen. Effectively encouraging euthanasia, willing participants sign up to be sent into the great beyond, allowing the program to continue researching what really happens when our time on the mortal and physical plane comes to and end.

The eternal debate over the afterlife always boils down to “science vs. faith”, but that’s not an argument Elfman is interested in rehashing. Both sides of the divide are addressed, though, albeit largely through expositional videos featuring Gillan’s suspiciously Elizabeth Holmes-like Stevensen, who doesn’t appear anywhere other than onscreen videos, press conferences, or news reports. Science has proven there is something after death, but it’s up to the individual whether their faith dictates they go there as soon as possible (aiding science in the process), or if they wait for it to occur naturally.

It’s heady, existential stuff, but that’s only a small part of the many disparate genre elements woven neatly together throughout a brisk 103 minutes. Katie Parker’s Rose has given up on life and can barely wait to submit to the whims of Life Beyond, while Rahul Kohli’s Teddy has seen his very existence defined by disappointment – so he’s ready and willing to give his life to the cause in the name of being remembered for doing something special.

Again, if that sounds like a hard-hitting drama designed to generate thought-provoking analysis, along with endless examination of the who, what, when, where, and why of how it all works, that’s not quite what Next Exit is. In fact, if you strip away the sci-fi trappings, what’s left is a heartwarming, often hilarious, and occasionally devastating hybrid of road trip buddy movie, romantic comedy, and character-driven drama, one that’s significantly elevated by a pair of knockout central performances from Parker and Kohli.

The Mike Flanagan veterans (she appeared in The Haunting of Hill House, he played a major role in Midnight Mass, while they’ve both been credited in The Haunting of Bly Manor, The Midnight Club, and the upcoming The Fall of the House of Usher) spark off each other beautifully, turning cliches on their head at every single turn. Their first interaction could even be called a meet cute, with a snafu involving hire cars and credit cards pairing them up in the first place.

Kohli’s star has been on the rise for a while, and he’s long since cemented his status as an internet folk hero of sorts, but Next Exit is comfortably his finest dramatic performance to date. We all know he can do comedy, and there’s an everyman charisma he brings to every single one of his roles, but it’s the dramatic moments where Teddy blows you away, as we dig deep into why he’s so willing to travel across the country with a complete stranger to die.

Similarly, Rose’s backstory gets filled in along the way, and while there are several brief flirtations with overwrought melodrama and signposted reveals that could (and maybe should) have been hidden better, Parker is equally phenomenal. The biggest credit you can give to the duo is that Next Exit would have been a hugely enjoyable film if it was nothing more than a straightforward odd couple comedy that found the central stars trekking across the United States to just about anywhere, with Elfman’s casting largely impeccable across the board.

As you’ll have seen in a thousand other movies, opposites always attract. Teddy and Rose are diametrically opposed with exactly the same goal in mind who form a connection neither of them wants or expects, and as formulaic as that sounds – it’s a joy to watch his offbeat exuberance gradually wear her down as their frostiness begins to thaw. She might be quite literally haunted by the ghosts of her past, and there’s plenty of dramatic heft pulled from the apparition that follows her everywhere, but Next Exit sings loudest in the moments where it’s nothing more than two people getting to know each other.

Next Exit aims high, and while it hovers perilously close to overindulgence at times, Elfman’s hugely accomplished first-time feature largely succeeds at every box it attempts to tick off. If you’re a fan of science fiction, romantic comedies, intimate dramas, ponderous ruminations on what it means to be alive, and excellent acting, then you’ll find all that and more within.

Review: 'Next Exit' asks big questions on an existential road trip towards the afterlife

Writer and director Mali Elfman's 'Next Exit' might revolve around the biggest question of all, but it's the standout performances from Katie Parker and Rahul Kohli that comfortably carry a road trip odd couple comedy with a hefty existential twist.