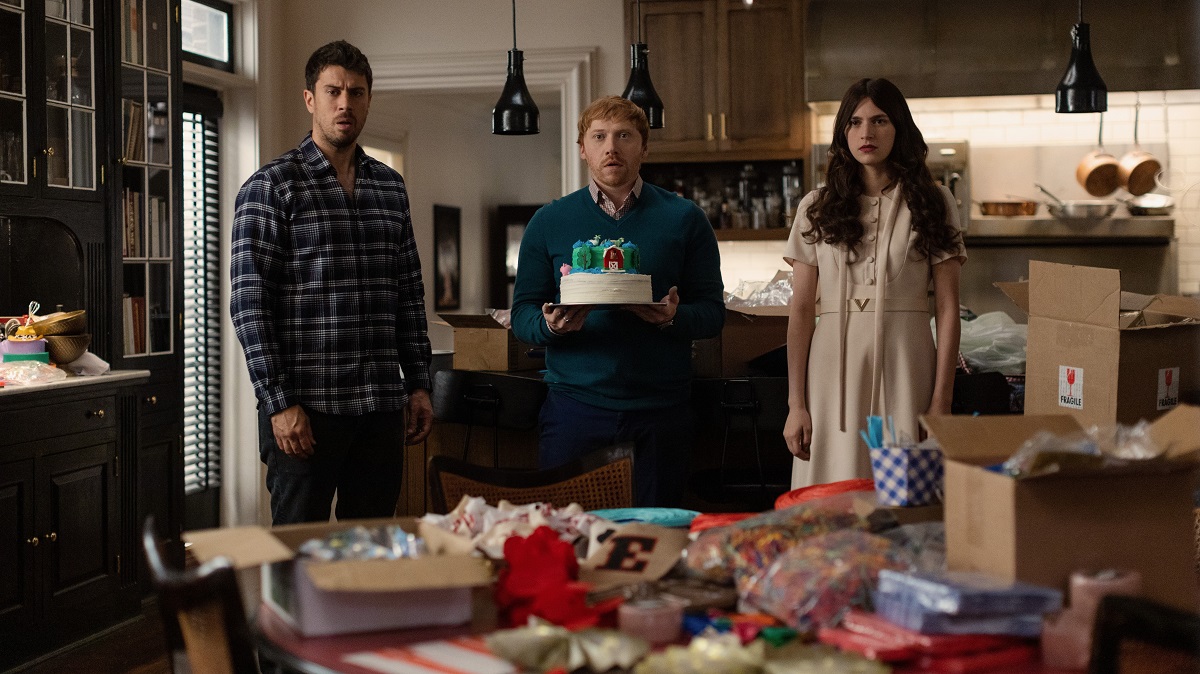 Season 4 of Servant promises a reckoning on Spruce Street, which will begin with homeless gatherings and continue inside as masonry cracks and basements subside.

This is when Leanne (Nell Tiger Free), Sean (Toby Kebbell), Dorothy (Lauren Ambrose), and Julian (Rupert Grint) will learn the truth. Only then will this whole twisted tale finally make sense and these people can move on. The question is after 40 episodes and copious bags of crazy, are audiences still going to care?

What remains true of this final season is how solid that central cast have become. Although the plotlines might have become more convoluted, their ability to sell any amount of narrative abstraction continues to astonish. First out of the gate and – potentially this show’s biggest asset – is Julian, who has graduated from wealthy hard-drinking brother to Dorothy into part-time lover to Leanne over three seasons.

Skulking beneath the conniving characterization, any memory of Grint’s former fame is buried in a shallow grave out back. Julian is self-seeking, self-absorbed, and singularly concerned for his own well-being, despite what he might say in times of stress. As the circumstances have spiraled and relationships have worsened, either because of interfering cults or his sister’s increasingly erratic behavior, he has remained steadfast in his self-centered attitude.

Likewise, Dorothy has experienced a similar sense of selfishness as Servant has played out. Turning from grief-stricken mother at the loss of her baby, through to unpredictable life partner for Sean as their short-term nanny turns into a long-term liability. Highly strung in the first instance, Ambrose has imbued Dorothy with an unpredictability, which sits in opposition to the methodical approach her husband takes to his cookery.

On every level, Servant is about the power dynamic that exists between our four principal players, as they seek to assert some form of dominance over the situation. Through a savvy combination of eerie soundtrack choices and predatory camerawork, Servant quickly established itself as a comeback call for M. Night Shyamalan, aided and abetted by co-creator Tony Basgallop.

Even though that first season remains its strongest, Servant has consistently upped the ante year after year, expanding on a chilling premise which has enabled these characters to grow. From the killing of a colleague in Isabelle (Molly Griggs), which bookended season 3, through to that horrifying tumble Dorothy took in the finale of the same run, this Apple original has never been short on surprises.

What season 4 manages to do is turn the screw just a little bit more, as this iteration takes on some serious Misery vibes. Bed-bound and suspicious, Dorothy spends much of her time recovering from that life changing fall. Distrustful of Sean and Julian, she builds up mental barriers which compare in savagery to the physical injuries Leanne left her with. Needless to say, their relationship defines much of what transpires on screen, as Dorothy fights to retain control over the house she lives in.

However, despite her best efforts, Leanne succeeds in invading any privacy Dorothy might have, whilst stripping any dignity away in the process. Many of their encounters hinge on a combination of incidental music which adds an undercurrent of dread, combined with the chemistry these actors have established over several years.

With bizarre infestations, desiccated corpses hiding behind the walls, and Leanne slowly morphing into Annie Wilkes – Servant slowly gets under the skin and stays there. Creating something akin to a classic spine-chiller in tone, as some creepy home help moves in to give Dorothy some peace of mind – an action which simultaneously insulates her from Leanne, while disrupting routines left right and center.

It is just another narrative twist which ensures audiences will pay attention, as this final season makes its way towards a cataclysmic conclusion. As Leanne begins to realize how influential she has become within the household, Tiger Free slowly lets this character realize her truly terrifying potential. Pulling on all the threads which bring this story together and cementing the reputation of Basgallop and Shyamalan in the process.

A fact which should prompt audiences to seek it out from January 13, when the final season of Servant hits streaming platforms, and Leanne delivers her coup de grace.

As off the wall as it is elegant, 'Servant' season 4 draws a satisfying conclusion from all those disparate elements. Rupert Grint remains the standout amongst an ensemble cast who continue to deliver. Worth a watch, and worth the wait.