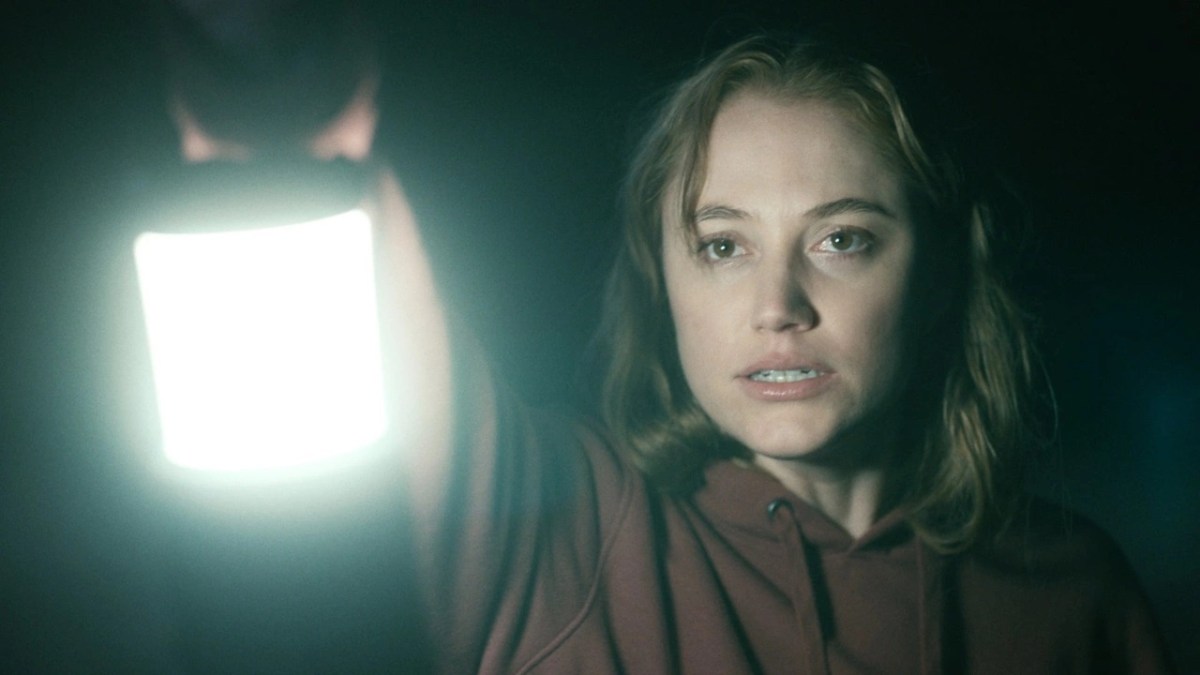 Ardent backpackers beware now that Significant Other is streaming on Paramount Plus, because outdoor enthusiasts may never venture into the woods again – in case they encounter more than inquisitive deer on their journey. Even those hardened hikers who trek uphill and down dale without fear may think twice before pitching tent again, once this in-house original is over.

Written by Dan Berk and Robert Olsen, Significant Other lives in the land of genre cliches where amiable couples bicker, while unseen forces linger one step behind. Opening on Ruth (Maika Monroe) and Harry (Jake Lacy) playfully fighting as they drive through hiking country, this film wastes no time establishing its premise. Cross-cutting between unidentified meteors crash landing, while creepy teenagers offer whispered warnings to our happy couple as they eat their burgers.

Overly dramatic music implies impending peril, before this intrepid twosome venture deep into the forest, preparing to face the first of many cliches en route. The writer/directors make sure to let their camera hang back, giving audiences the impression that Ruth and Harry are being tracked. Stripped back incidental music also leans into the subdued ambience, which naturally ramps up tensions as our couple walk on oblivious.

Having foreshadowed their arrival with some indiscriminate carnage, metered out by an unidentified entity on an unfortunate animal; it is clear things are never going to end well. That Ruth and Harry stumble on the remains early on psychologically underpins that sense of unease which the film so quickly relies upon. Unfortunately, such cinematic tactics will only induce indifference in viewers rather than fear, as Significant Other quickly drifts into convention.

Both Monroe (Honey Boy) and Lacy (The White Lotus) are substantially better than this movie, which means they are fundamentally wasted in their respective roles. Well-worn dramatic tropes include signposted jump scares, stilted fireside arguments, and mismanaged narrative threads all serve to unbalance this supernatural melodrama. Irrespective of how hard our plucky leads may work to convince audiences of this reality, it fails to feel grounded throughout.

Following an ill-advised marriage proposal from Harry, things really go off the rails as Ruth storms off – leaving him to ponder in solitude. That is when she stumbles upon a subterranean cave, which for reasons which are never explained, Ruth explores without employing any common sense. Predictably, she comes back half an hour later looking glassy eyed and devoid of any personality. From there, Significant Other fully embraces formula, whilst seemingly convinced that this idea is somehow unique.

Not only is this film significantly unoriginal in construction, but it also manages to be pedestrian in pacing as well. Once our supernatural entity starts possessing everybody in sight, momentum begins to diminish rather than increase. From that point on, both Monroe and Lacy are asked to do some distinctly odd things, which never actually makes the viewing experience any better.

There is some shapeshifting, a little shouting, and one or two additional casualties, which never really make an impact before the final reel. By then, any semblance of narrative sense has been jettisoned, as Berk and Olsen disappear down a rabbit hole that lacks any tangible logic. People are cocooned while others get to stomp around talking rubbish, which simply serves to suck the last remnants of tension from the situation.

For those who make it to the end of Significant Other, rest assured there are better films on Paramount Plus. This heinous misstep that lacks self-awareness and categorically wastes the talent of those involved is a lesson in little more than what not to do with company money. The studio would have been better off bringing any other horror franchise out of retirement and trying to resurrect it, rather than pouring precious doubloons into this futile enterprise.

With an exciting array of projects on the horizon from this fledgling streamer, it is inevitable that not everything is going to be golden. Audiences can only hope that Cleveland steamer genre movies like Significant Other are an exception rather than the rule. For anyone else in the industry who happens to be paying attention, this will stand testament to the fact that sometimes even Hollywood gets it wrong.

Review: 'Significant Other' Is Rife With Cliche and Wasted Talent

'Significant Other' is a substandard supernatural hybrid, which wastes the talent of all those involved. Maika Monroe and Jake Lacy may work hard to breathe life into this ponderous fireside fable, but often fall short through no fault of their own.