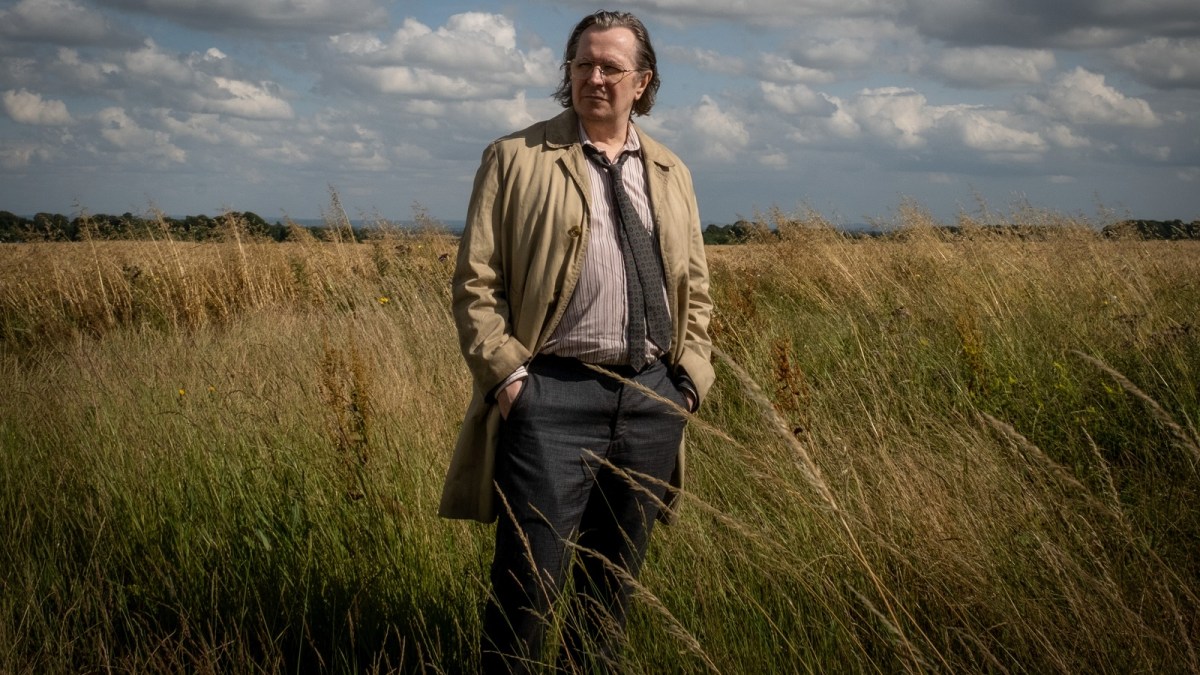 Dickie Bow (Phil Davis) surveyed passing traffic. Out of the game and under the radar, decades had passed since he had meant anything to anyone. That is, until a man emerged from the crowd, bringing back memories from a past best forgotten. So begins season 2 of Slow Horses on Apple, as Jackson Lamb and his team take a deep dive into the world of Russian sleeper agents.

Based on the books by Mick Herron, this fledgling spy series garnered untold amounts of attention when it premiered earlier this year. Helmed by James Hawes (Snowpiercer) and headlined by Gary Oldman, alongside Jack Lowden and Kristin Scott Thomas – season one proved to be a smash hit Apple original.

With this sophomore effort, audiences can look forward to more of the same, as a Cold War sleeper cell is reactivated for nefarious reasons. Protest marches, high-level covert meetings, and a little bit of biplane aerobatics await those willing to dive in for a second time. Using Herron’s source material and Oldman’s immersive performance as a jumping-off point, Slow Horses proves just as engaging this time round.

With Armando Iannucci’s regular collaborator Will Smith on script duties, this contemporary thriller is packed full of caustic putdowns and poetic vulgarity – mainly pouring from the mouth of Lamb as he dresses down his unruly charges. Not only maintaining his reputation as a hygienically challenged maverick, but ensuring that Slough House keeps functioning in his perpetual absence.

Beyond that, this slickly-produced sequel takes great pleasure in deviations, taking both Oldman’s Lamb and Lowden’s River Cartwright off into uncharted waters. From far-flung locales like the Cotswolds, through to backwater public houses around London – no expense has been spared when it comes to upping the ante for the gripping follow-up.

This time around, Scott Thomas’ Diana Taverner might play a less integral role in proceedings, but nonetheless it remains a real pleasure to see her opposite Oldman onscreen. There is nothing better for audiences than feeling they are in safe hands, which in the case of these two acting legends goes without saying.

Whether Lamb is negotiating for funding or reminding Diana that poaching his team is below the belt, their chemistry in character is undeniable, and gives this show real kudos. It should also be noted that this time around Lowden carries much of the show, while Oldman continues to be an understated bedrock upon which Slow Horses can rely.

Solid support also comes from Dustin Demri Burns and Rosalind Eleazar, as they are able to explore their dynamic more deeply away from the team. Both Min and Louisa are given more screen time, as well as a completely separate narrative, meaning that this story really benefits from multiple threads all running simultaneously.

Elsewhere, both Adrian Rawlins (Harry Potter), Catherine McCormack (Temple) and Phil Davis (Trying) give the smaller elements real substance – playing their parts to perfection as some unsavory individuals start trying to shut Cartwright and company down – either over drinks in a backwater flop house or whilst sharing Chardonnay al fresco during polite conversation.

Wherever audiences choose to look during this Apple original, there is no denying the quality in front of and behind the camera. Benefiting hugely from a reality shaped by genuine London locations, Slow Horses smacks of authenticity, whilst Oldman and his cohorts really get beneath the skin of these characters.

Despicable yet charming, this second season is eloquently plotted and flies by at speed, while Mick Jagger’s theme tune only serves to cement its already unique identity. Beyond the undercover shenanigans and aging relics left over from a bygone era, what this sophomore season has confirmed is simply that Slow Horses season one was no fluke. A fact Apple clearly agrees on since seasons 3 and 4 are already in the works, something which will have you believe Jackson Lamb is only getting warmed up.

Back for a second season, old-school espionage series 'Slow Horses' proves to be another home run for Apple. Building on solid performances from a solid ensemble cast, this sophomore effort sees Jackson Lamb tackle some ghosts of his own.