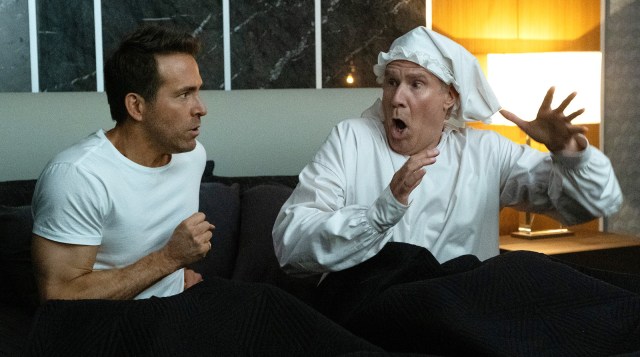 Image via Apple TV Plus
Review of: Review: 'Spirited' adds another string to the bows of Will Ferrell and Ryan Reynolds

This spin on the Charles Dickens classic is top-tier entertainment for anyone who likes a good show tune. With Will Ferrell and Ryan Reynolds heading up a cast including Octavia Spencer, 'Spirited' is pure wish fulfillment from start to finish.

If anyone ever wished for a yuletide musical complete with Will Ferrell and Ryan Reynolds, wish no longer, as Spirited seeks to scratch that itch from Nov. 18 on Apple. Not only rebooting A Christmas Carol for contemporary audiences, but doing so with some seriously festive dance numbers.

Written by John Morris and director Sean Anders, this savvy adaptation of the Charles Dickens classic enables both leading men to crank up their charisma. Ferrell is on haunting duties as Christmas Present, while Reynolds gets to embrace his cynical side through PR profiteer Clint Briggs – of which Anders makes certain to take full advantage of by allowing the chemistry between them to flourish, bound by nothing more than boatloads of show tunes.

After an infectious opening which introduces Marley (Patrick Page), Christmas Past (Sunita Mari) and Present – this Apple original wastes no time in laying down plot points. As is the tradition with this Dickens mainstay, redemption remains a moral imperative when it comes to making the story work. After over four decades of offering salvation to redeemable souls, Present is conflicted about retiring, and decides to stay on for one more year.

However, with all the Christmas pieces in place and scripted scenarios green-lit, these afterlife experts stumble into an unexpected problem. One which starts with the arrival of Reynolds’ Briggs, seconds after their intended choice makes his appearance. Above and beyond the cutting sarcasm, deadpan delivery, and effortless comic timing which follows, something much more surprising elevates Spirited above its competitors.

It turns out that Reynolds has the capacity to be a real song-and-dance man. Channeling the tunes of lyricists Benj Pasek and Justin Paul, both from La La Land, this laconic leading man hot shoe shuffles his way through a movie which is surprisingly light on schmaltz. Following a tried and tested formula which forces Clint to encounter pivotal moments in his life, with the intention of experiencing a life changing epiphany, Spirited remains an audiovisual treat packed with genuine charm.

With Ferrell in full force balancing family-friendly fare and adult-orientated humor, Apple have certainly delivered something special. Alongside Octavia Spencer as Clint’s personal assistant Kimberly, this film also showcases her captivating vocal talents, as well as introducing audiences to the softer side of Oscar winner, one that compounds the feelgood factor of this flagrantly festive musical, whilst also squeezing in a little love interest element.

That life lessons are learned and epiphanies experienced goes without saying, as writer/director Anders never shies away from emotional manipulation. When Spirited does drift into the arena of originality it occurs through structure, as this redemption story switches between central protagonists, allowing each one to reach their own emotional resolution before bonding over common ground.

Story and structure aside, the success of the film comes down to a sense of ensemble casting, where everyone involved bands together to make things work. Both Reynolds and Ferrell seem to revel in this chance to try something new, by throwing some real gusto behind every single musical number. The hit rate for these tunes is also surprising, since momentum in the main is maintained by their quality as a whole.

Thankfully, not only does Spirited contain some songs which are certain to become classics, but they are sung with a level of commitment which elevates everything else. Through a combination of supreme visual effects and inventive choreography orchestrated by Chloe Arnold, audiences will be swept along by this musical comedy way before they hit the holiday season proper.

Not only embracing the spot-on meta moments which pepper this shamelessly optimistic Christmas tale, but having their eyes opened to Ferrell and Reynolds as they have never been seen before. High kicking their way through a series of majestic show tunes that might not challenge Broadway regulars, but certainly deliver their fair share of showstopping moments from two of Hollywood’s most unlikely musical stars.

Big on spectacle and bigger on life lessons, Spirited manages to surprise, inspire and entertain in equal measure. Not only by subverting certain expectations, but by gambling on the untested abilities of an ensemble who come through in the best way possible.

Review: 'Spirited' adds another string to the bows of Will Ferrell and Ryan Reynolds

This spin on the Charles Dickens classic is top-tier entertainment for anyone who likes a good show tune. With Will Ferrell and Ryan Reynolds heading up a cast including Octavia Spencer, 'Spirited' is pure wish fulfillment from start to finish.