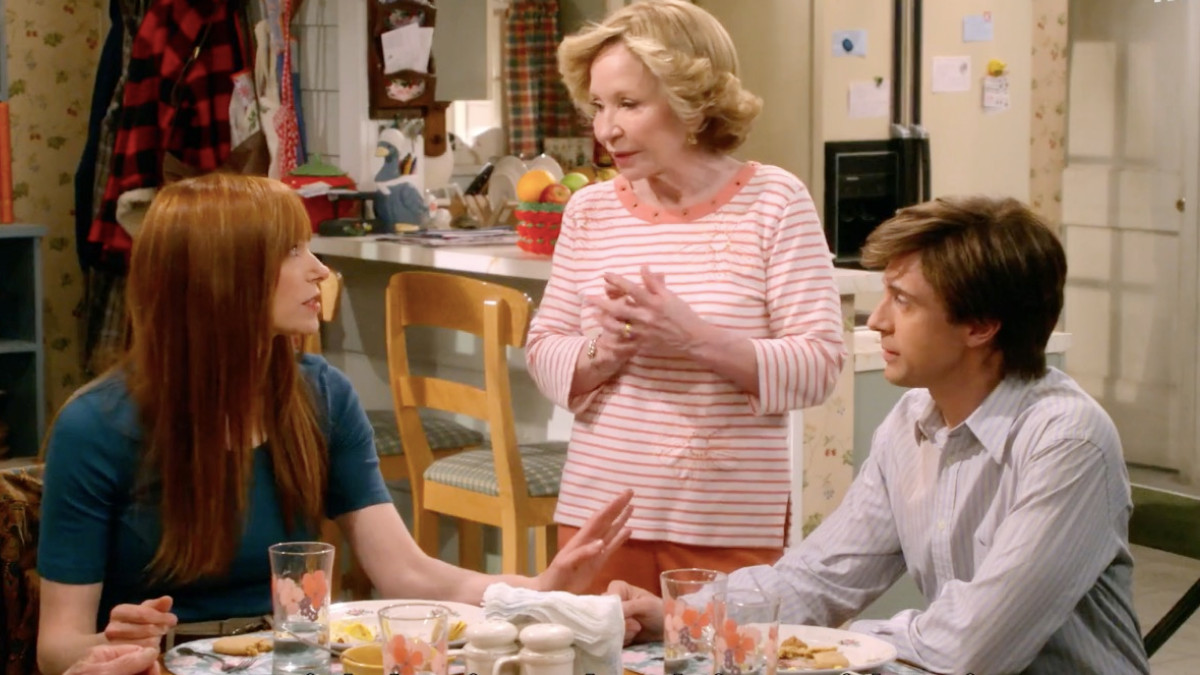 That ‘90s Show is the latest classic beloved sitcom to get the revival treatment by Netflix, after the original series, That ‘70s Show, gained a new audience on the platform before being removed in October 2020. And like Fuller House before it, the formula somewhat works, in that the revival, which takes place over the summer of 1995, is a cute diversion that plays off the nostalgia of the original series while bringing in a fresh new cast of teens to pick up where “the circle” left off.

The series focuses on Leia Forman (Callie Haverda), the teenage daughter of Eric Foreman (Topher Grace) and  Donna Pinciotti (Laura Prepon) from That ‘70s Show, who decides to spend the summer with her grandparents Red (Kurtwood Smith) and Kitty (Debra Jo Rupp) in Point Place, Wisconsin instead of attending space camp with her father. Because if you haven’t already surmised from his daughter’s first name, Eric is very much still the tremendous, Star Wars-obsessed dork who fans grew to know and tolerate.

To appease fans of the original series, nearly every That ‘70s Show cast member likewise makes appearances throughout the first season — with the notable exception of one character who isn’t so much as mentioned in passing for reasons that are pretty evident.

Early on, the big twist is revealed to be that Jay is actually the son of Michael Kelso (Ashton Kutcher) and Jackie Burkhart (Mila Kunis) — who apparently eventually got back together, despite the series ending with Jackie and Fez as a couple. This comes to the initial and obvious chagrin of the adults, considering that the character is meant to be a love interest for Leia. The brief cameos also give Kutcher and Kunis, who are now married in real life, a chance to spark back up their onscreen chemistry, even if for just a few moments.

Fez (Wilmer Valderrama) is likewise now the successful owner of a local chain of salons, as well as the boyfriend to Gwen and Nate’s irresponsible single mother Sherri (Andrea Anders, Ted Lasso), who often leans on Kitty and Red to wade through her drama and clean up her messes.

It’s obvious that the original players, Rupp and Smith, in particular, are having a blast at getting to share screen time again, which is where the revival really shines. Kitty can’t be more thrilled to have her empty nest filled with teens again, while Red is decidedly less enthused about the return of so-called “dumbasses” — Sherri and Fez included.

Where the series doesn’t so much land is that the young cast, at least during the initial 10-episode order, doesn’t exactly share the chemistry or comic timing of their That ‘70s Show counterparts — with the notable exception of Doi’s Ozzie. Perhaps this is due to the fact that each character seems to be a “lite” 2.0 take on the original cast (despite never having been mentioned, Gwen is obviously a counterpart to Danny Masterson’s Steven Hyde) instead of organically introducing a brand new cast of teens, each with their own unique personalities and quirks.

For instance, Haverda’s Leia suffers from being pigeonholed into the awkward shoes of Eric Foreman, leading the young actress to lean heavily on overwrought, wholly unconvincing comic acting. Meanwhile, Coronel’s Jay brings little to the table other than fluttering his boy eyelashes, and his bromance with Nate lacks the charm that Kutcher and Masterson brought to their own similar dynamic. By the time Jay finally goes full Kelso in the season one finale — yelling his father’s trademark catchphrase at his friend — it’s too little, too late.

Even Gwen and Nikki, who share a disdain for one another being Nate’s half-sister and girlfriend, respectively, lack the adversarial relationship of, say, Hyde and Jackie in the original series. That ‘70s Show was a success because of those complicated, sniping relationships between characters — and without that, even the tried and true circle sessions (after the gang discovers their older counterparts nearly two-decades-old stash) feels empty.

If the series gets picked up for a second season, it’s certainly possible that the writers might find greater success by fleshing out the characters a bit more and allowing them to come into their own — ideally, with a bit more believable bickering. But if nothing else, That ‘90s Show is a comfortable watch that fans of the original should enjoy insomuch as taking an easy, if not a mostly forgettable trip down nostalgia lane.

But if nothing else, That ‘90s Show is a comfortable watch that fans of the original should enjoy insomuch as taking an easy, if not a mostly forgettable trip down nostalgia lane.