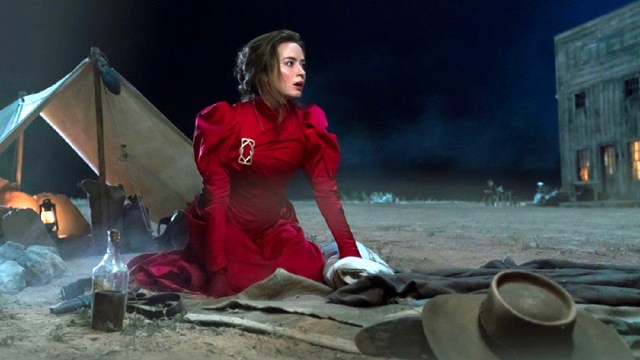 via Amazon Studios
Review of: Review: 'The English' sends Emily Blunt out west seeking revenge, but gets a little lost along the way

'The English' is stunning to look at and a phenomenal showcase for its ensemble cast, but the six-episode series is a little too leisurely in its pacing to make the revenge-driven Western as riveting as it should be.

As the star and executive producer of her first-ever recurring television role, The English at the very least guarantees an opportunity for Emily Blunt to sink her teeth into a substantial character arc that allows her to flex every single one of her acting muscles. While that’s definitely true of creator Hugo Blick’s six-episode miniseries that premieres on Prime Video this coming Friday, there’s an awful lot of meandering along the way.

The basic thrust of the story is simple and straightforward enough, with Blunt’s Lady Cornelia Locke compelled to travel to the still fairly lawless American West to seek revenge on the man she holds responsible for the death of her son, but after a blockbuster opening episode, the pacing begins to slow down as tonal imbalances and borderline overindulgences threaten to overwhelm what reads as a relatively A-to-B narrative.

Almost immediately upon her arrival, Cornelia encounters Chaske Spencer’s Eli Whipp, who’s been strung up and left for dead. Individually, they’ve got so much emotional baggage that not even the sturdiest of steeds would be able to support it, but the unlikely duo nonetheless forge a tenuous alliance based on their shared personal devastation – two unrelated but equally troubled existences that eventually dovetail into a shared mission.

He wants to reclaim the land he was promised in the wake of his military service, while she’s on a manhunt that’s spanned two continents. Separately, it seems as though neither has a hope in hell of getting what they want, especially when the so-called “civilized” frontier is anything but – especially as it pertains to a Native American like Whipp and a foreigner such as Lady Locke.

The English luxuriates in piecing together its plot through terse exchanges, overwrought monologues, and flashbacks spanning decades that slowly-but-surely tie everything together, in what does thankfully prove to be a satisfying whole by the end of the sixth and final installment. Upon first viewing, it almost feels as though Blick had designs on many more episodes than a mere half-dozen, which at times makes the occasional scene or two feel heavily overstuffed by virtue of having too much plot to squeeze into not enough airtime.

Narrative bugbears aside, one indisputable fact is that The English is stunning to look at. The Western genre is famed for its wide open vistas, lush landscapes, and sweeping shots of figures being painted as nothing but specks of dust on an endless plain. You get all of that and much more from the first to last frames of the entire show, with the cinematography, costuming, and production design all of impeccable quality.

The performances are equally stellar, with Blunt putting a fresh spin on a part she’s arguably played more than once before. Anyone familiar with the actress’ back catalogue knows she can do the whole “steely-eyed badass reckoning with past trauma” shtick in her sleep, but it’s the layers and complexities she brings to Cornelia that make her feel lived-in, fully-realized, and entirely justified within the context of her own reasoning to travel all the way from England to America to settle a score.

Similarly, Spencer could have easily fallen into the trap marked “stoic glorified sidekick”, but the actor delivers what’s comfortably the best work of his career as Eli. Sure, he is stoic to a certain extent as should be expected from a soldier forced to murder indigenous people under orders that ended up being denied the one thing he was promised for undertaking despicable acts, but it’s gestures, glances, and expressions that help fill in the gaps and give a real understanding of who he really is, why he’s done the things that he’s done, and the lengths he’s willing to go to in order to make it right.

There are several recognizable faces dotted throughout The English, from the malevolent Ciaran Hinds to the morbidly indignant Toby Jones, but the best of the bunch are Stephen Rea’s dogged, determined, and unwilling to consider accepting anyone else’s given f*cks as legal tender Sheriff Robert Marshall, along with Rafe Spall’s scenery-chewing nightmare come to life David Melmont. Digging too deep into the motivations of either constitutes spoilers, but rest assured they each give it their all and then some.

Twists, turns, and revelations unfold at a clip that really should have been a little quicker, though, and you may be able to call several of the would-be “surprises” very early on, but that doesn’t necessarily make The English any less of an experience. It’s not quite a rootin’ tooting’ rampage of revenge given the intimate interpersonal dynamics that permeate the entire thing, but nor is it a po-faced drama about harrowing subject matter as displayed through a smattering of eardrum-shattering action beats where you can almost feel the bullets tearing through the screen, even if Blick regularly struggles to find the perfect balance between the two.

Calling it solid-if-unspectacular feels like a disservice on one hand, but on the other, there are several noticeable intangibles missing from The English that would have comfortably elevated it to greatness. Westerns aren’t an easy sell as epic-sized streaming originals in an age where big budget sci-fi, fantasy, and superhero stories dominate the cultural conversation, but there’s a lot to like about Blick’s leisurely approach to putting his own bespoke and thematically resonant spin on what used to reign as Hollywood’s most popular and beloved genre bar none.

Review: 'The English' sends Emily Blunt out west seeking revenge, but gets a little lost along the way

'The English' is stunning to look at and a phenomenal showcase for its ensemble cast, but the six-episode series is a little too leisurely in its pacing to make the revenge-driven Western as riveting as it should be.