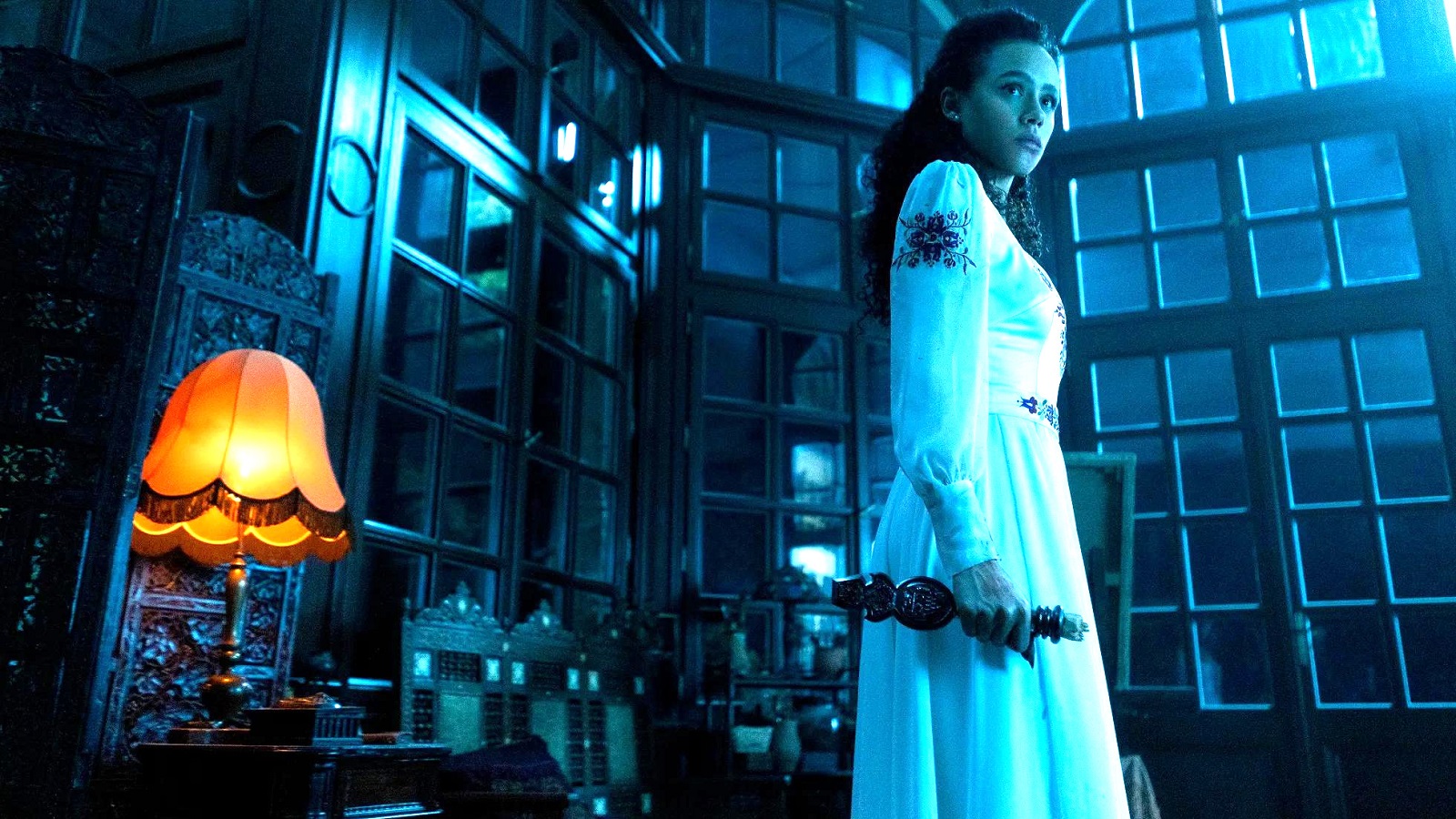 via Sony
Review of: Review: 'The Invitation' makes an admirable stab at reinventing a classic

'The Invitation' aims high, and while it's regularly impressive on a visual and aesthetic level, the storytelling lets the Gothic horror down in the end.

Perhaps the single biggest problem with The Invitation is that the marketing has essentially spoiled almost all of the major revelations contained within. While you can understand why Sony would want to underline to prospective paying audiences that this is a vampire movie that puts a fresh, modernized spin on the Dracula mythos, going in completely cold would arguably make for a much better and ultimately more satisfying viewing experience.

Nathalie Emmanuel heads up the cast as Evie, struggling to find her place in the world and enduring a lonely existence following the death of her mother. With no known relatives, she takes an online DNA test, and discovers that she’s got an exceedingly wealthy family living over in England, who are also suspiciously keen for her to attend an upcoming wedding at their palatial estate.

As mentioned previously, going in without knowing that The Invitation is a vampire flick would have enhanced the drip-feed of revelations that punctuate the first and second acts, but director Jessica M. Thompson admitted that she wasn’t in control of how the project was sold to the masses. That doesn’t mean the story isn’t without merit if you already know the ins and outs, with Emmanuel delivering a stellar central performance that’s grounded, relatable, and always real, even as the situation surrounding her grows increasingly supernatural, and more than a little camp.

That’s not a bad thing, though, and it’s clear that the creative team are all huge fans of Bram Stoker’s bloodsucking touchstone. Whether it’s in the names of certain characters, the production design, atmospheric cinematography, musical interludes, or background Easter Eggs, it won’t take the more discerning fan too long to figure out what’s really going on, even if they haven’t paid heed to the various trailers and TV spots to have given the game away ahead of time.

The broadest way to describe The Invitation is somewhere between Get Out and Ready or Not, albeit with a PG-13 rating and added fangs. Evie heads out of her comfort zone and straight into the realm of suspiciously polite, eccentric white folks who are very clearly harboring dark and dangerous secrets, before the gonzo horror aspect of the movie kicks in when a planned wedding at an isolated family home goes wrong in spectacular fashion. Unfortunately, a lack of genuine frights and occasionally leaden pacing prevent Thompson’s feature from reaching the heights of either of those acclaimed exercises in contained terror.

Thomas Doherty heads up the on-the-nose nomenclature club as Walter DeVille, the handsome and charismatic force who exudes magnetism from the second he appears onscreen. Of course, you’ll know exactly who he is fairly early on, but that doesn’t make his smarmy, charming spin on an archetypal figure any less engaging, while it’s refreshing to see you-know-who played as an outright misogynistic presence who views himself as having dominion over all of his prospective brides, as opposed to a snake oil salesman who needs only to use his words to entice those around him to his way of thinking.

Everyone involved behind the camera has put forward stellar work, though, and The Invitation is a real labor of love that merits a rewatch for purely aesthetic value, but the screenplay (credited to Blair Butler and director Thompson) could have used some additional refinement. As our protagonist, Evie is supposed to be a step or two behind the residents of New Carfax Abbey, but any halfway decent horror hero should never be allowed to fall as far behind the viewer as she regularly does, which often robs the narrative beats of any real stakes and tension when they’ve been signposted long beforehand.

Predictable subversion may sound like an oxymoronic turn of phrase, but that’s essentially The Invitation in a nutshell. It’s a vampire film, so there are certain beats that need to be hit as a requirement of the subgenre, and Thompson and her team at least try to paint them in a different shade of light than we’ve become used to. However, it never quite manages to hit that sweet spot that delivers the best of both worlds, so there are very few surprises or shocks contained within.

By the time the third act rolls around, there’s not a great deal of gas left in The Invitation‘s tank. As obligated by the rules of horror, our intrepid heroine must fight back against those who threaten to force her into a life of subservience, but once again the decision is made to utilize terrible-looking CGI fire as a focal point of a climactic showdown (making it today’s second new release to do so), something that’s particularly egregious when the production design and practical effects are among the high points of everything that came before.

In the end, Thompson has made an admirable attempt at reinventing a classic through a modern, timely, and socially-conscious lens, but The Invitation is also an example of just how difficult it is to successfully spin one of the most famous tales in the history of pop culture in a way that’s new and exciting enough to sustain almost two hours of cinema.

Review: 'The Invitation' makes an admirable stab at reinventing a classic

'The Invitation' aims high, and while it's regularly impressive on a visual and aesthetic level, the storytelling lets the Gothic horror down in the end.