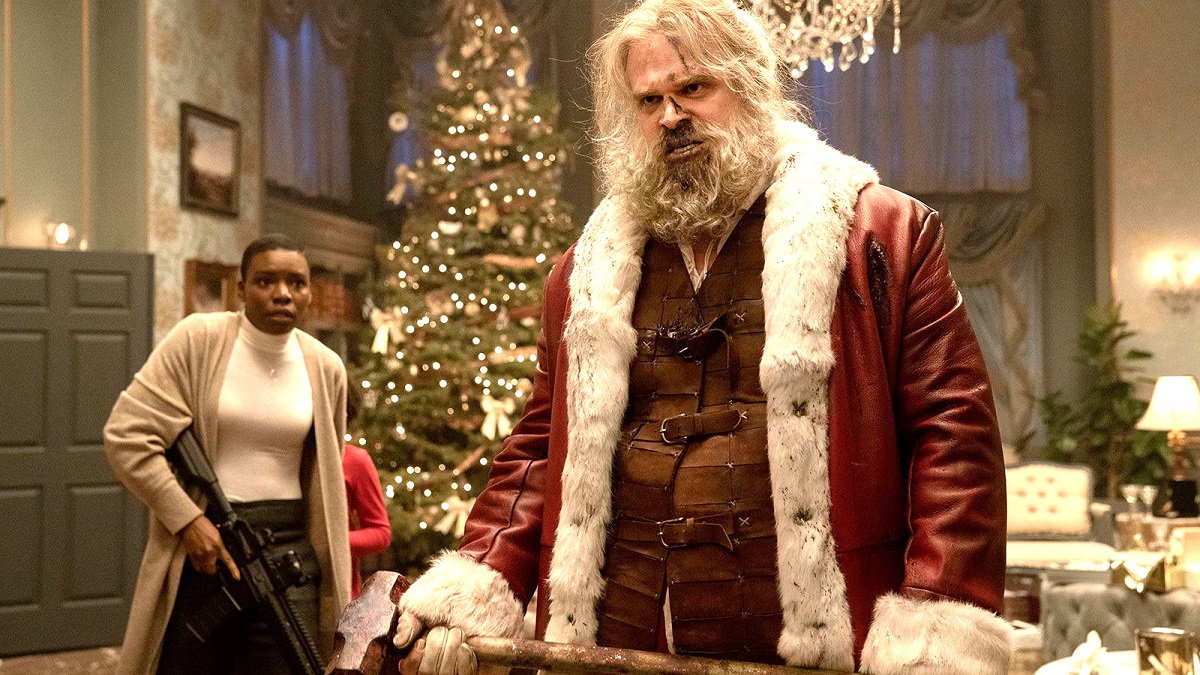 Based on both its premise and the creative talent involved, Violent Night comes to theaters bearing a certain set of expectations. The good news is that it meets them for the most part, with the R-rated festive actioner delivering all of the brutal violence and holiday cheer you could want. On the other side of the coin, it both gleefully embraces its outlandish premise, while still failing to maximize it to the fullest.

Obviously, nobody is expecting an awards season contender or a universally-acclaimed modern masterpiece from a $20 million genre film that hinges on Santa Claus beating the ever-loving sh*t out of disposable goons in what’s essentially been marketed as Die Hard meets Home Alone (which is something the script is keen to remind you of on numerous occasions).

However, despite several bone-crunching set pieces and a phenomenally grizzled central performance from David Harbour, Violent Night always feels as though it’s only a couple of minor tweaks away from greatness. As it stands, though, you can guarantee it’s going to become a regular staple of the annual calendar for those actively seeking to avoid cloying sentimentality in favor of yuletide tales with a significantly harder edge.

As mentioned previously, action junkies have a certain picture in their heads of what the film should be, which is fair enough when we’re talking about a high concept slab of hardcore holiday fare directed by Tommy Wirkola, who knows a thing or two about blood-soaked snow and ludicrous fantasies having previously helmed Dead Snow and Hansel & Gretel: Witch Hunters.

Then there’s esteemed production company 87North, famed for the likes of the John Wick franchise, Bob Odenkirk’s Nobody, and this summer’s Bullet Train. Meanwhile, Harbour climbed higher up the industry ladder than ever before by weaponizing his dad bod in Stranger Things and the Marvel Cinematic Universe’s Black Widow, with Violent Night succeeding in living up to the expectations that come to such an assemblage of names on either side of the camera.

Again, as promised, the basic setup and execution is bespoke fan service for those who like their Christmas flicks to be a little rougher around the edges than usual. Beverly D’Angelo’s Gertrude Lightstone hosts her family for their annual get-together, except this time John Leguizamo and his cabal of code-named hired guns hijack the festivities to take the family hostage and demand a $300 million bounty.

Harbour’s booze-soaked Santa ends up becoming trapped inside the clan’s palatial mansion when he runs out of Christmas magic (don’t ask, even he doesn’t know how it works as he admits several times throughout) and his reindeer fly off. Casting the spirit of the season aside in favor of any improvised weaponry he can lay his hands on, not-so-jolly old Saint Nick sets about rescuing the hostages with the help of the endearing Leah Brady’s precocious Trudy.

There are some interesting tweaks made to the established Santa lore, but they’re never explored in enough detail to make their introductions worthwhile. We discover that Harbour’s heavily-tattooed gift-giver is a Nordic warrior that’s thousands of years old who used to terrorize the ancient world with a trusty hammer named Skullcrusher. In microcosm, that’s fascinating stuff, but in practice it becomes little more than a way to shoehorn in a redemption arc of sorts while also handily explaining why he’s such a latent badass.

The rest of the characters are about as one-note as you’d expect, not that they’re particularly important in the grand scheme of things. Alex Hassell’s Jason wants to reconnect with his ex-wife to give Trudy her ideal Christmas present, but he’s got an ulterior motive that reeks of a plot device. Alexis Louder is solid as former spouse Linda, but having seen her steal the thunder away from veterans Gerard Butler and Frank Grillo in last year’s Copshop, it’s a crying shame she doesn’t get more time to shine in the action stakes.

Leguizamo even gets a lengthy backstory explaining why he hates Christmas so much, but it’s more a means to justify his highly specific actions and active disdain for the most wonderful time of year than a method of adding shades to a one-note sneering antagonist who finds himself continuously trying to convince himself and others that there’s no way the real Santa Claus is running around dropping bodies in his wake.

Of course, depth and nuance are not the order of the day, and Violent Night unsurprisingly sings loudest when it dispenses with family drama and paper-thin baddies in favor of watching Harbour decimate the opposition. Socks full of pool balls, sledgehammers, ice skates, tree decorations, and plenty more besides are used as implements of destruction, and you can’t help but crack a grin seeing the leading man go to town on anyone foolish enough to stand in his way.

Excessively violent, laced with a thick vein of jet-black humor, bolstered by a formidable turn from Harbour, and packed to the rafters with hard-hitting scraps, Violent Night knows exactly what it wants to be, but it doesn’t really try to be anything else. That’s not entirely a bad thing, but when “great” was a ceiling well within reach, “pretty damned entertaining” feels like a frustratingly low bar to clear.

Review: 'Violent Night' delivers exactly what was promised, but not much else

'Violent Night' delivers everything that was promised, and it's destined to find long-lasting life as a cult classic, but there's barely anything of note beyond the superficial.