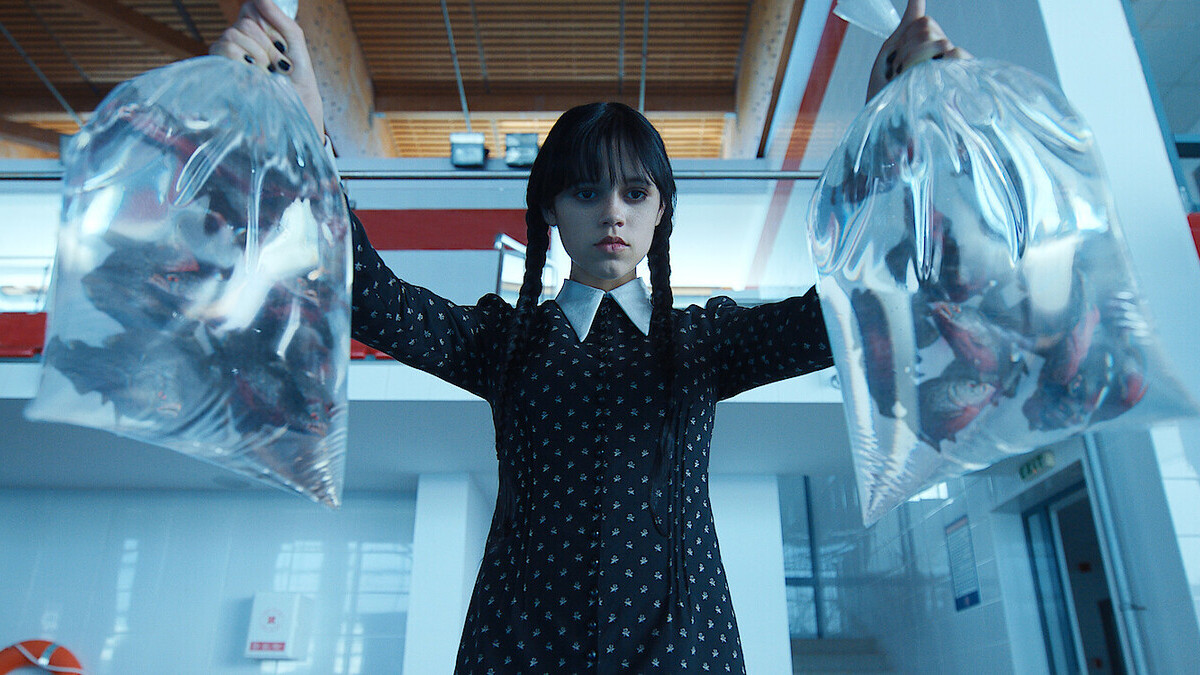 Harking back to the heyday of Barry Sonnenfeld, Raul Julia and Anjelica Huston when The Addams Family franchise was box office gold, Wednesday has hit Netflix bearing Tim Burton’s seal of approval.

Co-created by Alfred Gough and Miles Millar of Smallville fame, it tells the tale of Wednesday Addams, who narrowly avoids prison after attempted murder. In a comedically bleak opening five minutes, Wednesday (Jenna Ortega) is introduced through an internal monologue, while her trademark demeanor parts high school corridors like Moses during The Ten Commandments.

Having rescued her brother Pugsley (Isaac Ordonez) from humiliation by swiftly dispatching the swim team, she soon finds herself at a specialist boarding school. Accompanied on the ride by her mother Morticia (Catherine Zeta-Jones) and father Gomez (Luis Guzman), this updated interpretation feels refreshing – if not altogether original.

From the opening frame, Wednesday maintains a perfect balance between gothic theatricality and jet-black comedy drama. Much of that succeeds because of Ortega, who seems to have mastered the deadpan delivery and brooding intellectual superiority that defines the character. Brandishing her contempt for everything like a weapon against the world, Wednesday must come to terms with life within the walls of Nevermore, where Principal Larissa Weems (Gwendoline Christie) holds court.

Introduced to her new roommate Enid Sinclair (Emma Myers), who personifies everything which this Addams family member is repulsed by, Wednesday literally draws a line in the first of many visual flourishes which give this series an edge. What follows is a whistle-stop tour of this Hogwarts wannabe for vampires, werewolves, gorgons and sirens – giving audiences an orientation alongside Nevermore’s newest addition.

With rivalries established early on between Bianca (Joy Sunday) and Wednesday, as well as a potential crush on local barista Tyler (Hunter Doohan), the show is in danger of becoming just another high school melodrama. What ultimately saves it, aside from Ortega in the title role, is an understated adherence to gothic horror.

What starts out as being intrinsic to re-establishing The Addams Family identity for a new generation, soon starts to push the boundaries of its rating. Lifting liberally from the Harry Potter treasure trove of literary inspiration, Wednesday soon has its own high school competition which harks back to the Tri-Wizard cup from Goblet of Fire. Architecturally, Nevermore also resembles Hogwarts, especially when it comes to that central courtyard where students consistently gather.

It also has underhanded people in positions of power, vindictively pulling strings to influence the situation, just as certain characters did in Order of the Phoenix. However, irrespective of the similarities between that global phenomenon and this Netflix spinoff, there is no denying that Wednesday proves to be an engaging gothic dramedy.

Throughout its opening episodes there are subtle Easter eggs which either pay homage to The Addams Family lore, or in certain cases work theme tune lyrics into lines of dialogue. As the mysterious Weems, Gwendoline Christie is exceptional, skating a fine line between benevolent head mistress and manipulative Svengali.

Likewise, Riki Lindhome (Duncanville) puts in a solid turn as psychiatrist Doctor Valerie Kinbott, who turns out to be more than a compassionate presence for Wednesday to ignore during court approved therapy sessions. That this show also disregards the conventions of high school drama after some world-building episodes is commendable, as Wednesday morphs into an unsettling murder mystery – with a pint-sized Addams front and center.

From there, it uses sporadic visions to pull in various puzzle pieces, which link together in a cohesive whole – all while never losing sight of who the series is really centered on. A fact which should hopefully give audiences some reassurance going in, considering that not every critical eye has been kind to this latest expansion of The Addams Family franchise.

With some truly slick production design from former art director Mark Scruton (Gravity), this world feels fully-formed and audaciously realized in the smallest detail. There is a rich sense of history woven into the fabric of Nevermore, which allows Wednesday to live and breathe. A fact which goes a long way to explaining why Christina Ricci agreed to dive in as Marilyn Thornhill – lecturer in the art of keeping carnivorous plants.

The actress might be concealed behind glasses with a vibrant bob of red hair cloaking her distinctive features, but there is no denying the importance of her presence onscreen opposite Ortega. Fans will see this a passing of the torch between generations, as Wednesday finally steps out from the shadows of Morticia and Gomez to establish her own identity.

Jenna Ortega finally allows Wednesday to step out from behind other Addams Family members in an engaging reinvention from executive producer Tim Burton.