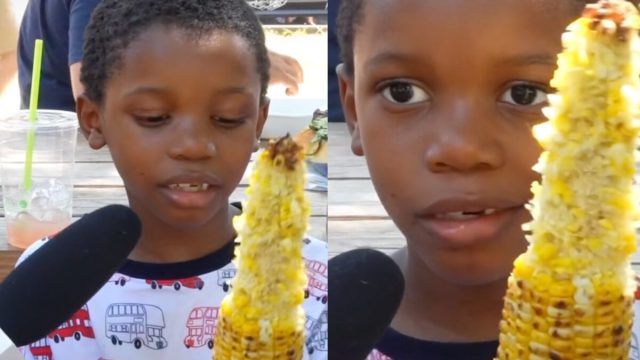 TikTok’s latest obsession is a far cry from the thirst traps and dance trends of the past, instead zeroing in on a thoroughly innocuous subject: corn.

Corn is taking over the video-sharing platform, flooding “for you” pages, and getting a simple, but catchy, tune stuck in everyone’s heads. And it all started with a charming interview.

In a video first uploaded in early August, viewers got their first glimpse at the eager young boy who’s made corn on the cob an overnight sensation. The initial video shows an interviewer ask the boy about things that he likes, and is greeted by a gripping homage to corn. The video has since gone starkly viral, collecting more than 700,000 views and 130,000 likes, and quickly branched off into its own dedicated trend. One remix and thousands of stitches later, the video persists as one of TikTok’s current favorites.

What is the original corn video?

The corn video that prompted TikTok’s latest trend was uploaded by user @recesstherapy on Aug. 4. It serves as a replacement for the actual original, posted sometime earlier, which had its sound mysteriously removed. That left people to lean on the early August video for all their corn-loving needs.

The video features a young boy with a girthy corn on the cob in hand. In response to a question posed by the interviewer, the boy proceeds to enthuse about all things corn. A few lines in particular stand out, as the boy notes that he “can’t imagine a more beautiful thing” than corn, and eagerly shouts “it’s corn!”

Within a few weeks, the original sound had spread to all corners of TikTok, and was in the process of getting a remix. By Aug. 18, user @schmoyoho had released a flawless remix of the viral sound, featuring plenty of corn love and several satisfying crunches as the young corn enthusiast takes bites of his buttery treat.

The remix was all the internet needed to make the corn sound into a viral sensation. The song, paired with the viral sound, soon prompted a wave of accompanying videos, all of which celebrate the persisting dominance of TikTok’s new favorite vegetable.

Within days, corn content was absolutely flooding TikTok. Even now, closing in on a month after the initial clip hit the platform, TikTok remains entrenched in fresh, crunchy corn videos. Many people started by simply stitching the original audio, or the remixed song, to showcase their reactions to the charming clips, but soon the trend branched off into new territory.

The corn song, titled “Corn but it becomes a song and unites world,” has already been used in nearly 250,000 videos, and more join the trend every day. It currently accompanies videos of nearly all forms, as people use it to tease their animals, paint their walls, and show off their latest artistic endeavors.

More than anything, however, TikTokers are leaning on the sound to accompany their strangest corn-related video ideas. Anyone interested in this hotdog-corn crossover abomination? It’s strange, but honestly has solid potential.

Corn is the name of the game on TikTok at the moment, so pretty much any corn-inspired videos are destined for virality.

As it turns out, some creators were sporting corn obsessions long before the viral sound took over TikTok.

One of the main things the corn trend has inspired, it seems, is recipes. The corn sound’s TikTok page is flooded with fresh, corn-based recipes, and a number of them look genuinely delicious.

Or these… buttery corn cups?

The corn song is proving to be surprisingly versatile, as people find pretty much any excuse to incorporate it into their content. So long as the trend persists on TikTok, it all but guarantees that corn will have a dominating presence in all of our lives.