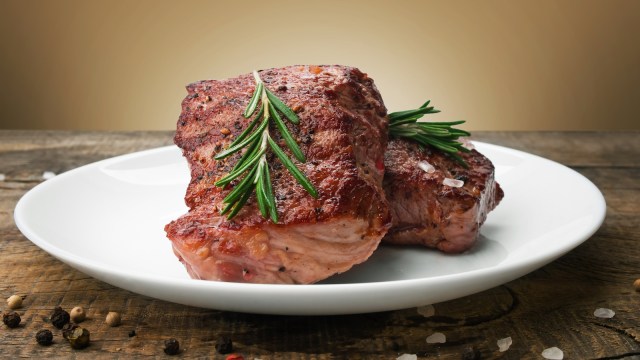 The wonders of modern science never cease. The latest potential game-changer? A steak 3D-printed from plant material that claims to mimic the real thing more than anything before it. Fake meat is obviously a good idea, but what does the steak taste like? One intrepid reporter decided to find out.

Sophie Morris is a British freelance journalist who covers food (among other topics) at The i Newspaper, and she decided to give the 3D-printed steak a try. It’s from an Israeli company called Redefine Meat and its creators don’t like it when you call it fake, according to Redefine CEO Eshchar Ben-Shitrit.

“It’s not fake meat, but a new way to create meat – without the huge challenges of doing so within an animal body.”

So how does it taste? Well, it’s chewy apparently.

“What strikes me first about the steak is the reassuringly chewy texture, an effect that most meat-substitute manufacturers have struggled to replicate and often try to disguise with heavy spicing. This, however, has satisfying heft and a complex structure, giving it a properly meaty mouthfeel and demanding a decent set of teeth.”

Looks like you need a strong jaw to handle this bad boy. The appearance of the steak, however, is what gives it away, Morris explains.

“The slices look cut from something more like meatloaf. Where real flank is distinctive because of the visible graining in the meat, this version doesn’t quite hit the target. The grain looks too uniform, almost pixelated, giving away its origins as a computer-programmed product.”

Other plus signs include “beef notes” that last a while after you swallow it, as opposed to some other lab-made meats that “often leave unrecognizable aftertastes.” It’s filling but not stuffing too, she said.

Ben-Shitrit says he calls his product “New-Meat,” with plans to have cuts for every part of the cow. Redefine Meat is only available in restaurants right now but there’s a trial going on for customers in Israel. There’s another meatless meat product called Juicy Marbles that attempts to recreate a filet mignon and calls it “the pinnacle of tenderness.”

Morris tried that as well and said it was an “almost-zero effort” to cook it and that it has a “generous but mellow beef flavor.” There’s a new era for fake meat products, Morris said, and even though they’re expensive right now as the product becomes more and more common prices should come down.

There’s a lot of ambition in the sector, as Ben-Shitrit said he has aspirations of making Redefine the biggest meat company in the world.