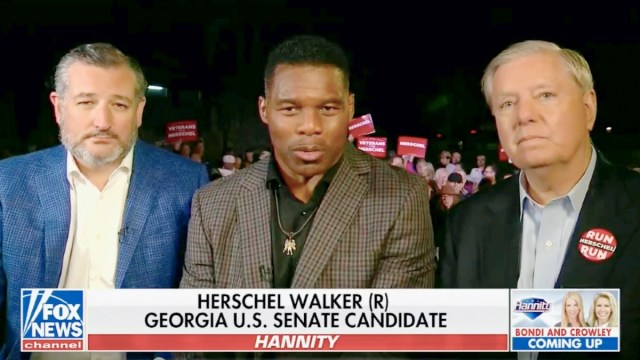 With the Georgia Senate race heading to a runoff election next month — because, unlike Michael Myers, the midterms will never die — republican candidate Herschel Walker is campaigning with all cylinders firing. But unfortunately, even the help of Sen. Ted Cruz and Sen. Lindsey Graham couldn’t keep Trump’s pick from making a gaffe live on Fox News.

Flanked by the two senators, Walker made his case as to why the race is crucial. “Well, first of all, this election is about more than Herschel Walker,” he said, as Cruz nodded super seriously. “This erection is about the people.”

We get it! Words are hard! However, the timing of Walker’s slip-up couldn’t be more inopportune, as it coincided with the second woman who accused him of pressuring her into having an abortion coming forward with additional evidence supporting her claims.

During a press conference in Los Angeles on Tuesday, the Jane Doe’s high-profile celebrity lawyer Gloria Allred presented a bounty of new materials, including a voicemail recording in which Walker referred to himself as her “stud farm calling, you big sex puppy you.” Additionally, Allred read a letter purportedly written by Walker to the woman’s parents, which read: “I do love your daughter and I’m not out to hurt her. She has been a strong backbone for me through all of this.”

Say what you will about the man, but he does evidently know a thing or two about erections.

At any rate, as the above clip went viral overnight, people couldn’t grasp the early holiday gift that the former NFL running back dropped right into our laps.

“The fact that Herschel Walker doesn’t know the difference between an election and an erection is more proof he doesn’t belong in the Senate, and could explain why he’s not sure how many kids he has,” tweeted the omnipresent Brooklyn Dad account — pretty much summing up the joke that the entire rest of Twitter was making as of Wednesday morning.

Oh, and there were plenty of jokes, as, again, Walker’s erection was what got him into this mess in the first place (the infidelity and abortion pressuring claims, obviously, not his candidacy itself).

Well here it is. It’s a Change Erection, Herschel is flaccid at the polls, and he now is a schlong-shot at best. https://t.co/EPp0oyzwDh

If nothing else, perhaps that could be Walker’s next career move if and when he loses the runoff ere—we mean, election. Less talking is better!