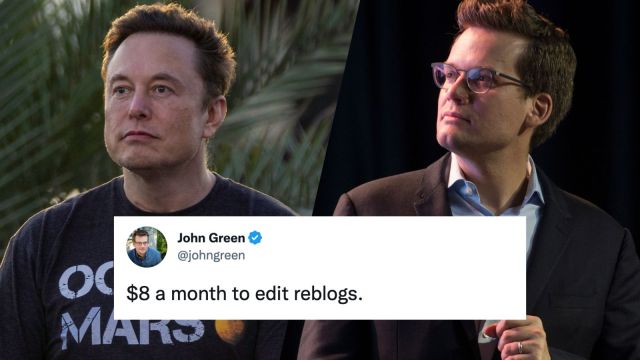 YouTuber and author John Green has also joined in on the #RoastElonMuskParty, except he’s using his own experience as roast fodder. The author explained Twitter’s current situation using an old Tumblr incident to help those understand just how dumb the new changes are.

Green posted a tweet, comparing Elon Musk‘s purchase of Twitter to a hypothetical of him buying Tumblr in 2014. He also added that one of the changes he’d do as this hypothetical new CEO of Tumblr would be to charge users $8 a month to edit reblogs. Language of a forgotten era!

For those out of the loop, Tumblr users essentially bullied Green on the platform back in 2014 when the site allowed users to edit one another’s posts. According to The Focus, users would change Green’s posts with the intention of misquoting the author, kicking off with one that made the post seem sexually suggestive.

Green ended up getting tired of his posts being altered to such a level that he left the platform, finally finding his piece. The bullying incident led Tumblr to remove the ability to edit other people’s posts.

Fans were doing metaphorical spit-takes witnessing their favorite content creator relive one of the most high-profile incidents on fan bullying ever. That being said… well played.

In the wake of Muskgate, Tumblr announced that it will be lifting its anti-NSFW rules. Following the shock announcement, people are predicting that Twitter will fall, the same way Tumblr did in 2018.

That being said, Tumblr’s already experiencing a resurgence as scared tweeters desperately flock for a new platform. Even Ryan Reynolds has opened his official Tumblr account. While it remains to be seen whether the Tumblrenaissance is legit, just be glad no one is charging you to edit your posts.