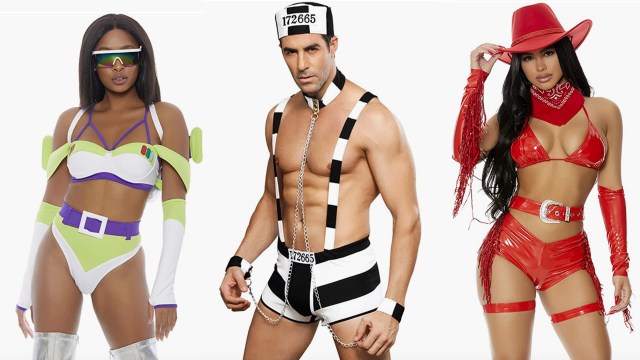 It’s that time of year again, as leaves start to change color, and those who celebrate Halloween turn their minds to what their official costume should be this year.

Fans of the year’s spookiest holiday delight in the opportunity to transform for one evening a year, gracing their fellow revelers with the fruits of sometimes months of labor. Not everyone takes the holiday so seriously, of course, instead leaning on the wealth of pre-made Halloween costumes that litter store shelves starting in early September.

Many of these costumes celebrate the year’s biggest trends via a variety of interpretations, but the most popular is undeniably the sexy costume. In the immortal words of one Cady Heron, “In the real world, Halloween is when kids dress up in costumes and beg for candy. In Girl World, Halloween is the one day a year when a girl can dress up like a total slut and no other girls can say anything else about it.” These words have been proven correct time and again, as girls — and plenty of boys — take every opportunity to flaunt as much skin as possible as October turns to November.

We might prefer a full set of Dragonscale armor to a racy feline, but not all sexy costumes are bad. Some can be fun, and even accurate (see the unceasing popularity of a certain Leia getup), but others are undeniably inadvisable. We’re not recommending you don Leia’s metal bikini either, but we’d definitely advise against some of this year’s top saucy suits.

So, without further ado, here’s a look at 2022’s most criminally unacceptable sexy Halloween costumes. Don’t let anyone catch you trick or treating in these.

Why go as a pop culture figure or recreated television character when you can enjoy Halloween dressed up as a culinary staple?

There’s nothing more inventive than dressing up in as little as possible, tossing a ten-gallon hat on your head, and calling yourself a cowgirl.

We’re all for horror movies, especially around Halloween time, but do we really need a sexy version of a murderous doll?

This one is just ridiculous. Unless you’re an actual teenager looking to get some cringe laughs, steer far clear of this get-up. It’s also mildly offensive, as a bonus.

You likely thought of a different televised Dexter when you saw that title, but no. This costume mimics the look of a cartoon character rather than the live-action killer, and should never have seen the light of day.

There are some characters that should be off limits when it comes to transforming them into the scantily-clad version, and Star Wars‘ Darth Vader is very much one of them.

In honor of this year’s Lightyear, you might be considering a minimal Buzz Lightyear costume for your Halloween getup. Considering the character’s intended audience, however, you should probably rethink that decision.

There’s no shortage of “inmates” running around come Halloween time, but some prison-themed costumes are more acceptable than others.

This one seems self-explanatory, but just in case: let’s not sexualize children, shall we?

The most criminally overused Halloween costume of all time remains the Native American outfit, and it’s getting supremely old. It’s 2022, folks. Don’t walk out of your house in an offensive getup like this one. It’s honestly staggering that Amazon even has this one for sale when it should be making a task of removing every vestige of this insulting costume from the web, post haste.