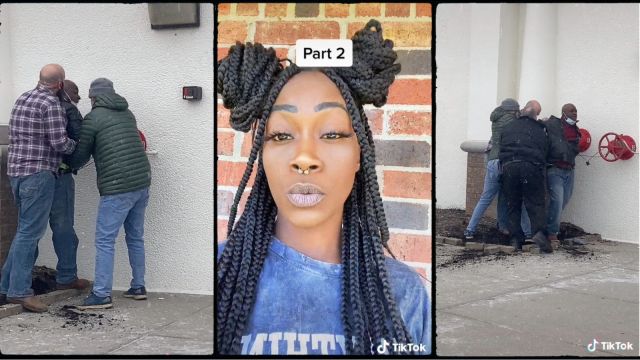 The justice system works hard, but Tik Tok influencers work harder. It all started when a passerby noticed a commotion near her local Macy’s, and decided to videotape the altercation between two security guards assaulting an alleged shoplifter. The videos shared by Maraya went viral, showing exactly how bizarre and disturbing this entire situation truly was.

On Aug. 31, Maraya, who is known on TikTok by the name marayamashae, posted a few videos depicting the situation she found herself in, explaining that as she was walking by Macy’s, she noticed a man screaming in despair while two security guards kicked and punched him. This altercation prompted the TikToker to start recording and quickly intervene, calling the police just a few moments earlier, now with video evidence.

The two security guards immediately jumped the gun and attacked the alleged shoplifter, without even checking any receipt for proof of purchase. However, once a police officer arrived on the scene, the alleged shoplifter was finally given the opportunity to share his receipts, showing that he legally purchased all of the products.

Maraya also shared that security employees are not legally allowed to touch or place their hands on an alleged shoplifter in any given situation. The TikToker has reported the entire situation to Macy’s.

The viral TikTok videos were flooded with reactions, with hundreds of comments completely outraged at the loss prevention employees’ actions, inciting a lawsuit.

That man can sue the store for this!! He needs a lawyer.

Loss prevention can’t even approach you out of the store

Thank you for being brave and standing up for that man.

Bravo on how well you filmed the incident. Those guys are in a lot of trouble no matter who they are and they know it.

This isn’t the first time TikTok influencers have brought light to situations such as this. In early September, a social media campaign on TikTok sought justice for Daisy de La O, who was violently murdered in February, by flooding the social media platform with pictures of the murderer.