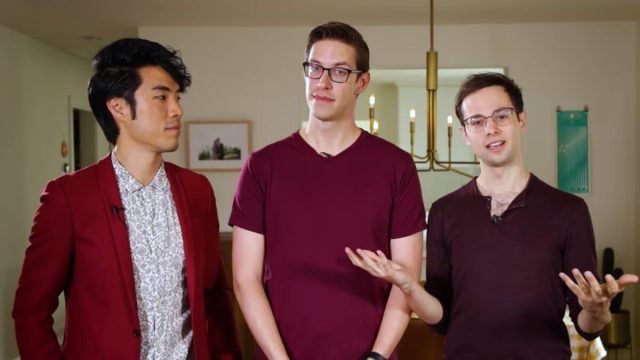 Controversy is swirling online this week after disappointing news broke about one of the most wholesome groups on the internet.

The Try Guys — a group of American YouTubers — have been charming their way across the web for a handful of years now. Their influence has been growing for awhile, as what started as silly bits intended for a small audience gradually grew into a much more established brand. Recent controversy surrounding one of their members is bringing the group to the forefront of conversations as fans struggle to accept that a member of the perpetually uplifting group was engaged in an extramarital affair. The backlash was swift and decisive, as fans dragged Ned Fulmer for creating an online identity around being a good man and a good husband only to turn around and cheat on his wife.

The subsequent conversation has elevated the Try Guys visibility immensely. What was once a rather niche group has since become a major talking point as people dissect the drama and discuss their opinions on the matter. A number of people who were previously unaware of the group are suddenly seeing their timelines drenched in Try Guys discourse, and they have questions.

Who are the Try Guys?

The Try Guys is a YouTube channel started by four former BuzzFeed employees: Keith Habersberger, Zach Kornfeld, Eugene Lee Yang, and Ned Fulmer. The foursome created the group while still employed by BuzzFeed, after delivering their very first Try Guys-style video. This launched a brand, and eventually led the group to leave BuzzFeed and create their own dedicated YouTube channel.

The Try Guys channel debuted in 2018, and in the years since has become a staple of the site. The page currently boasts nearly 8 million subscribers, and in total the videos on the page have been viewed more than 2 billion times. The video that put them on the map released not long after their YouTube channel launched, and has since racked up more than 16 million views and 460,000 likes. The video sees the Guys trying out a labor simulator with hilarious results, and remains one of their most popular videos of all time.

The Try Guys’ shtick is straightforward and surprisingly entertaining. It simply sees the group of average dudes trying out a vast range of things, from mimicking their wives’ makeup to eating spicy noodles and wearing corsets. Many of the videos see them attempting traditionally feminine things, and often result in utter shock from the team as they realize how bad period pain is, and how uncomfortable high heels truly are.

Before his departure from the group, there were four main members of the Try Guys. Each of them boasts an impressive net worth, but none are worth quite as much as Fulmer, the man who’s recently been dragging their name through the mud. His departure from the team is all but certain to damage his financial status somewhat — as will the likely cancellation of he and his wife’s restoration show — but he’s got plenty to lose, at this point.

One of the most recognizable members of the Try Guys, Keith Habersberger is worth an impressive $200,000, according to the Biography. The 35-year-old is somehow worth the least of all the Try Guys team, despite his continued work in expanding the brand and branching out into new exploits. His name is on the rise in the culinary sphere, thanks to the recent launch of his dedicated hot sauce, and his work in merchandising has made a number of fans very happy.

Zach Kornfeld’s work outside of the Try Guys group has earned him a chunk of change beyond what several of his peers boast. He’s one of two members of the group that boast millionaire status, with a net worth of around $2 million. Some of this cash comes from the 32-year-old’s work with Try Guys, of course, but a good chunk of it also comes from his work as an actor, screenwriter, and businessman, according to Distractify.

Worth more than double Habersberger but less than half of Kornfeld, Eugene Lee Yang falls right in the middle of the Try Guys’ net worth. He’s inching ever closer to crossing that millionaire threshold, but has a few hundred thousand to make before he can officially claim the coved status. As it stands, the 36-year-old is worth around $700,000 according to Biography Mask, and his wealth is growing fast. He’s one of the most well-known members of the team, thanks to his frequent work as an LGBTQIA+ activist, and his work as an actor, author, comedian, and plenty more continues to reinforce his unique and delightful personal brand.

Of all the members of the Try Guy team, Ned Fulmer is easily worth the most. This will likely come as a huge disappointment to fans of the group, considering his recent fall from grace, but Fulmer’s got a cozy cushion to fall back on. He’s worth around $10 million, scores more than any of his Try Guy peers. The 35-year-old will likely see a ding to his income following the recent backlash, but it probably won’t be enough to ruin him. His wealth comes from a variety of sources outside of Try Guys, including the home restoration show he runs with his wife, Try DIY.

The Try Guys rarely make headlines — despite their large fanbase — because the group has largely been unproblematic and non-controversial. Until recently, that is. News recently broke of an affair between Ned Fulmer and a Try Guys employee, and the internet was quick to turn on Fulmer. He, perhaps more than any of the other Try Guys, built his brand on a kind, everyday man personality with his wife and kids at the core. News that he betrayed his family soured fans on the formerly-loved member of the team, and quickly saw the rest of the Try Guys distance themselves. Within a few days, he had officially departed the team, leaving them a member short and with a ding to their formerly-stellar reputation. None of the other Guys did anything wrong, of course, but Fulmer’s actions nonetheless damaged their persona of loveable, straightforward dudes with no messy controversy attached to them.

Thankfully, Fulmer’s departure should see the Try Guys’ reputation bounce back pretty quick. It’ll be strange to see the formerly four-man team tackle their typical content sans one member, but fans are pleased that they took immediate, decisive action. Their willingness to cut him from the team in light of his actions means a lot, and fans are already heaping praise on the remainder of the team. Their formula might change up a bit in the wake of Fulmer’s actions, but fans should see fresh Try Guy content hit YouTube within a few weeks, as the group works to erase Ned’s negative impact on their brand.