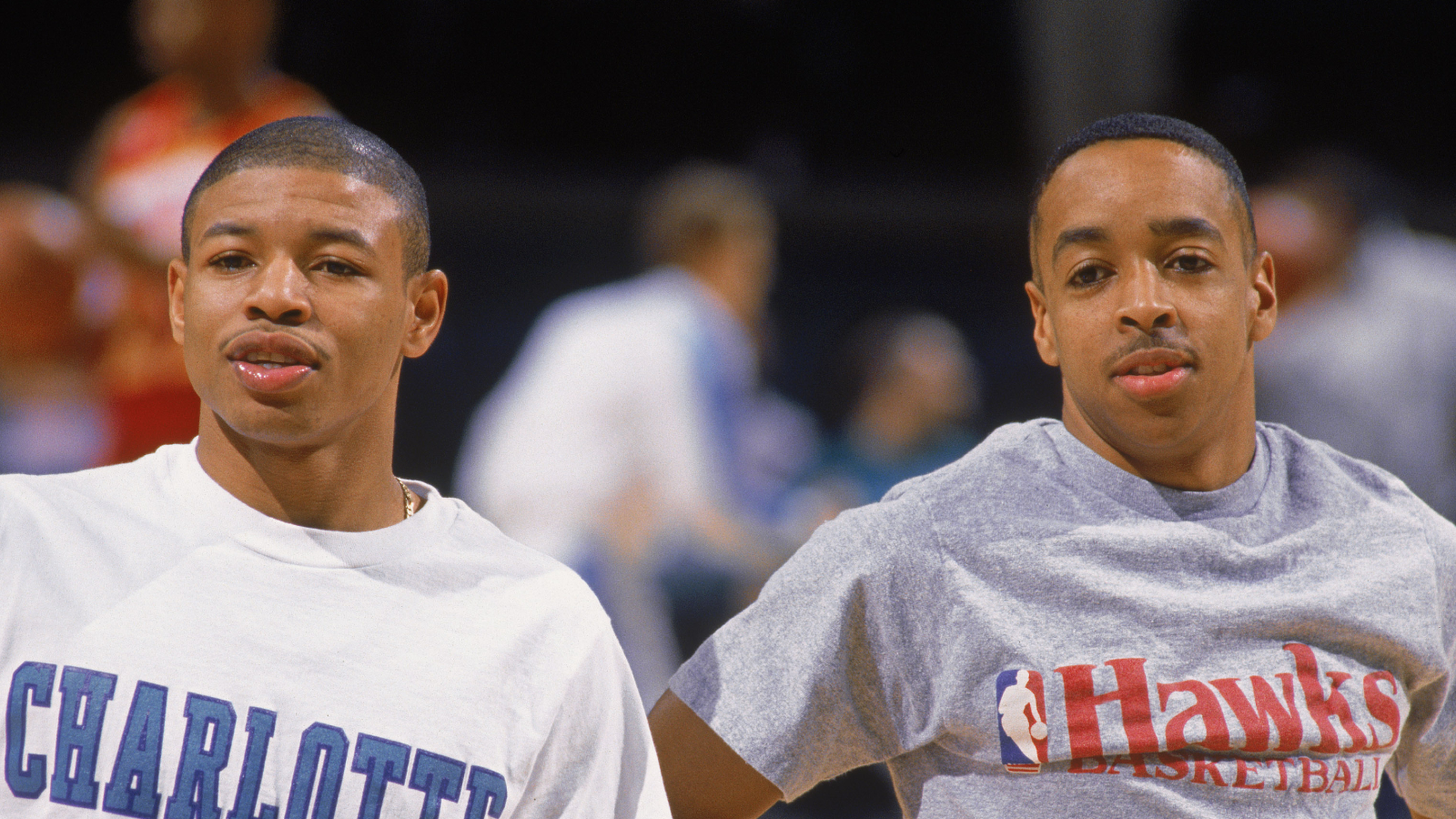 It might come as a little bit of a surprise, but there are a lot more players under 6 feet tall who have suited up in the NBA. One could argue that a substantially shorter player may have to work much harder than his non-height-challenged teammates. While most of those who take the court in the league are much, much taller than your average man, there are loads more who might have had below-average height, but way above-average skills.

The shortest player to ever play for an NBA squad is pretty well known, and with a spectacularly great name to boot.

Bogues, all of five feet, three inches, and just 136 pounds, is notoriously the shortest known player in NBA history.

At that short stature, short even by normal folks’ standards, much less professional basketball players, Bogues played 889 games across 14 seasons.

Actually, he played 15 total professional seasons, as his first pro campaign was with the now-defunct United States Basketball League, playing for the Rhode Island Gulls (not a great name) in 1987.

The now 57-year-old Bogues even played on the same squad as the second-tallest NBA player in history, Manute Bol.

His full name is actually Tyrone Curtis Bogues, so Muggsy is just a tremendous nickname and not his actual given name, but both his game, name, and stature stood out every time he was on the court.

Teams took Bogues seriously as a stout defender and a nimble and nifty point guard. He finished in the top 10 in steals three times and in the top seven in assists in six straight seasons, from 1989 to 1995, playing for the Toronto Raptors, Washington Bullets, Golden State Warriors, and most notably, the Charlotte Hornets.

He gets the nickname Muggsy from a character portrayed in early 1940s and ‘50s films known as “The Bowery Boys”, about a group of characters set in New York City.

At the time his playing career ended in 2001, Bogues was 12th on the all-time assists leaderboard and had the 13th best overall assists-to-turnovers ration in NBA history.

Even those who don’t follow the NBA likely know who Bogues is, either from his well-known standing as the league’s shortest-ever player, or maybe even more so for his role in the original Space Jam movie.

Playing 13 seasons and 652 games over the span of two stints in the NBA, Boykins was a bit of a journeyman with a solid set of skills.

Boykins also became the shortest player in league history to score 30 points when he did so in 2004 for the Denver Nuggets, notching 32 points. In three consecutive appearances in the postseason with Denver, Boykins averaged just a shade under 13 points, four assists, and one steal over 15 total playoff games.

He also spent a season playing abroad for a more lucrative contract, suiting up for Virtus Bologna of the Italian A League.

Hirsch you probably don’t know much about, if at all. He played one season, and just 13 games, for the Boston Celtics in the 1946-47 season.

We’re not sure that really qualifies for the list, but officially, he did suit up in the NBA.

Technically only two centimeters taller than Hirsch, it’s safe to say Webb might have made the biggest name for himself out of everyone on this list. He’s listed as both five feet, six inches and five feet, seven inches, but we’re going with the NBA.com listing here.

The high-flying Webb — who also contends for the coolest nickname on this list along with Muggsy — burst through the stratosphere and grabbed everyone’s attention when he won the NBA Slam Dunk contest in 1986.

Even better, Webb topped his teammate, Hall-of-Famer (and legendary dunker) Dominique Wilkins to take the dunking crown, held in Dallas that season, which happened to be Webb’s hometown.

From there, fame followed, as it usually did for dunk-champs back in the day. Webb’s face was everywhere for a moment as he starred in commercials for Coca-Cola, Chips Ahoy!, Hardee’s Hamburgers, Sunkist Oranges, Pony Shoes, and Church’s Fried Chicken, among others.

Webb also helped hoist up another Slam Dunk champ, as he trained the five foot, nine inch-tall Nate Robinson to a title in 2006. They remain the only NBA players under six feet to take the dunk championship.

The 58-year-old Webb currently holds the title of president of basketball operations for the NBA G League team, the Texas Legends, which is just outside of his birthplace of Dallas, in Frisco, Texas.

Over 814 career games and 12 seasons, Webb averaged just a hair under 10 points per game and tallied 5.3 assists, 1.1 steals, and even 2.1 rebounds, playing mostly for the Atlanta Hawks, but also for the Sacramento Kings, Minnesota Timberwolves, and Orlando Magic.

There are a handful of other NBA players that stand at five feet, seven inches, so without lining them all up it’s hard to know for sure who was taller.

Keith Jennings — Suited up 164 times for the Golden State Warriors.

Red Klotz — Another one who was gone in a flash, playing just 11 games total in the 1947-48 season, but for good reason, as he served during World War II.

Wataru Misaka — Notable for more than just his height, as Misaka was the first-ever non-Caucasian and the first-ever Asian player in the NBA, unfortunately he only appeared in three games.

Dino Martin — Another ‘40s player who didn’t stick around too long, just 92 games.

Willie Somerset — Got in eight games for the Baltimore Bullets in 1965-66.

Charlie Criss — Had a good run over eight seasons in the NBA and was even named the Continental Basketball Association MVP in 1976.

To top it all off, the ties here take us to a total of 24 players on our list, but three players in particular stand above the crowd.

A Hall-of-Fame player, he might be even better known for his time off the court following retirement as an eccentrically dressed color commentator for the Houston Rockets.

For sure, though, Murphy was one hell of a player. He is known as the shortest-ever player inducted into the Naismith Memorial Hall of Fame, and was the all-time leading scorer for the same Rockets when he retired in 1983, with the record standing for 11 years until it was broken by a fellow Hall-of-Famer, Hakeem Olajuwon.

The 74-year-old still holds the second spot for the highest free-throw percentage in one single season at 95.8 percent in 1980-81, and he helped Houston make it all the way to the NBA Finals that season, where they lost 4-2 to the Boston Celtics.

Another note, Murphy was also a national champion in baton twirling, winning the title in 1963, and even taking the title of Texas State Men’s Twirling champ during his playing career in 1977. He’s also had his share of off-the-court controversies.

The aforementioned second-shortest player to win an NBA Slam Dunk contest, he actually added to his place in history by winning the dunk contest two more times to become the league’s first-ever three-time slam dunk champ.

Robinson played for eight teams during his career, tallying 618 games, mostly for the New York Knicks. He also earned a pretty special distinction in his one season playing for the Chicago Bulls, as he became the fourth player to score at least 25 points and dish nine assists in a playoff game for the Bulls, joining legends Michael Jordan and Scottie Pippen, along with Derrick Rose.

You may recall that Robinson also went into boxing for one fight, losing in a knockout to Jake Paul in 2022.

Thomas is known for a few things by now. For one, yes, his stature and standing as the shortest active player in the NBA, but also for having his name resemble Hall of Fame guard Isiah Thomas.

The 33-year-old made a name for himself as a lightning-quick scorer for the Boston Celtics, earning two All-Star nods during his time and for playing through immense personal, emotional pain as well as physical pain, leading Boston to two playoff series wins just after learning of the tragic death of his sister in a car accident, and playing through a hip injury that eventually knocked him out of the Eastern Conference Finals. He averaged 23.3 points per game through 15 contests during that run while dishing out nearly seven assists per game.

That injury wound up changing the course of Thomas’s career, as he played through the injury and seemingly made it worse, to the point that he eventually needed surgery and had a hard time not only regaining his former All-Star form, but even staying on the court.

To make matters worse, even after he gutted through all that for Boston, then-general manager Danny Ainge traded Thomas away the following season, which did not sit well with many inside and outside the game.

Thomas has continued to persevere and play, trying to stick in the NBA once again, most recently playing for the Los Angeles Lakers, Dallas Mavericks, and Charlotte Hornets this season.

Even in a game where height seems to be the easy ticket in, there are plenty of legends who stood up to the challenge of making it into the NBA regardless of their size.