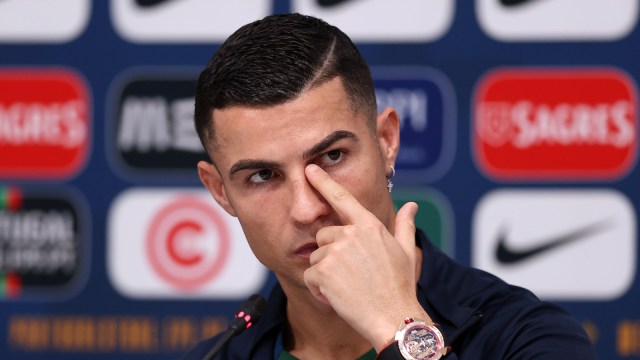 Just two days before playing in his fifth World Cup for Portugal, Cristiano Ronaldo and his club team Manchester United agreed to part ways. The sudden divorce, if you will, was triggered by many things, not the least of which was Ronaldo’s outspoken interview conducted by Piers Morgan where the football star slammed the Man U club, though Ronaldo being used mostly as a substitute also greatly contributed to the finality of his days at Old Trafford.

The controversy could derail Ronaldo in the most prestigious tournament in the world, though it could also help him clear his mind as the only team he plays for at the moment is his national Portuguese team, of which he is the captain. He’s played in more games for Portugal than any of his countrymen past or present, and it’s not even close. Appearing in 191 games, he’s easily scored more goals for Portugal than anyone else, sending his nation into momentary jubilation 117 times when the next closest goal-scorer for Portugal is Pauleta, his former teammate on the national squad, who netted 88 goals.

This could be it for Ronaldo. He even stated that he would immediately retire from the sport if Portugal wins the World Cup. However, Portugal winning the world’s most coveted trophy, though not impossible, is highly unlikely, which means that Ronaldo will be seeking to play somewhere on the club level amongst the most prestigious leagues in the world which are, for all intents and purposes, exclusive to Europe. Yet, things may not be so easy and this departure from Manchester United may prove the end of his career in regards to playing for an elite league.

It seemed as if Chelsea was interested in him over the summer, especially within transfer talks, even meeting with Ronaldo’s agent, but they have since dismissed the idea of bringing the superstar aboard.

No doubt there will now be, and have been, offers from lesser leagues where Ronaldo could shine but won’t be facing the best competition in the world. MLS is one of those of those options. The most likely choice, if he were to follow the money, would be the Kingdom of Saudi Arabia.

Here is a closer look at what are the three most likely teams that Ronaldo plays for next.

Ronaldo admitted during the Piers Morgan interview that a Saudi club recently offered him £350 million but that he turned it down. Of course, he was still with Man U until this morning, and now he’s likely forced to reconsider his options now that he has no club team. Ronaldo’s agent will likely revisit the offer after the World Cup especially since he will not have such an offer from any other team.

If he doesn’t sign with the Saudi club, which he did not name, then Ronaldo will likely take a significant pay cut. He’s 37, wants to play until he’s 40 (which will take him to 2025), and is coming off what is the worst experience of his career. he didn’t help his cause though. He refused to come on as a substitute against Tottenham last month, then left the pitch before the final whistle. Man U was paying him a salary of £500,000 a week, and that doesn’t include the tie-in bonuses. That kind of money is not available everywhere. It is, however, available in Saudi Arabia.

Paris Saint-Germain could step up considering they did express interest in Ronaldo earlier this year. However, they already have Lionel Messi and Neymar, not to mention French star Mbappe, so it seems unlikely that they would fish for Ronaldo. If they do, it would likely be because they could have a dream team-up with Ronaldo and Messi but it’s doubtful that it would be for the amount of money that Ronaldo is apparently looking for. Messi, however, might end up retiring at the end of the season when his contract is set to expire, making it perhaps a possibility that the team offers Ronaldo a contract to join them in the summer.

If they don’t and he instead takes offers outside of Europe, including the Saudi Arabian club, then this would take him out of the most celebrated annual tournament in the sport which is the UEFA Champions League, which decides the club champion of Europe. Ronaldo is the Champion’s League’s all-time leading scorer with 140 goals.

Yes, Ronaldo may actually play in the United States. He’s already naturally a star there anyway and Miami CF owner, David Beckham, already expressed interest in getting Ronaldo earlier this month, making it a real possibility. The details are interesting and somewhat promising.

There is almost no doubt that Beckham will now reach out to Ronaldo and discuss what it would take to bring the star to the States. Ronaldo could make a pretty penny in the U.S. but it will likely all come down to whether or not he is willing to let go of playing for the top clubs in Europe, which even MLS is not quite on par with. If there are no real options in Europe then Ronaldo will almost certainly consider a move to Major League Soccer.

However, all of this will be insignificant if Ronaldo gets what he really wants and that’s the FIFA World Cup Trophy.