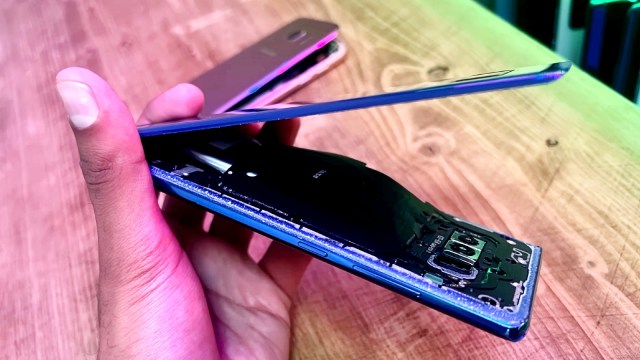 Getting swol is not only something that your typical gym rat strives to be, it also happens to be the fate of the batteries of many electronic devices these days. That can include everything from laptops, phones, and mp3 players to gaming consoles of various sizes, types, and brands. But is there a way to prevent his from happening in the first place?

One brand that is receiving the spotlight for this unfortunate trend lately is Samsung, with YouTuber Mrwhosetheboss (AKA Arun Rupesh Maini) even claiming the phenomenon is occurring disproportionately high amongst Samsung devices, as was pointed out on the technology blog site engadget. However, the article pointed out swollen batteries can happen to many different brands, not just Samsung.

Some have even claimed swollen batteries have been a fate met by newer devices, such as the circa-2020 Galaxy Fold Z, and laptops of various brands. IT specialist Gareth Belton has even said some of the swollen laptop batteries he’s come across were only three to five years old, and estimates about 10 percent of the laptops he repairs have swollen batteries, according to The Washington Post.

In fact, finding swollen batteries in electronic devices that make them look like a pistachio breaking out of its shell is such a common occurrence, there’s even a dedicated subreddit called r/spicypillows where Reddit users share their worst encounters in photos.

While both The Washington Post article and the r/spicypillows subreddit have cautioned that electronic device battery degradation — up to and including swelling — is basically an inevitability, there are some steps you can take to make your batteries last longer and not hulk out on you right away.

Don’t keep your device constantly plugged in or permanently unplugged

One thing multiple sources have cautioned is keeping your device at an appropriate charge level. That includes not keeping the device constantly plugged in nor keeping it permanently unplugged if it is a backup you rarely use. Both practices can contribute to battery degradation. As the engadget article pointed out:

“[Battery swelling is] more likely to happen if you leave a battery without charging or discharging for a long time, and many companies (such as Apple) recommend that you keep batteries at a roughly 50 percent charge if you won’t use a device for extended periods.”

“His advice: Once your gadget’s battery hits 100 percent, unplug it and use it as you normally would. Then, once you get down to the 10 to 20 percent range, charge it again.”

On a FAQ Reddit post that is pinned to the top of the r/spicypillows subreddit, it similarly cautions against keeping gadgets constantly on either 100 percent or 0 percent life and instead advises:

“Don’t leave your device plugged in all the time. Leaving your battery fully charged or fully discharged for long periods of time can damage them. If you’re storing a battery for longer than a couple weeks, try to store it at about 50% charge.”

High temperatures can contribute to supercharging — literally — your electronic device’s battery degradation and ultimately shorten its lifespan. The Washington Post pointed out that while laptops often have cooling fans to prevent this, phones can be easily overlooked on a sweltering day, especially if you keep it in your car. That’s why it is definitely a smart move to take your phone out of direct sunlight, or out from underneath the intensified heat coming through the glass of your car windshield, on a hot day.

Likewise, it’s also unwise to expose your electronic device to extreme cold, as the r/spicypillows FAQ page pointed out:

Use only high-quality chargers

Another sage piece of wisdom from the r/spicypillows FAQ post is to only use chargers that have been subjected to some kind of certification process to ensure their quality, as using budget-priced chargers could mess up your device battery’s lifespan. As it explains:

“Use only high-quality, certified chargers. Knock-off chargers may not be held to the standards of manufacturer chargers and may not be able to provide sufficient quality power to the device.”

Try not to let your device slam onto the ground

As with many things in life, gravity itself can be your arch-nemesis when it comes to keeping your electronic devices — and their batteries — in an optimum state for as long as possible. For that reason, it may just be worth it to invest in a sturdy phone or laptop case in case such mishaps occur. As The Washington Post article explained:

“Usually, if your laptop tumbles out of your hands, the first thing you would worry about is whether its screen is still in one piece. But Viswanathan says these kinds of tumbles could lead to situations where one part of the battery is getting more charged than others. That could lead to battery swelling, as well as some other less-than-pleasant outcomes.”

If you find yourself with a swollen battery in your device, it’s important to remain calm. As The Washington Post article explained, it doesn’t necessarily mean it is on the verge of exploding per se. However, it would probably be wise to stop using the battery immediately, do not charge it, store it in a fireproof container, and take it to a local battery recycling facility, if possible. Consider contacting the manufacturer of your device if the battery does not easily pop out of the device by design, but if not, the battery recycling center of your choice should at least know additional steps you can take.