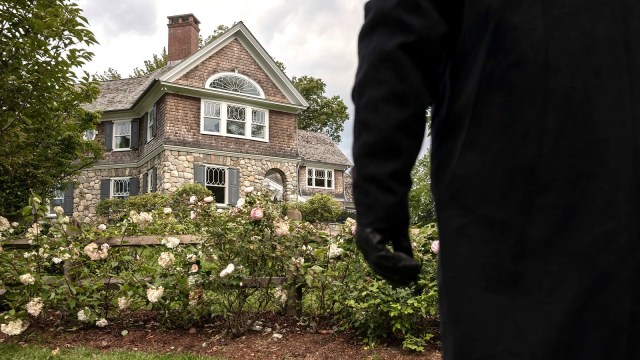 Netflix’s The Watcher is based on a terrifying true premise. Think about it—an unknown person sending you letters, watching your family, and who knows more about the inner workings of your own home than you do, is horrifying. As scary as that is, add a few components of creepy neighbors, unexplained phenomena, and a few uninvited house guests to the mix, and we are going to need to move. Like yesterday. Join us as we go through seven of the times The Watcher made us want to put the Brannock’s house on the market for them.

If we have learned anything from our years of watching scary movies, it is this: any house that has some old creepy historical aspect like a dumbwaiter, servant’s quarters, a utility staircase, etc., it is definitely going to be haunted. Whether it’s haunted by people or ghosts is usually yet to be determined, but the minute we saw that dumbwaiter in the house, we knew it was bad news.

When a mentally disturbed grown man from next door just casually popped out of it, that was it for us. Why this man enjoyed riding that claustrophobic windowless box up and down the house is beyond us. Regardless, the minute he jumped out of that thing, we were ready to help the Brannock’s pack.

The realtor who ‘plays by the rules’

As many are already aware, The Watcher is overall based on a true story, although quite a few creative liberties were taken in the series. One fun (and true) fact we found out from the series came through a scene with the realtor who sold the family the home.

In the series, the Brannock family discovered there were several murders in the home before they moved in. When they confronted the realtor about it, he explained he did not have to disclose that information in the state of New Jersey without being directly asked.

Upon further research, this law varies from state to state. For example, in California, it’s mandatory to disclose murders but only if they have occurred within the last three years. Other states don’t have to disclose at all, and states like New Jersey only have to disclose if directly asked. Not only was this scene horrifying in the series, it has now traumatized us in real life too.

Do you know what’s in the basement?

Basements are creepy. There is just no getting around it. You can dress them up with carpet and a pool table, but the fact remains, there is just something weird about them, especially the unfinished kind, such as what the Brannocks moved into. Take one basement, unfinished no less, and add a creepy letter alluding to things (or people) being in the basement, and we are out of there. One of the letters from “the watcher” asked if they knew what was in the basement. What could be in the basement? Tunnels, dead bodies, ghosts? Tunnels full of dead bodies that turned into ghosts? Basically, whatever is down there, we don’t want any part of it.

While the series did take several liberties with the storyline, the letters stayed very true to the originals that the real family received. The basement letter was real, and that exact question was actually asked. We don’t know about you, but that’s around the time that we would have been cementing the basement door shut and putting the house on the market.

In a very dark and twisting plot line, the security cameras in the Brannock home caught Mr. Brannock in bed with a young woman. The family is thrown into turmoil, assuming the father has had some sort of affair. Then the plucky security system man, Dakota, discovered that the woman was never seen coming or going, she was just…there.

The ghost girl is seen dancing around the room, touching Mr. Brannock, and even climbing into bed with him all while he sleeps peacefully. Whether the girl is in fact a ghost or just another tunnel visitor is not really clear, but what is clear is that we would never be sleeping in that house again after that footage.

In one dramatic scene, the family stumbled across some old underground tunnels stemming from their basement. Upon further investigation, they found a man who moved across the beam of their flashlight and almost gave them a heart attack. The man then scurried off as the Brannocks set off in hot pursuit.

During their chase they came upon the man’s underground bachelor pad. They found a room, a bed, and even food. Someone had clearly been staying down there for a while.

Without giving away too much of the ending, suffice to say, the realtor, Karen, had a very memorable night spent in the home. After a long leadup of phone calls, overflowing bathtubs, and chase scenes, the evening culminated in one horrifying moment. An ominous man emerges from the staircase. He does not come down the staircase; he comes from within the staircase.

Apparently, that home is just full of secret tunnels, entrances, and uninvited guests. The leadup to the scene is a maze of horrifying twists and turns. By the time we got to that particular scene, we were more than ready to call it a night. Once we saw him emerge from those stairs, we were in a race with Karen to get to the door.

Every scene with ‘Pearl’

If there were a prize for the creepiest actress ever, Mia Farrow would win it. Truly, she has a gift. After seeing her in Rosemary’s Baby and now The Watcher, we have a feeling she will be haunting our nightmares for a long time. Farrow plays “Pearl,” the intrusive, socially inept, and downright creepy next-door neighbor. She is also the sole caretaker of her brother Jasper, whom you may remember from earlier as the man in the dumbwaiter. That family tree seems to only have one limb.

Pearl and Jasper are loosely based on real neighbors of the original family who were suspects in the actual Watcher case. Pearl is obsessed with the preservation of the home, so she makes a good suspect, especially with the creepy pigtails and her way of shrieking things when she was unhappy. In the actual case, the real Pearl and her oddball brother were cleared as suspects.

One series, seven episodes, and seven horrifying moments that had us yelling at the Brannock family to cut their losses and move on. Let’s be honest, most of us would have been out the door from the very first creepy letter and pretty much every moment after that. If we had to narrow it down, these are the seven moments that really sealed the deal for us. Creepy letters, weird neighbors, unexplained phenomena? It’s time to start packing.