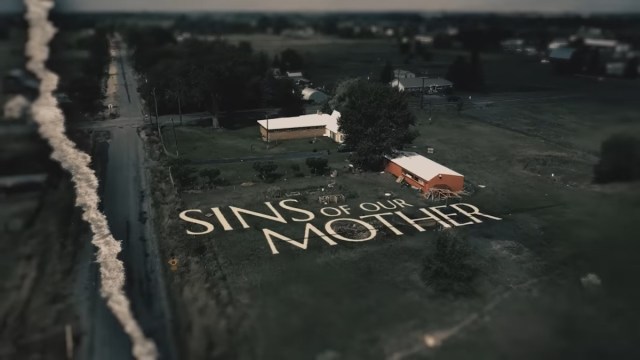 Sins of our Mother is the disturbing Netflix true crime documentary that you have to see to believe. Full of plot twists and turns, the details of this case are even more shocking than the headlines. Told from the viewpoint of Lori Vallow’s sole surviving child Colby Ryan, shocking new information is revealed as the true story around this cult case unfolds. We’ve collected and compiled 7 of the most unbelievable deep dark details of this true crime doc that you will just have to be read to believe.

The details around Lori Vallow and Chad Daybell’s wedding are strange to be sure, as doomsday beliefs, missing children, and dead spouses all surrounded this couple’s big day. But there is one additional interesting fact about their marriage that is exposed through the documentary. It turns out that Chad would make husband number five for Lori. It is revealed that she was not married just once prior to Chad, but an additional four times. It certainly seems Lori was searching for something, and she thought she had finally found it in Chad. It’s just too bad that when she found what she was looking for, there were a few things in the way, namely her husband Charles and Chad’s wife Tammy. But before long, both of them would be dead.

Chad and Lori were married in Hawaii a mere 14 days following Chad’s late wife Tammy Daybell’s memorial service and less than a year after Lori’s husband Charles’ untimely death. It was also discovered that Lori had ordered a malachite wedding ring on her late husband’s Amazon account, even while Tammy was still alive. Yikes. These two not only didn’t play the part of the bereaved spouses, they didn’t even bother to cover their tracks. And while Lori had high hopes for hubby number five, this marriage would turn out to be arguably the most disastrous of them all.

The documentary gave viewers new and shocking insight into the inner workings of this bizarre case – including body cam footage from officers on the scene following Charles Vallow’s death. Following the incident, Lori is seen on bodycam answering the officer’s questions. Her dead husband is lying inside the home — shot by her brother — while her children sat in the car a few feet away and Lori is joking with the officers about all the commotion disturbing her neighbors. Lori is seen jokingly gesturing toward the neighbors saying “Sorry, neighbors!” as she laughs about the commotion her husband’s death has caused in the neighborhood.

The lighthearted conversation she is seen having with the officers seems casual, even jovial at times. It is certainly not the appearance of a grieving or even particularly concerned wife. It’s a jarring scene in the documentary, further driving home the point that Lori Vallow was certainly not as innocent as she initially appeared.

Four people dead, one tased, one shot at, and at the center of it all was Alex Cox. From Charles Vallow to the missing children and even to Tammy Daybell, Chad Daybell’s wife, all signs pointed toward Alex Cox, Lori Vallow’s alleged enforcer. But amazingly just as police were closing in, Alex Cox mysteriously died of natural causes.

Alex had abruptly recently married Zulema Pastenes — another of Daybell’s followers — in a Las Vegas ceremony. The wedding was so abrupt that Zulema’s own son Joseph — who found Alex passed out in their bathroom — did not even know his name. The 911 call reveals that when asked Alex’s name by the operator, Joseph admits he is not sure. Bizarre.

Alex subsequently died and the cause of death was ruled as bilateral pulmonary thromboembolism, which his mother Janis did confirm ran in the Cox family. A thorough investigation was performed as the timing seemed beyond coincidental. Was it murder? Suicide? Or just a freak occurrence? As far as the investigation could see, it was a poorly-timed natural occurrence. Alex will never face charges for his alleged crimes and without him, the world may never know what truly happened to little JJ Vallow and Tylee Ryan.

Lori believed her children were ‘zombies’

Chad Daybell’s belief system was certainly not mainstream. He believed that he and he alone could determine if people were of the light or if they were what he called “dark spirits”. Daybell even developed an entire ranking system, claiming that people were on a numeric scale from D(dark) all the way up to where he was at L(light). The dark spirits he believed lived as zombies, in the bodies of former regular people whose spirits had left their bodies – allowing a dark replacement to enter. Chad believed his own wife Tammy was one of them, that Lori’s son Colby’s wife Kelsee was one of them, and he even believed little JJ and Tylee were also among them. Unfortunately, so did Lori.

She even went so far as to tell a fellow member of the cult that little JJ had been acting ‘like a zombie’ all day by climbing on cabinets and even destroying a picture of Jesus. She appeared so disturbed that she had called in her brother Alex to come and take JJ, under the ruse of calming him down. When the two returned JJ looked to be asleep on Alex’s shoulder, investigators now believe that when they returned, JJ had actually been dead. Investigators feel that Lori’s belief in this odd ranking system and Chad Daybell’s authority to create it ultimately led to her children’s untimely death. Although Lori has not elaborated on details of what happened to her children or why they were killed, this theory seems most plausible to investigators.

It is a detail of their deaths so bizarre that its hard to believe without seeing the proof, but oddly enough Daybell created documentation of this ranking system, almost a road map to the children’s deaths. If family members could have seen the documents, would things have been different? Well, as it turns out one family member did see the document and two more had it sitting, unopened in their e-mail inbox, for months.

The documentary reveals that Charles Vallow warned police that his wife was dangerous just before his death. He had called police when he returned from a trip to find Lori and the children missing. Bodycam footage of the officers on the scene revealed that Charles disclosed that Lori threatened to murder him, claiming he was a man named ‘Nick Schnieder’, who had taken over her dead husband Charles’ body. Charles gave all of this information to the police, including his fear that Lori would hurt him and the children. It was clear the police did not take him very seriously. They told him that since no crime had been committed at that time that there was really nothing they could do but they would check in with Lori the next day.

But the police weren’t the only ones Charles Vallow tried to warn, it turned out he had sent e-mails, text messages, and more to all of Lori’s family members including her son Colby and his wife Kelsee, Janis, Lori’s mom, and both of her brothers. At the time Lori had been accusing Charles of affairs and had told family members they were getting a divorce. Thinking it was just a marital spat at the time, Colby and his wife didn’t open or read the e-mails, not until months later. When they finally did, they were horrified by what they found. Charles had forwarded them an e-mail he had found from Chad Daybell to Lori, outlining a sort of family tree for her, of which family members were rated as ‘dark spirits’, aka demons, and others ‘L’, light. Both Tylee and JJ were on the list as ‘dark spirits’, which is what police believe was Lori’s motive for murder.

In another bizarre detail of this already very bizarre case, it turns out Lori Vallow was once a contestant in the Mrs. Texas pageant. She even goes on to say in her interview portion how important being a good mother is to her. Ironic. She is seen in this photo looking every bit the all-American mother and wife, it’s hard to believe in just a few short years, she will be giving interviews of an entirely different nature and her dedication to motherhood will be called into question under entirely different circumstances.

On an additional sidenote, Lori was also a contestant on Wheel of Fortune. She even spoke about having her “wonderful husband” at home taking care of her “wonderful children” while she competed. Ironically enough – that particular husband was sexually abusing her son Colby and turned out to be abusive to Lori. And the 1-year-old daughter she also spoke of would be dead before her 18th birthday. It is almost an eerie foreshadowing of how Lori’s life from the outside looks nothing like the reality of the inside.

Even more bizarre, her alleged enforcer — brother Alex Cox — was a standup comedian. He even made jokes about tasing that same husband Lori talks about on Wheel of Fortune – a crime of which he was actually convicted of. There are just so many odd details of this family saga, each chapter unfolding new and bizarre occurrences, coincidences, and details too strange to be believed.

While much has been said about Lori’s brother Alex Cox, she actually has another brother Adam Cox. Adam did not show up as much in the Netflix series but was a big part of the 20/20 documentary on the case. Adam was the brother that tried to speak out about Lori’s odd and dangerous new belief systems but strangely enough, was then cut off from the family.

Oddly the entire Cox family including Lori, Alex, and even Adam’s own mother Janis, stopped speaking to him saying that he was disloyal to the family for speaking with Charles and for not supporting Lori. Adam fought to convince the family that they needed to be more concerned about Lori’s new friends and belief system, but the family refused to listen and began to cut him off. They stopped communicating with him or taking his calls, they even told him he should be less supportive of Charles and more supportive of Lori. Even following Charles’ death the family still maintained this stance with Adam and it was not until the children ultimately turned up dead that the family realized the grave mistake they had made.

Sins of Our Mother is a case where the devil is truly in the details. While the headlines of this case were shocking enough, it was the details that made viewers believe that truth really is stranger than fiction.